by Richard Broinowski *
Notes of his talk at the ICAN sponsored public meeting – “The Nuclear Weapon Ban Treaty”, held in Adelaide, July 7. 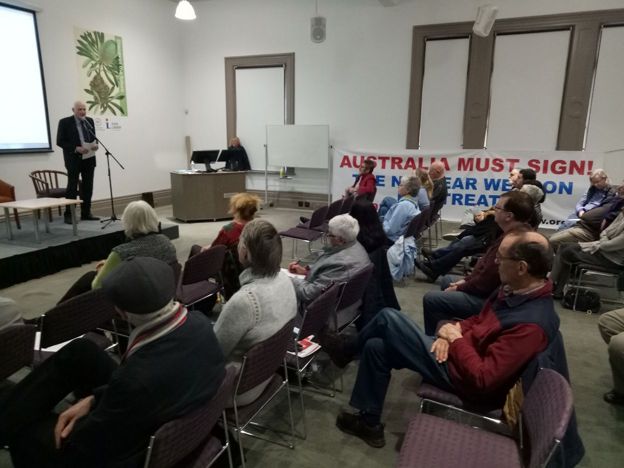 Where from Here on Disarmament? What was decided in Singapore? Does North Korea have to disarm its nuclear arsenal immediately, or gradually and sequentially as China suggests?

Will the US insist on complete, verifiable and irreversible (CVI) disarmament before even beginning to lift sanctions? The Chinese want sequential disarmament matched by a series of guarantees from the US.

Washington hawks want complete and utter disarmament before any sanctions are lifted. Only time will tell which occurs.

Meanwhile no concrete evidence of any progress on disarmament to date, although US teams have been busy in negotiations with North Korea at Panmunjom over recovery of war remains of US soldiers. North Korea’s Nuclear Arsenal and Supporting Assets are huge, including bombs, missiles, testing facilities, re-processing plants, reactors, mines, storage and training facilities.

A gesture has already been made with the blowing up of an underground testing facility and deconstruction of a rocket engine testing facility. Also, North Korea has stopped anti-American rallies and its Anti-American Day, and Trump has ordered curtailment of military exercises in the South, calling them ‘provocative’, which they are, but the first time any American President has said so.

Meanwhile, dialogue between North and South Korea continues, including on re-opening of the Kaesong Industrial Zone and further joint sporting teams (including for a basketball tournament in Jakarta). International inspections will also have to be arranged with IAEA if disarmament is to proceed.

Will Trump insist on US inspectors, or will he leave it to the IAEA? One hopes the latter. Reactions in the military/industrial complex have been predictable: when Trump announced a $1.7 trillion increase in expenditure on modernising and expanding America’s nuclear arsenal in February 2018, the stocks of Raytheon, Lockheed Martin, General Dynamics, Northrop Grumman and Boeing went up.

When the Singapore summit was held on 12 June, they went down. An ineluctable movement across the globe continues to make nuclear weapons unacceptable, including Treaty of Tlatelolco (Latin American nuclear Free Zone) in 1967, Raratonga (South Pacific) in 1985, Bangkok (ASEAN n-free zone) in 1995, Treaty of Pelindaba (Africa) in 1996.

Now we have advent of the Treaty on the Prohibition of Nuclear Weapons, which has global implications. As of 20 September 2017, 122 countries voted in favour, including Saudi Arabia and Iran, now signed by 59 countries, and ratified by 11.

50 must ratify by 2019 for the Treaty to come into force. It is just possible that the disarmament of North Korea will continue, accompanied by a peace treaty and a US guarantee of not fomenting a regime change in Pyongyang.

If that occurs, a possible next step could be the development of a nuclear-free zone in North Asia, including North and South Korea and Japan.