This article was a leaflet endorsed by a number of peace groups and handed out as a four-page A4 flyer at the Festival of Ideas in Adelaide, on our new Space Agency, Friday 13th April.

So now Australia has its own Space Agency … 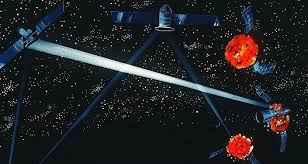 ……. probably inevitable, given that every other OECD country, except Iceland, has one, and that we increasingly rely on the peaceful use of outer space as a resource for telecommunications, environmental imaging, etc. Humanitarian uses of these include weather forecasting, early warning systems for disaster management, and environmental resource management, such as food security.

But as with nuclear power and drone technology, peaceful and military uses are often interlinked, and the peaceful used as a cover for the military.

So how do we ensure ours is only used for peaceful ends?

The peaceful use of space is threatened by:

Space had been militarised for at least 60 years. Now weaponisation is looming as an imminent, more terrifying threat. In 2007 China launched a missile to illustrate that it could blow up satellites in space. And President Trump has just ordered the establishment of Space Force, a sixth branch of the military to ensure “American dominance in space”.

What role will Australia play in this?

Are we “Joined at the hip” as Turnbull claimed? Or the “Deputy Sheriff” as per Howard? Will we continue our unquestioning subservience to US foreign policy which has led us into so many unnecessary conflicts – often illegal under international law?

Isn’t space supposed to be peaceful?

The Outer Space Treaty, recognized by over 100 nations including the US, limits some military activity in space. The treaty outlaws nuclear weapons and weapons of mass destruction, but does not prohibit nations from acting defensively, so nations can simply decree that all their “defensive” military activities are peaceful. There is also disagreement as to what constitutes “space weapons”.

As more nations enter space and develop advanced military technologies, space defenses have become necessary — if not critical. Russia, China and the US all have highly sophisticated anti-satellite weapons, which could take down opponents’ key assets like radar and GPS leaving them militarily exposed. The US is the most space reliant military in the world.

Thus space is opening up as a new frontier in the fight for global dominance. The next great power war will could well start in space.

Trump’s establishment of the new Space Force has to be seen in this context. However, many expert observers see it more as tub-thumping for the benefit of the media and electoral fans. Essentially it takes the existing (Air Force) Space Command and gives it a new label.
The Space Command does quite a bit already. It has dominion over all Department of Defense satellites (classified and unclassified), watches the entire globe to monitor missile launches, and surveys the location (and other information) of every satellite other nations launch into space.

The risks to the planet are obvious. Australia needs to be an agent for sanity, working for peace, not “joined at the hip” with the US.

Implications for Australia – we need:

Firstly, our government will be keen for a slice of the pie, as there would obviously be considerable economic benefits for SA. Jay Weatherill had lobbied vigorously for a national Space Agency to be established, with the operational headquarters in SA – highlighting SA’s previous experience with Woomera, and the government’s success in attracting high-tech industries to Adelaide – as of Sept 2017, 60 companies involved in the space industry. Amongst these are at least half of the world’s 10 largest weapons manufacturers – Lockheed-Martin, Boeing, Raytheon, BAE, Northrop Grumman and General Dynamics.

Whilst this brings major investment and employment opportunities to SA, it does raise a number of questions:

The last point has particular implications with regard to the nuclear industry, which is (and always has been) strongly interlinked with the military. With the world’s largest uranium mine in SA, and the industry languishing because it can’t get rid of its waste, we will continue to be a target for lobbyists for nuclear energy, nuclear power for the subs we’re going to build, and waste dumps (the industry has not given up on a large international dump). The continual stream of articles in the Murdoch press advocating these moves is an indication of the ongoing pressure from the industry.

The more our economy becomes dependent on weapons-related industries, the less freedom will we have to resist these pressures.

Independent and Peaceful Australia Network (SA). A network of organisations and individuals aiming to build public dialogue and pressure for change to a truly independent foreign policy, in which our govt. plays a positive role in solving international conflicts peacefully.
Email: stoifan@adam.com.au

A Coalition of groups and individuals committed to oppose all aspects of the nuclear cycle, with a focus, in the present context on nuclear waste dumps. www.facebook.com/antinuclearsa/

International Campaign to Abolish Nuclear Weapons Winner of the 2017 Nobel Peace Prize in for spear-heading the successful campaign for a UN Treaty toban nuclear weapons. www.icanw.org/au/

Campaigns for an Australian independent foreign policy that breaks free from its military alliance with the US and stops acting as US deputy sheriff in our region.  A policy that promotes global peace, fair trade and sovereignty of countries and people. http://www.spiritofeureka.org/  Email: soeurekasa@gmail.com