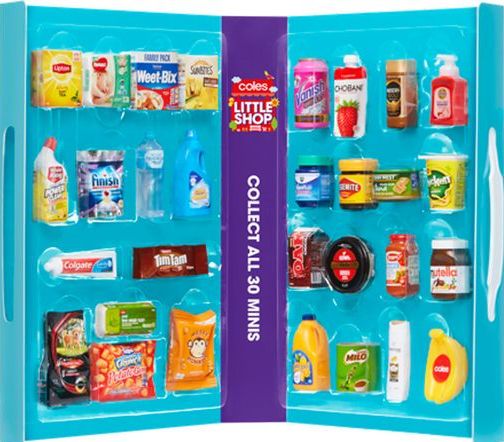 A week ago, I spent some $60 ish at our local Coles and was offered two “Free Collectibles.” Thinking it was another desperate attempt to bribe parents and grandparents to shop there instead of Woolworths I accepted. The packs of animals they offered previously were reasonably informative for children and fairly innocuous if one remembered it was a ploy to beat the opposition.

So I was handed two plastic bags containing two plastic objects. Already my cynicism ramped up as these “Guardians Of The Planet” happily dispensed more polluting plastic while bragging about their responsible elimination of “single use plastic bags.” I then opened these small additions to landfill and was disgusted to find shrunken products inside. My “freebie” was a diminutive tube of “Colgate” toothpaste, accurate in every detail and a similar miniature replica of a jar of “Nutella.”

As I tossed these items disgustedly into the rubbish bin, part of me had to be impressed by the evil genii that dreamt up this latest capitalist venture. So now they can appeal to preschoolers and imbed these brand names in the little ones minds. Parents are desperate to collect ALL the plastic brainwashers for their precious infants to use in dolls houses or mini shops. Teachers see a chance to collect the excess objects to develop the student’s ability handling money.

Diabolical!!! Coles succeeds in convincing shoppers to spend their cash at their shops with “give-aways” that the product manufacturers pay for. Children, their parents and grandparents are bombarded with the logos each time the “collectibles” are used. There are even some sad sickos who are so desperate to own particular items they will pay $50 for one and $2,000 for the full set. Am I being unfair to suggest there may be some hard to get “freebies” to keep shoppers spending more?

So pumped up with rage and abhorrence I launched into a soap-box session with some family members expecting a lively discussion of like minded consumers. An examination of their body language, exchanged glances and mention of “party-pooper and wet blanket” and I saw that AGAIN I was being seen as “Loonie Leftie Lyn.”