People from more than twenty countries and a diverse range of socio- economic and cultural backgrounds came to the Victorian goldfields around the early 1850s bringing with them various social views and political ideologies.  Following the industrial revolution in the early 19th century and the turbulence of many wars in Europe at that time, new social theories developed about equitable treatment of working class people and the role of labour and capital. 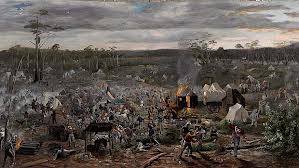 The principles enshrined in The People’s Charter 1838 from Britain summed up the digger’s democratic aims and were included in the Ballarat Reform League Charter written and adopted by them. A copy was presented to the Victorian Colonial Government a week later. However, the Government’s reaction to the Reform League’s Charter was to send troops to Ballarat.