After many land wars by Aboriginal nations against British colonialism, the battle at the Eureka Stockade was fought on 3rd December 1854. It became the most significant class conflict in the colonial history of Victoria. It remains the major armed rebellion in the History of Settler Australia. The Eureka rebellion and Southern Cross flag have become powerful symbols of a major turning point in Australian politics. 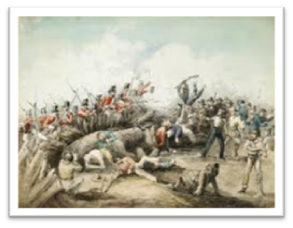 Eureka was the climax of civil disobedience in the Ballarat region. During the gold rush era, the diggers objected to very expensive mining items and Miner’s License, taxation (via the license) without representation and the repressive actions of the government through its police and military. On the other hand, the merchants and pastoralists (squatters), in conjunction with their parliamentary representatives overwhelmingly controlled the Victorian Legislative Council. They were intent on tax avoidance themselves.

The rebelliousness of the miners in Ballarat grew from The Ballarat Reform League movement and concluded with an organised battle at the Eureka Stockade against the colonial forces.

Keep reading via the links below…

The Struggle for Democratic Rights

The Influence of Chartism