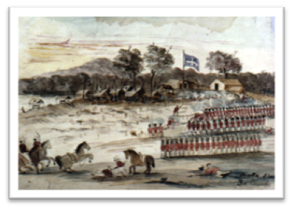 Support for the Eureka rebels amongst the local population of Victoria was widespread. Massive meetings took place in Melbourne, where more than 10,000 people attended mass meetings in the city streets and were outspoken in their support of miners at the Eureka Stockade. Resolutions were accepted insisting on change.

The 13 Eureka Rebel ‘leaders’ who were tried for treason were all acquitted by the court jury.  A commission that enquired into conditions on the goldfields saw to the Miner’s Licenses being abolished and replaced by a Miner’s Right of one pound a year. This entitled the holder of the right to vote in Victoria’s Legislative Council elections, as the vote was available to those who paid the £1 per year for the Miner’s Right.