On Saturday, 11 November 1854 an assembly of more than 10,000 miners met at Bakery Hill. At this meeting, the Ballarat Reform League was formed, with the Chartist, John Humffray being elected the first Chairman. Kennedy and Holyoake, who had involvement with the Chartist movement in England, were also elected leaders of the Ballarat Reform League. In fact large numbers of miners had earlier connections with the Chartist movement and the social turmoil that occurred in Britain, Ireland and continental Europe of the 1840s.

In forming its goals, the Ballarat Reform League took on the British Chartist movement’s objectives.

1. A full and fair representation

3. No property qualification of Members for the Legislative Council.

Immediate objects of the Reform League were:

The immediate disbandment of the Gold Fields Commissioners and the abolition of the Miners’ and Storekeepers license tax.

The Bakery Hill meeting affirmed “that it is the inalienable right of every citizen to have a voice in making the laws he is called on to obey, that taxation without representation is tyranny”. The meeting also determined to secede from Britain if the situation did not improve….

“If Queen Victoria continues to act upon the ill advice of dishonest ministers and insists upon indirectly dictating obnoxious laws for the Colony, under the assumed authority of the Royal Prerogative, the Reform League will endeavour to supercede such Royal Prerogative by asserting that of the People which is the most Royal of all Prerogatives, as the people are the only legitimate source of all political power.”

During the following weeks, the League sought to negotiate with Commissioner Rede and Governor Hotham, on both the matters involving Bentley and the men being tried for the burning of the Eureka Hotel, and on the larger issues of abolition of the license, democratic representation of the miners, and disbanding of the Gold Commission. Commissioner Rede’s response was to increase the police oppressive “license hunts” and call for reinforcements from Melbourne. 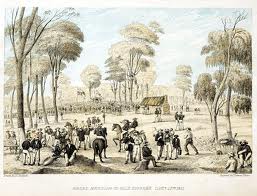 On November 29th a meeting of some 12,000 miners heard the Reform League delegation explain its failure in negotiations with the Colonial establishment. The miners declared open resistance to the authorities and burned the despised licenses.

Response was swift and the police were ordered to conduct a license search on 30 November. Eight miners without a license were arrested, and the military had to rescue the arresting officers from the angry mob that had gathered.