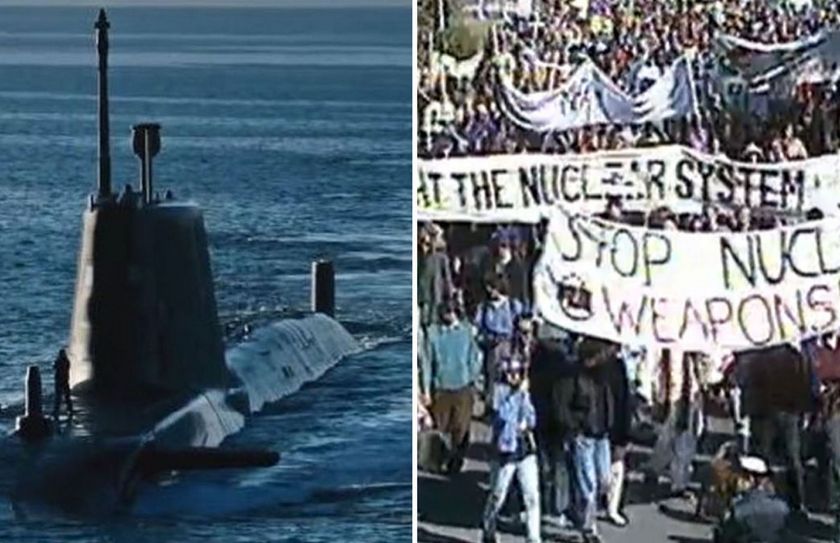 The response to Scott Morrison’s decision to embrace Aukus and nuclear submarine technology has sparked opposition in the Australian community and overseas. A coalition of concerned people and organisations is being formed to challenge and oppose these decisions.

There has been a rapid response in the Australian and international community expressing concern and opposition to the Scott Morrison Government’s embracing of the Aukus war pact and moving to acquire nuclear powered submarines.

The mass media, apart from some reports by the ABC, has in general applauded these government decisions which are claimed to make us more safe from “security threats” and it has been left to the independent media such as Pearls and Irritations to seriously analyse and warn of the dangers of the Aukus and nuclear submarine decisions.

Other community voices and international voices have however raised their voices loud and clear. Here are some of them.

Within two days of Scott Morrison’s announcement, 18th September, a zoom meeting called by IPAN ( the independent and peaceful Australia Network) and the AABCC (Australian Anti-Bases campaign coalition) to discuss these development attracted over 100 participants. The deep concerns expressed at this meeting resulted in the production of a Statement headed: “Australians speak out against nuclear submarines and AUKUS”

It commences “Australia cannot become a staging point for the U.S. military, we cannot abrogate our sovereignty to the U.S., we cannot encourage nuclear proliferation and risk environmental catastrophe.”

Within days, a petition produced from the same meeting and calling on the Australian government to withdraw from Aukus and cease acquisition of nuclear- powered submarines was produced on change.org. It has attracted 15,148 signatories (as at 3rd Oct.21).
It commences: ” No Nuclear-Submarines; End U​.​S. dominance; Healthcare not warfare………

Shortly after the government announcement, 200 people gathered publicly in Adelaide to voice their opposition to the proposed acquisition of nuclear submarines and the Aukus pact calling for a nuclear free Australia.

The MUA (Maritime Union of Australia) made a public statement:

“No to nuclear submarines-jobs & health, not nukes”…… and saying:

“Today, on the International Day of Peace, the Maritime Union of Australia (MUA) declares its total opposition to the reckless announcement by Scott Morrison that Australia would be developing nuclear-powered submarines as part of a military alliance with the US and UK.”

Friends of the Earth (FOE Australia) produced a petition:” Say No to subs …..The Australian Government must withdraw from AUKUS, stop the development of nuclear submarines and end integration into the U.S. military.”

The National Tertiary Education Union spoke out against nuclear subs plan
The NTEU is alarmed by the announcement by the Australian Government of its agreement with the United States of America and the United Kingdom to build nuclear powered submarines, with no apparent regard as to the costs to be incurred or regional political impact of the arrangement.

The CICD (Campaign for International Co-operation and Disarmament) made this Public Statement on AUKUS Trilateral Agreement in which they said: “The CICD says this government is NOT ACTING IN OUR NAME. Australia does not need this agreement that can only draw Australia into another US War. Buying submarines that are offensive, not defensive is a waste of time and money..”

The Medical Association for Prevention of War (MAPW) issued a statement:” The AUKUS agreement represents a threat to human health and global security.

And then there is the International opposition to Aukus.

The New Zealand Government’s announced continuation of its anti-nuclear policy, which will ban any future Australian nuclear submarines from entering New Zealand waters or ports, has been welcomed by long term peace activists, the International Affairs and Disarmament Committee of the Aotearoa /New Zealand Peace Foundation.

The Kiribati President says AUKUS nuclear submarine deal puts Pacific at risk
He says it puts the region at risk and raises some troubling memories. The people of Kiribati recall when the UK and US tested nuclear weapons there.
Then the islands were part of colonial Britain and between 1957 and 1962 more than 30 nuclear tests were carried out.

“Our people were victims of nuclear testing … we still have trauma … with that in mind, with anything to do with nuclear, we thought it would be a courtesy to raise it, to discuss it with your neighbours,” he says.

Malaysia has joined criticism of Australia’s plan to build nuclear-powered submarines, warning it could spark a renewed arms race in the region. Mr Yaakob said he had raised concerns about the project with Mr Morrison, and warned that the nuclear submarine project might heighten military tensions in Asia.

Efforts have commenced to form a national coalition to challenge and oppose the Scott Morrison government’s decision to join the Aukus military pact and acquire nuclear submarines. It is expected that this will be supported by peace groups, trade unions, faith organisations, environmental groups, those opposing nuclear weapons and a nuclear industry and all who care for a peaceful and safe future for Australians.