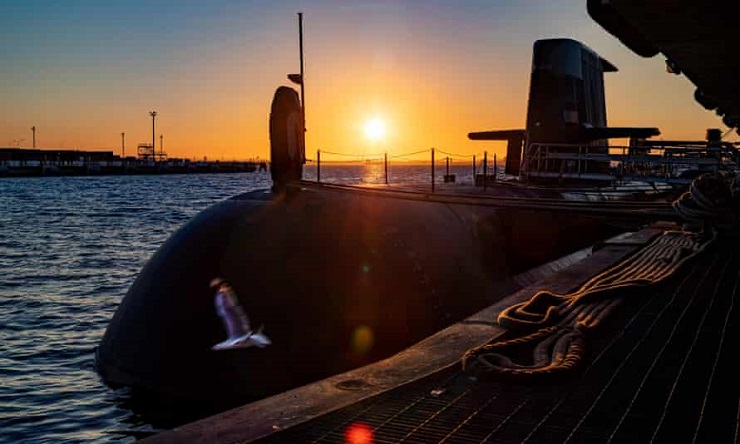 Australia has just confirmed that its allegiance to the United States exceeds its own interests, and even its relationship with other, previously friendly nations, such as France. The triggering point for this degradation of Australia’s position in the world was the decision, announced this past week by prime minister Scott Morrison, to ditch the planned purchase of French submarines and replace them with a nuclear-powered option from the United States.

The agreement with France has existed for several years, although the actual construction of the planned submarines had not actually started. They were not expected to become available to the Australian Navy for at least a decade, although there has never been a publicly available explanation as to why their construction should take so long.

To compound the betrayal of the French contract, Prime Minister Scott Morrison had held talks with his French counterpart Emanuel Macron as recently as the summit of western leaders held in England earlier this year. Unknown to the French, the Australians had already agreed a deal with the Americans and the British. As recently as August 30 this year the French and Australian defence ministers had held a meeting and had issued a statement confirming their bilateral cooperation, including on matters of defence.

Yet only 16 days later the French discovered that the Australians had in fact made a deal with the Americans and the British, the immediate consequence of which was the cancellation of the $90 billion deal with France. The French foreign minister Jean Yves De Drian was furious, calling it “a stab in the back. We had established a trusting relationship with Australia and this trust was betrayed.”

To further add to Australia’s dependence upon the Americans it was also announced that the submarines will be equipped with the United States manufactured Tomahawk missiles, which are an old technology and vastly inferior to their Russian counterparts.

The real reasons for Australia’s conflicting role with China lie in the demands of the United States security partnership. In a speech given two years ago to an Australian audience of security and defence writers, the United States academic John Meirsheimer spelt out the political reality to his audience.

“Right”, said Meirsheimer to his audience, “you have a choice here: you can go with China rather than the United States. There are two things I will say about that. Number one, if you go with China you want to understand that you are our enemy. You’re either with us or against us and if you’re friendly with China, you are undermining the United States in this security competition.”

This warning calls to mind the well-known quote from Henry Kissinger. “to be an enemy of United States can be dangerous, but to be a friend is fatal.”

This is a truism that successive political leaders in Australia have taken to heart. It helps to explain Australia’s eager participation in the United States wars of choice, from Vietnam in the 1960s and nineteen seventies to Afghanistan 2001-2020 and participating in the wholly illegal invasion and occupation of Iraq, 2003-to the present.

It is a subservience reflected in both major political parties. Labor Prime Minister Gough Whitlam withdrew Australian troops from their participation in the Vietnam war in 1972. The Americans never forgave him for that and together with their lackey the Governor General John Kerr, engineered the overthrow of the Whitlam government in 1975. It was an experience that has influenced Australian politics ever since. It helps to explain the extraordinary subservience of the Labor Party to United States foreign policy misadventures.

The reaction of China’s governing party was also brutally frank. In an editorial in the party mouthpiece, the Global Times, on 16 September 2021 the Times said that the United States is “hysterically polarising its alliance system.” It publicly doubted the claim by Washington that the submarines would not carry nuclear weapons describing such assurances as “not reliable”.

The editorial further said that “Washington is losing its mind by trying to rally allies against China, creating antagonisms and destruction beyond its control.” The editorial noted that there used to be no grudges between China and Australia, but that in pursuing its one-sided policy tilting towards the United States “Australia has turned itself into an adversary of China.”

The editorial went on to issue a blunt warning to Australians. If the latter becomes involved in the disputes in the Taiwan Strait and the South China Sea, then “military targets in Australia will become targets of Chinese missiles.” Is advised Australia “to prepare for the worst” as a consequence of becoming an anti-China spearhead. Australia cannot claim that it has not been warned. Unfortunately, those warnings are likely to fall on deaf ears. Australia effectively sold its soul to the United States more than a generation ago, and there is absolutely no sign in the political leadership of any party except the Greens, that the dangers of continuing along this path are recognised.

The latest decision by the Morrison government even more firmly entrenches Australia within the American view of the world. In a little noticed additional comment made at the same time as the submarine decision was announced, the government said that there would be an increase in the United States use of naval facilities in the country.

There has been no public debate about this decision and indeed most Australians are aware of the extent to which the Americans already use Australian facilities. United States satellite spying facility at Pine Gap in the Northern Territory is already a “no go” zone for Australians. The submarine decision really confirms that to all practical intents and purposes Australia has no independent foreign policy, but is simply a lackey of the United States.

* an Australian-based former Barrister at Law