Shirley spoke on behalf of IPAN (Victoria). This speech was one of many delivered in Melbourne at Queen Victoria Market, 4 July 2021. 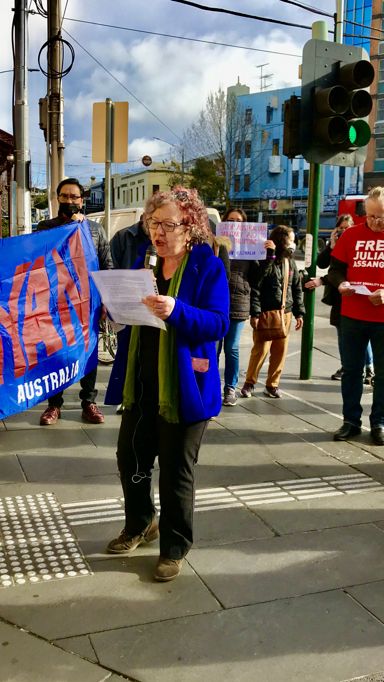 Thank you for coming to this 4th July rally for peace – No Australian involvement in US-led wars – No war with China.

I acknowledge that we’re on the stolen land of the Wurundjeri People of Kulan nation. We pay our respects to the First People’s culture, their elders’ past, present and emerging.  Sovereignty never ceded, always was and always will be Aboriginal land.  Australia’s independence cannot be realised without genuine Sovereignty and a just Treaty with the First People.

Independent and Peaceful Australia Network is a broad national network of over 50 organisations and many individuals who’ve come together to campaign for an independent and peaceful Australian foreign policy, to end Australia’s involvement in US-led wars and the US-Australia alliance.  We call for the removal of all foreign troops and bases from Australia.   (Information table and if you want to find out more about IPAN.)

Tomorrow, 4th July is America’s Independence Day.   250 years ago, America fought and won its independence from Britain.  150 years later and America has been invading, occupying, interfering, bombing and relentlessly waging wars of aggression against other countries and people.  In the past 50 years, America has invaded and unleashed wars of devastation on the people of Vietnam, Afghanistan, Libya, Iraq, Syria and interfered in many sovereign countries.   It imposes economic blockades against Iran, Cuba, Venezuela, inflicting hardship and suffering on the people of these countries.

Australia can be described as the US deputy sheriff in the Asia-Pacific and Indo-Pacific region, doing the bidding for the US military and its corporations.  For many years Australia has been described as the 51st state of the US.  Australia’s defence and military are completely integrated and interoperable with the US military machine.  Globally, successive Australian governments’ military and economic policies echo the US global agendas. Australia is dominated by US economically and militarily.  Australia’s biggest corporations and banks are controlled mainly by the US interests.

Tens of thousands of US marines are permanently stationed in Darwin and more are coming. Australia hosts some of the most important US war bases outside the US – Pine Gap, North West Cape.

Since 2008 Australia has hosted biannual joint US and Australian military exercises of 30,000 troops, preparing for wars and land to sea invasions of other countries.

The preparations for imperialist war are not about defending our freedoms.  The same propaganda of fear and threat of external enemy was whipped up to justify the Australian government hitching itself to US invasions of Vietnam, Afghanistan, Iraq.  The present preparations for war with China are mainly about the economic domination and control of global resources and markets by big powers.

For more than 50 years America has economically and militarily dominated the world.

And who pays the price and carries the heavy burden and consequences of imperialist wars? It’s the soldiers and the ordinary people of all nationalities who are the main casualties of wars.  It’s the ordinary people, the working people, who carry the financial and economic burden of these wars.  Working people’s taxes pay heavily for these US-led wars.  Over the next 10 years, $570 billion of people’s taxes will be spent on Australia’s preparations and involvement in US-led wars.  On average that’s $50 billion annually of public funds taken away from public health, education, social services and urgently reversing climate crisis.  Working people’s money is not spent on defending the livelihood and security of ordinary people and the environment, but syphoned off to wars of aggression against other countries and people.