The (In)significance of July 4 for the Filipino People

Berlin was the speaker from the Filipino Delegation and who is the Chairperson, Bagong Alyansang Makabayan (BAYAN) Australia 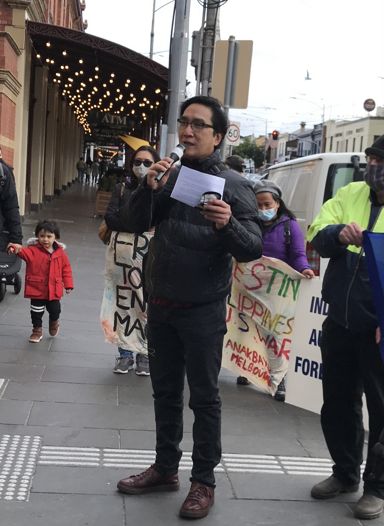 The Philippines was a colony of Spain for 400 years beginning in the 1500’s until the turn of the 19th century. Patriotic Filipinos launched an armed revolution against Spain and became victorious to the point of establishing a Republic. But this victory was cut in the bud by the coming of United States as a nascent imperialist power which took the Philippines from Spain to be its new colonial master. Another imperialist power, Japan, was also able to set foot in the Philippines during WWII controlling the country for three years. However, its imperial army was almost defeated by the People Army against Japan. But again, US returned to re-establish its hold and set up its puppet regime to maintain its neo-colonial, imperialist control.

From 1946 to 2021, the Philippines has been ruled by US-sponsored regimes. These puppet governments ensured the continuous exploitation of its natural and human resources, become the dumping ground of finished non-industrial products and to serve as a strategic military outpost in the Asia Pacific region.

Today, the United States has enlisted Asian countries especially Japan and Australia in its military alliance-war machine to protect its sphere of influence in Asia Pacific, particularly South China Sea. Thus, it is a policy of the Australian government to establish relationships with the Philippine government independently but not outside of the US-Australia defence cooperation. The Australian government provides military aid and financial assistance to the Philippine military and police forces in the name of anti-terrorism.

But we question the Australian government why it supports the Philippine government under the Duterte administration which is now condemned worldwide because of mass murder of alleged drug users and killings of activists and dissenters since it held power five years ago. In the Philippines, Duterte is the real terrorist. In fact, President Duterte can be prosecuted by the International Criminal Court for his crimes against humanity. The question is: Why is the Australian government continuing its military support to Duterte and turning a blind eye to Duterte’s human rights violations?

Is it to keep Duterte within the US-Australia alliance especially now that Duterte allows China to violate the Philippine territorial integrity and sovereignty over the exclusive economic zone in the West Philippines Sea? He even allows China to use Philippine military camps to set up telecommunication towers in exchange for bigger military aid to buy aircraft, bombs and other war materials to use against Filipinos desiring and fighting for national freedom. 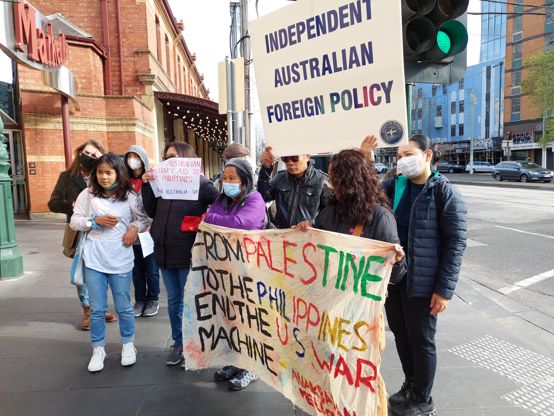 Here in Australia, the progressive and patriotic movement of Filipinos and friends of the Filipino people are in solidarity with the struggle for national freedom and democracy in the Philippines.

We have strongly expressed to PM Scott Morrison and the Secretary of Foreign Affairs Marise Payne several times for Australia to end its military support to Duterte. Now we call on the Australian government to withdraw all political, economic and military support to the despotic and tyrannical Duterte Regime now!

Finally, Australia should not be drawn into the conflict in the West Philippines Sea or be yanked in any imperialist wars for the matter. We support the call for independent foreign relations, of non-aggression and of mutual respect and cooperation among countries of the world!