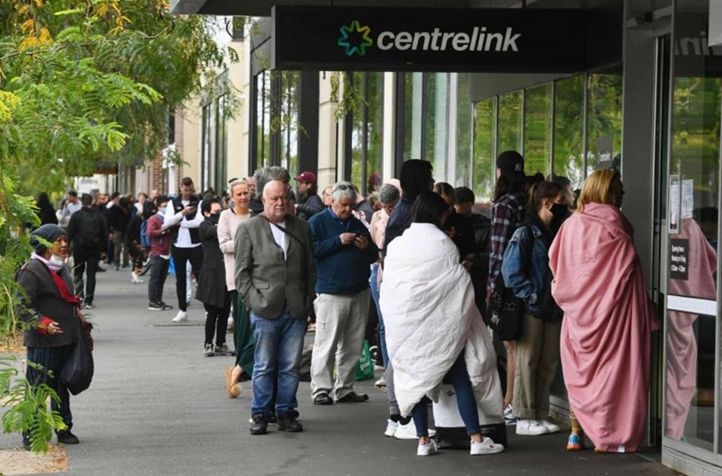 Even before the present crisis brought about by the COVID-19 pandemic, purchasing power of Australian workers due to wage stagnation and the rising cost of living was declining. In fact, this pandemic has exposed many of the faults of capitalism and highlights the need for permanent change.

Driven by pro-market economic forces, governments around the world have implemented policies designed to shrink the public sector and rely more and more on “free markets” to provide for social needs.

Some go so far as to advocate that in economic matters governments should step aside and let business guided by market forces run the economy.

What this pandemic has shown is that in times of crisis people look to governments to provide what free enterprise cannot. It is what is left of the state infrastructure that has enabled the country to cope with COVID 19.

Governments around the country are quick to claim credit for the comparatively low level of infections and deaths resulting from the pandemic. However, they mainly reacted to the organised outrage and action by those working in the medical professions, including doctors, nurses and workers involved in medical supplies.

Peoples’ concerns pushed governments around the country to base their responses to the crises on the knowledge possessed by these specialists. While some sections of the business community are chafing at the bit to “get the economy going again” those in charge have temporarily relied on the advice of experts who maintain that to revert to business as usual could do more harm than good. The situation is fluid.

The Federal Government’s fiscal response to the crises, based on pouring billions of dollars into the economy, is an admission that previous economic policies of stripping workers of pay and conditions has a detrimental effect on the economy. These policies were short-sighted, even for capitalism itself, because they resulted in people not having a level of disposable income which keeps businesses, especially small ones, afloat.

The government’s announcement that the Newstart allowance was to be doubled must have sounded like music to the ears of the unemployed, but for many, it was more like a nightmare when they tried to access it.

Things change quickly in the Covid world, but at the time of writing this article, to get it the new Job Seeker allowance, applicants will have had to spend any entitlements they received when they became unemployed.

Many people have interest-only mortgages. If they wish to pay more in order to eventually pay off their mortgage, they need a mortgage offset account. Putting money into these accounts reduces the interest payable, but is not included in the actual mortgage agreement. Under Job Seeker, they are required to use any funds they’ve saved in the mortgage offset account before they become eligible.

On top of this, they have to deal with Centrelink which is no easy task in itself. Despite the best efforts of Centrelink workers, the forms are so extensive and difficult to understand and require so much documentation, it can take four or more days to complete. All this when they may be at the lowest psychological level of their lives.

Those seeking the independent youth allowance haven’t done too well out of the government’s largesse either. It has proven so hard to qualify that many young people just give up and are forced to live with family.

It is much easier for those hoping to benefit from the Job Keeper allowance. It is designed to do just that. It will help people keep their jobs. Unlike other government payments, this one is user friendly. Perhaps this is because the $1,500 a fortnight goes to the employer and is to be used to pay the wages of those who would otherwise lose their jobs. It is also managed through the Australian Tax Office and form filling takes around fifteen minutes.

But it’s up to the employer to decide who gets Job Keeper and who doesn’t. It puts power in the employers’ hand, leaving open the possibility of victimisation. Some employers are even complaining that it’s available to people who aren’t working!

When one compares the total amount spent on business with the amount spent on the unemployed and pensioners it is obvious that through the use of billions of dollars in handouts the government is more intent on keeping the capitalist system afloat than in helping people in a time of need.

Those who are urging the government to quickly return to the “normal” way of doing business, that is, where very large numbers of workers through their labour create wealth which is expropriated by a very small number of beneficiaries, need to recognise that these days are gone.

In the early years of neoliberalism, the idea that when wealth is created everyone benefits, was used to justify the economic policies being pursued. It was stated that by creating a wealthy elite somehow the wealth would trickle down to other sections.

Of course, this didn’t happen. As many critics pointed out, wealth seems to be able to defy gravity and trickle up rather than down.

What this crisis has shown is that we need to change our economic, political and social system to allow everyone to prosper from the wealth that is created.

We can organise and force governments to: wean themselves off political donations; create a much fairer taxation system in which the burden falls mostly on those who benefit most; not be influenced by lobbyists when formulating policies and resist the urge to use public funds for the purpose of pork barrelling.

The response to the present crisis could well serve as a model for dealing with other crises such as climate change. Instead of basing decisions on the urging of corporate lobby groups, governments would do better to base them on those who are specialists in the field.

They won’t do anything unless the forces of the people are strong enough to make them.

Currently, the so-called “independent” agencies set up by governments are nothing more than window dressing to fool people into believing that the interests of the environment are taken into account when decisions are made.

This is exemplified by the NSW Government’s decision to allow coal mining under one of Greater Sydney’s reservoirs in the Illawarra. Water NSW supported by independent specialists are vehemently opposed to the project but the government gave it the go ahead anyway. It uses as a justification the approval of a body set up by the government itself.

These bodies have very narrow terms of reference to ensure they make the “right” decision in approving projects they claim are beneficial to the economy but that are clearly detrimental to the environment and in this case a threat to Greater Sydney’s water supply.

This crisis has taught us that we live in a society and not just an economy. We need to demand that governments act in the best interests of everyone not just the narrow interests of those who would accumulate wealth at any cost.

If we are to benefit from what we have learnt from this crisis governments must also be made to show more respect for science and take into account expert opinion when making decisions that have long term effects for people and the environment they depend on.