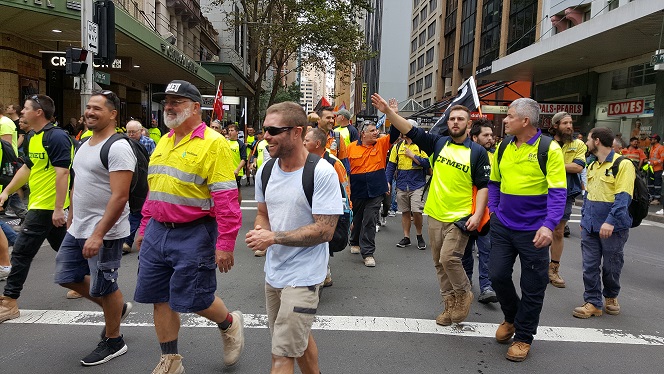 On Thursday May 1st last year, 20,000 construction workers went on strike. Nearly 10,000 marched through Sydney’s streets, pouring in by train from across the western, southern and northern suburbs. It didn’t come from thin air – there was long lead-up.

“In some places around the world, workers are killed for marching on May 1st. It’s not a family fun day. It’s the day we celebrate our unity and strength as workers.” So argued a construction worker each year at the NSW CFMEU Construction Division Committee of Management and at delegates’ meetings.

Motions for industrial action he moved or seconded had been passed at Unions NSW. Each time support beyond his own union evaporated.

Necessary compromises or begging for scraps

Let’s call the worker “X”. Not because he’s afraid to be known. His father and uncle were rank and file leaders of the Builders Labourers Federation, who helped wrest it from the gangster rule of the 1950s.

X is not driven by ego or individualism. He could have been a union official any time. He prefers to stay “with the blokes on the site”.

There are many effective and courageous union officials.

But in too many unions, workers see officials jockeying for power, putting buildings and assets above struggle, caving in to laws instead of defying them, installing officials with no experience at work or in struggle, relying on parliament instead of on collective unity, on unholy alliances and media stunts instead of mass action. And, of course, there are some big egos, ever willing to proclaim their supposed militancy and the work that others have done as their own.

These negative traits flourish because unions are part of capitalism. At their best they seek a bigger share of the capitalist pie. Unions, even militant ones, don’t challenge capitalism itself. The transition from necessary compromise imposed by relative strengths to begging for scraps doesn’t happen overnight. But over time, exactly that has happened in most unions in this country.

X knows where he stands. He puts others before himself in his effort to build militant solidarity.

And he stands against a system of exploitation now surviving only on giant, unsustainable debt as Covid-19 impacts on us all. Who received the billions upon billions of bailouts? Who is left with nothing? And who will pay the bill at the end of it all?

“That’s what I know about him!”

Like CFMMEU Construction Division officials, X refused summonses to the Australian Building and Construction Commission (ABCC). If or when the screws are tightened, that would see him and others automatically gaoled for six months. At law, there is no other sanction available for such refusal.

For years, whenever ABCC inspectors arrived at a certain company’s sites, they asked, “Has X been here? What was he saying or doing?”

One worker braved questions about X. “You see this scar? X made sure I was looked after, when that happened. THAT’S what I know about him!”

And ABCC officials demanded answers from a manager, “Who’s that in this photograph?”

There were two people on a building site. One – built exactly like X, wore a T-shirt, “Fuck the ABCC” emblazoned across its back.

“I don’t know. I can only see his back,” replied the manager.

“No, not X,” the inquisitor snarled as if the manager was an idiot to pretend otherwise. The inspector pointed at the other figure in the photograph. “Who’s THAT?” Of course, it was the manager himself.

After all, construction workers need to work to pay the bills and managers want to ensure the profits of their corporate bosses. That was capitalism in its recent super-boom times, when labour shortages gave workers stronger bargaining power.

Perhaps in response to that threat, in 2018 the company prosecuted eight workers for refusing to remove Eureka flags from cranes. X’s name was first on the list when it was lodged with UnFair Work Australia.

All hell broke loose. Eureka flags appeared on construction sites round the country. Crew after crew published photos in defiance, the silver stars on blue, shining in dingy concrete bunkers matched by the workers’ jubilant smiles that said, “Come on! Take us all on! This is our flag!”

The Queensland branch of the Australian Education Union issued Eureka stickers to its members and refused orders from the government to withdraw them.

In mid-May, 120,000 workers on Melbourne streets put the nail in the dispute’s coffin. They had many grievances, including the flag ban.

The ruling class wanted Eureka’s message taken out of this fiery mix. By early June, UnFair Work Australia, ruled in the workers’ favour.

Deep within the peoples’ ranks 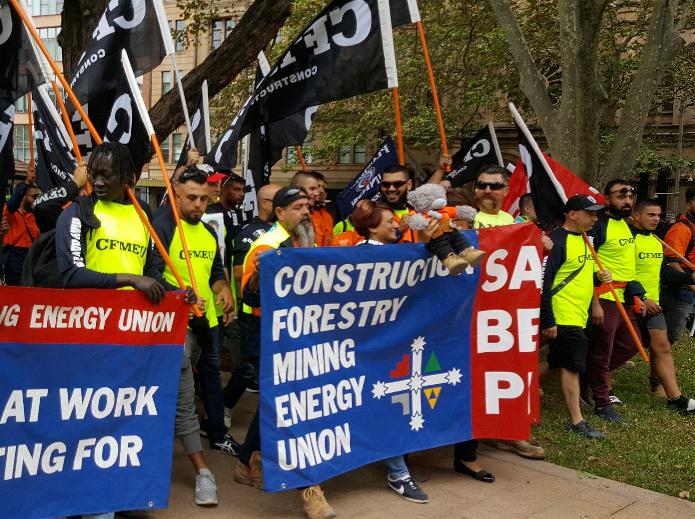 In 2019, a month before May Day, a young apprentice Christopher Cassaniti was killed when nine storeys of steel scaffolding collapsed on him, four days after his 18th birthday. Another worker, Khaled Wehbeh, was badly injured.

Grief and anger were fresh. May Day for Sydney construction workers would be on May 1st. It would be a strike – the four hours they were docked if they struck for five minutes.

CFMMEU Construction Division was ready to go it alone. The ETU and Plumbers Union soon joined forces, all taking to the streets on this international day of the working class. One MUA worksite also stopped work and marched. Large groups of union officials and some others joined in their lunch breaks.

As midday approached, Belmore Park near Central Station filled, large groups shouting and laughing, greeting old mates from past jobs. Some took proffered political leaflets and newspapers, but many were simply exercising the exhilarating freedom of solidarity.

It was anything but a picnic of lefties or a family fun day. They were everyday people, organised and committed to collective action.

Nothing can change the truth. Working class leaders arise in struggle. We remember it this May Day and it makes us stronger.

This article was originally published on the Vanguard website