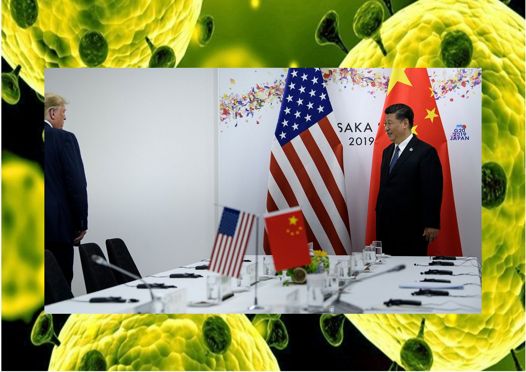 This article was first published at Open Forum

The Trump administration has blamed China, and now the World Health Organisation (WHO), for the pandemic, seeking to distract blame from the neoliberal model of capitalism adopted in much of the Western world since the 1980s. This is also a convenient excuse for the US to attack a rising power that is starting to encroach on its influence and control.

Ultimately, the Trump administration is using the Coronavirus to drive a wedge between the US’s allies and China. Australia is a good example of this, uncomfortably caught between its largest trading partner (China) and its security partner and long-term ally (the US). For the moment, Australia appears to be towing the US’s line. In other words, the Coronavirus crisis has not led to international co-operation, but has rather been used as a pretext to intensify existing rivalries and policies of territorial division.

If it is true that China is partly responsible for the spread of the virus, it is equally true that the US and other governments were aware of the coming pandemic as far back as November 2019, according to intelligence reports. And China told the WHO of an unknown severe influenza on 31st December 2019.

In the West, anti-Chinese propaganda has been relentless, implying that China is accountable for the health crisis. Governments are generally only responsible for the wellbeing of their own citizens, as witnessed in the European Union. The lack of intervention by the EU in Italy, an EU member state, for example, prompted a formal apology from Brussels.

Furthermore, scientists have linked the pandemic to bats and human encroachment into wilderness, rather than Chinese malicious intent or negligence. But governments don’t seem to be listening.

Why might that be? Trump is also using China, and now the WHO, to distract attention from his own dismal failure to manage the crisis and from the destruction wrought by the bi-partisan approach to healthcare in the US. Hedging his bets as to whether there is or is not a crisis, Trump has supported ‘anti-lockdown’ protesters, with some right-wing supporters reportedly carrying semi-automatic weapons.

Neoliberalism and its failure to provide for the population in times of need should be the big story here. Neoliberal policies have undermined essential social and public services in many countries, including some of the worst hit by the current crisis, the United States and Britain where the death toll continues to mount. John Pilger’s latest documentary, The Dirty War on the NHS has shown that Britain’s’ health system has fast been converted into a free market model, inspired by America’s disastrous health insurance system. And the UK has paid the price.

Historically, these moves to cut back public health funding and to promote private health funds is traceable to the ‘Washington Consensus’ – when neoliberalism was being adopted by Margaret Thatcher in Britain, Ronald Reagan in the US, and the late Bob Hawke and Keating governments in Australia in the late twentieth century.

Although Australia still retains Medicare, private health insurance continues to be subsidised by taxpayers, just as government subsidies keep private health cover alive. This is a danger to us all. While Australia has fared better than the US or UK, this is likely the result of geography and quarantine measures, rather than its health system.

In the US, the pharmaceutical companies and private health insurance companies, supported by both Democratic party nominee Joe Biden, and Donald Trump demonstrate the lengths governments will go to, to protect corporate interests including ignoring their own intelligence reports. The neoliberal purpose is not finding vaccines, but rather to keep selling unnecessary products to uninformed and irrational consumers.

Like the previous economic crisis in 2007-08, those who have been hit the hardest are workers. In Australia, particularly casual workers. There are approximately 22 million people currently unemployed in the centre of the ‘Washington Consensus’, the highest record ever.

While the unemployment figures in Australia do not come close to those of the US, it remains to be seen whether the stimulus packages will help workers keep their jobs, or whether they will simply subsidise their employers. Such insecure employment, without hard-fought sick leave or other entitlements is not helping either. These employment contracts are a product of the neoliberal de-regulation of the economy and the waking death of the union movement.

The doubling of unemployment benefits also exposes the inadequacy of the unemployment safety net prior to the crisis, another reflection of neoliberal remodelling.

This troubled public health care system and inadequate social policies reflect the outcome of more than a decade of de-funding of those areas – leaving a system that is ill-equipped to deal with a social-economic and health shock. Essentially, the Coronavirus has exposed the realities of the current world system- how health services run for profit mean supply of essential products like ventilators and masks (and even toilet paper) can be jeopardised, and how we cannot expect pro-employer policies to provide for workers.

The COVID-19 pandemic also demonstrates the fragility of the world economy and the lack of international co-operation, which is undermined by US-led neoliberalism. Germany and France, among the strongest economies of the EU, have joined the US in criticising the WHO for its handling of the pandemic and, like Australia, are looking to return to ‘business as usual’ despite the warnings of the WHO.

Will a new kind of internationalism triumph over profits and corporate bailouts? Or will the wealthy and the corporate sector continue to be subsidised by taxpayers? Worst case scenario, nothing changes, and governments will use the crisis to push through more radical-statist policies that fund the privileged, i.e. ‘disaster capitalism’

Just ‘how’ to make the world economy healthy again will depend on what kind of society we want, and is the big question facing the international community. If the Australian government can pay for a doubling of the unemployment benefit, free childcare, and the ‘merging’ of the public and private health systems, should it wind these initiatives back?

Many Western governments, including Australia, would prefer to take these crisis measures than to fund public services properly all of the time. It does seem that workers will be left to pay the bills, meaning that Keynesian-style policies are only temporary measures to deal with a global crisis of capitalism.

Just how long the road to recovery takes will depend on the kind of economic system in place and what policies governments pursue. But will a return to normality lead to better trade and cooperation? Or will it continue to fuel restlessness, inequality, conflict, right-wing populism and even authoritarianism, which is by no means incompatible with neoliberalism.

Despite the conventional view that Trump is a threat to the globalist system of neoliberalism, his tactic is simply to re-direct US manufacturing away from China as a way of curbing its increasing power. Trump’s alternative to Chinese manufacturing and cheap labour (supported by the Democrats and most of the Western world) is trade wars that attempt to replace Chinese manufacturing with other low-cost economic zones. In the World Economic Forum held in Davos last January, Trump was cheered on just as his predecessors were.

Finally, we must ask – what is the real virus here? Is it Coronavirus or our reliance on unnecessary wants brought to us by cheap labour in efficient time, and always wanting more?

The response to Coronavirus demonstrates that an alternative to the neoliberal model of capitalism is possible. In all parts of the world, there is evidence of communities doing things differently and thinking as a collective. So, there is a lot to be positive about amid so much uncertainty and great power competition and rivalry. Progressives in the US, UK and around the world have shown that they cannot lead the charge for an alternative. Do we need to think outside the box even further- beyond existing political paradigms?

According to the Bulletin of the Atomic Scientists, the Doomsday Clock is now set to 100 seconds to midnight, largely due to manmade causes i.e. nuclear weapons, disruptive technologies and climate change which is linked to the rise of infectious diseases.