Tuesday 19 November on the steps of South Australian Parliament House Stephen Darley, Convenor of IPAN(SA) spoke to a protest rally against the US conspired coups in Bolivia, South and Central America. 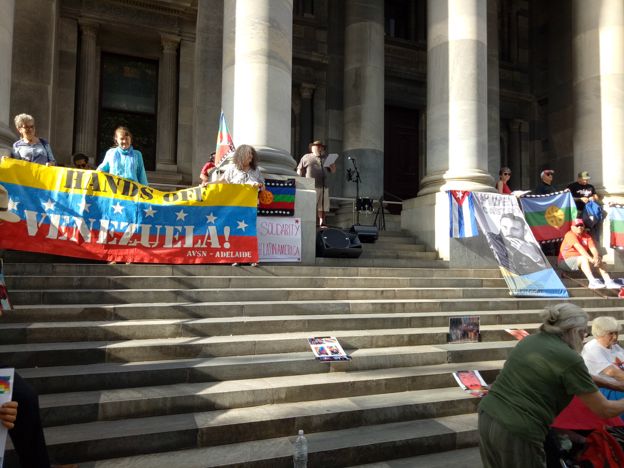 “I immediately assume the presidency of the State and I undertake to take all necessary measures to pacify the country,” said Áñez in Bolivia.  The senator proclaimed herself president only with a minimum presence of deputies, all from the opposition.  She also declared “The Bible returns to the Palace,”  in an attack against indigenous communities. She made this clear: “I dream of a Bolivia free of satanic indigenous rites, the city is not for the Indians who should stay in the highlands or the Chaco”.

It is important to recall that Bolivia has suffered a series of coups, often conducted by the military and the oligarchy on behalf of transnational mining companies. Initially, these were tin firms, but tin is no longer the main target in Bolivia. The main target is its massive deposits of lithium, crucial for the electric car.

Over the past 13 years, Morales has tried to build a different relationship between his country and its resources. He has not wanted the resources to benefit the transnational mining firms, but rather to benefit his own population. Part of that promise was met as Bolivia’s poverty rate has declined, and Bolivia’s population was able to improve its social indicators. Nationalization of resources combined with the use of its income to fund social development has played a role.

In 2014, even the Financial Times agreed that Morales’ strategy was not entirely inappropriate. “Proof of the success of Morales’s economic model is that since coming to power he has tripled the size of the economy while ramping up record foreign reserves.”

Tesla (United States) and Pure Energy Minerals (Canada) both showed great interest in having a direct stake in Bolivian lithium. But they could not make a deal that would take into consideration the parameters set by the Morales government. Morales himself was a direct impediment to the takeover of the lithium fields by the non-Chinese transnational firms. He had to go. After the coup, Tesla’s stock rose astronomically.

The coup has of course been orchestrated in the US, through it’s compliant puppets in the OAS, the military and police, the opposition and the rich of Bolivia. An n official US communication said “The resignation yesterday of Bolivian President Evo Morales is a significant moment for democracy in the Western Hemisphere,” it read, claiming the events constituted the “preservation of democracy.” It also sent a clear threat that more regime-change operations were to come, and they already knew who the targets were – Trump Threatened Venezuela And Nicaragua. The U.S. has overthrown over 50 governments since 1945, many of them in the region it considers its “backyard.”

And as we know this goes back to 1823, and the so-called Monroe doctrine – shortly after the people across the content threw off the rusting shackles of Spanish imperialism, the US presented new money-forged ones. Not old-style formal imperialism, but what we now call neo-imperialism – political compliance and economic subservience.
Also in reaction to what happened in Bolivia, a number of South and Central American countries leaders clearly called it a coup. Meanwhile, guess who said in response “the continent was feeling “the democratic hurricane in Latin America” –  yes, would-be coup leader in Venezuela Juan Guaido. And self-declared President Anez paid him back by recognizing him as President of Venezuela!

The US (and Australian) mass media predictably falsified what had happened – CBS News, for example, claimed that Morales was “resigning” due to “election fraud and protests.” The New York Times asserted he “stepped down” amid “weeks of mass protests by an infuriated population that accused him of undermining democracy.”  No mention of the army pistols held to his head, the police mutiny, the threats against his and other ministers’ families.
President-unelected Anez said Morales may be prosecuted for electoral fraud. In response, Evo Morales declared “Our crime or sin is being anti-imperialist.” “If I have committed a crime; it’s being Indigenous. If the Vice President has committed a crime; it’s implementing social programs for the humble & poorest sectors seeking social justice.”
I’m afraid however I must be critical of the Morales government for a moment – not about seeking asylum in Mexico, a clear attempt to smear Morales as a coward. No doubt they would have preferred to have killed him in Bolivia. But no, the unfortunately clear difference with Venezuela was that Chavez armed the people on a large scale and made a good start on reforming the military. You cannot rely on former ruling elites and American imperialists to restrain themselves – they want their privileges, resources and power back, and will go to any lengths to get them.

Members of the Bolivian indigenous movement have shown this – Armed MAS supporters took over the highway heading north from La Paz in a town called Alto Beni. The day after the coup, Bolivians spontaneously came to the streets chanting “Now it’s time for civil war” and “Camacho, Mesa, we want your heads”—referring to the ultra-right-wing leaders of the coup. They set fire to a police station and burned the police in effigy in the streets, causing the police to retreat. They blocked highways and roads, closing schools and businesses. They rejected the racism and misogyny showed by the coupists against the wiphala (an indigenous flag) and “the women who wear the pollera,” in reference to the Andean traditional skirt worn by Cholas (Aymara women). They suffer not only coup violence but also the structural racism of the Bolivian bourgeoisie.

They built assemblies to discuss the next steps and self-defense. Indeed, the assembly concluded that it was necessary to “form self-defense committees, blockades, permanent and forceful mobilization.” As one protester said, “The police will no longer be in El Alto. We will take care of security within the community.”

But in Venezuela, in the defeat of the attempted coup against Chavez and the more recent one against Maduro, they showed the way. Of course, reforming the military is easier said than done –  so many officers across South and Central America have been trained in the so-called School of the Americas – trained in coup-making insurrection, in torture, in the suppression of protest and in reactionary propaganda. This includes the military coup-makers in Bolivia – the head of their military Kaliman and other military leaders.

But both arming the people and reforming the military are essential – already protesters have been killed by the military in Cochabamba and elsewhere, and no doubt there will be more to come. The people may well end up being victorious – but it will be bloody. The coup leaders in Bolivia according to Evo Morales are now “preparing for a state of siege”. The self-appointed government of Bolivia issued a decree last Saturday exempting Armed Forces and National Police from criminal responsibility when committing acts of repression against protesters who have taken to the streets to reject the coup d’etat. The decree also states that security forces may use firearms to suppress protests.

Massive protests in solidarity with the Bolivian people and against the unconstitutional interruption of Morales’ mandate were carried out in Argentina, Cuba, Brazil, Venezuela and Panama.  I haven’t seen that on the Australian media, have you?

Nor have we seen the mass protests in Chile – whilst the much smaller and diminishing riots in Hong-Kong get lavish coverage.  Chile: Protests Continue For the 28th Day in a Row, TeleSur said 5 days ago. Chile: Repression Reaches Levels Similar to Pinochet Era – is another headline in TeleSur. Over the last month, at least 5,629 people have been arrested and 2,009 were injured during the protests. After completing an “emergency mission” in Chile, European Parliament Members Miguel Urban and Idoia Villanueva reported a fortnight ago that Chile suffers repression levels similar to those seen in the last three years of Augusto Pinochet’s dictatorship (1973-1990). The police have been heavily criticized for their handling of the demonstrations, with medical experts saying that more than 200 protesters have suffered eye injuries or been blinded by tear gas canisters and rubber bullets. That greatly resonates with me from my country of origin, Ireland – where similar injuries were caused by the British Army and Police.

Social unrest has increased in magnitude as the Chileans questioned “30 years” of neoliberal policies, which have implied a systematic withdrawal of economic and social rights for millions of people. This has included a massive General Strike in Chile which Demands a Constituent Assembly and replacement of the Pinochet-era reactionary Constitution – still in place.

Aluta Continua!  (The Struggle Continues).There will be setbacks and defeats, but we cannot submit to the greed, arrogance, racism and oppression of imperialism. “We will come back,” Evo Morales recently assured supporters, quoting the 18th-century indigenous resistance leader, “and we will be millions as Tupac  said.”