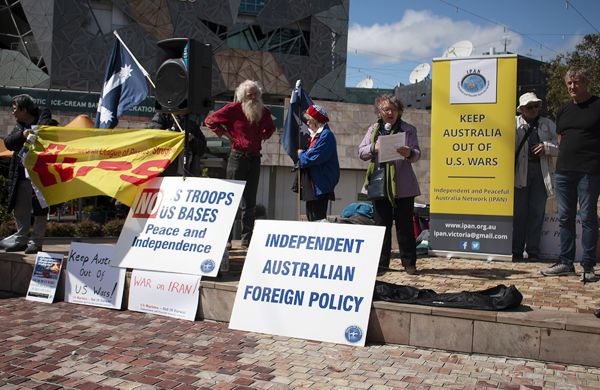 The Independent and Peaceful Australia Network welcomes you all today to this rally on the International Day of Peace.

We acknowledge that we’re on the stolen lands of the First Nations people, the Wurundjeri people who have never ceded their sovereignty.  We pay our respects to First Nations People’s elders, past, present and emerging, and their culture.   We support the struggles for self-determination and sovereignty.

This year’s United Nation’s International Day of Peace theme is “Climate Action for Peace”.  This rally is part of the world wide actions against the two major threats facing the world today – wars of aggression and climate change.

How do we here in Australia contribute to global peace and justice and be part of the world wide people’s movement to put an end to imperialist wars of aggression?

Today, Australia is deeply enmeshed in U.S. war machine and its military-industrial corporations.  Our 2 main political parties are subservient to U.S. foreign policies and act like puppets of the U.S.   Successive Australian governments obediently answer every call made by the U.S. to support its global military agendas, taking orders from the world’s most ruthless aggressor and war monger that tramples on lives and human rights of people across the world and sovereignties of countries.

This is no more obvious than Morrison’s swooning performance before Trump.  As we hold this rally Morrison is taking his orders from U.S. President.  The U.S. lap dog Morrison has committed Australia in his own words to “100 years” of more subservience and servitude to the U.S. and its imperialist wars.

He has committed Australia’s subservience even more deeply to the US (some would call it brown nosing more deeply). This means even more U.S. military and intelligence bases in Australia and more US marines. It means hosting US mid-range nuclear missiles and new naval ports and facilities for the giant US nuclear war ships and air force fighting carriers.

It means committing Australian forces to U.S. wars without even the formality of debate in Parliament.

Australia is being turned into a major regional US launching pad from which the U.S. can launch its wars against the people of Asia-Pacific and the Indian Ocean region.  And not only against the people of our region.  The U.S. intelligence and military bases Pine Gap near Alice Springs and North-West Cape in north west Australia are used for waging its wars in the Middle East.

The only threat to Australia’s peace and security is the US-Australia military alliance – making ourselves a target, if war between U.S. and China breaks out.

Australia has been accurately described as the 51st state of the US or its deputy sheriff.  In past 60 years successive Australian governments have unquestioningly supported and backed every US war, invasions, political and military interferences and regime changes in other countries.  Iraq, Syria, Libya and now Iran.  Australia is assisting the US in military operations against the people in the Philippines.

In the UN Australia rubber stamps every US foreign policy to legitimise US manoeuvres for regime changes, invasions and wars of aggression.

More than ever, our society is being militarised.  Australia’s defence budget of $200 billion over next 4-5 years is primarily to prop up our integration and interoperability with the US global military agendas and policies, not for sovereign self-defence.  That’s billions of dollars of people’s taxes being taken away from public health, education, from increasing the NewStart allowance and disability payments to simply fund US wars and the world’s biggest war corporations.  Our schools, our universities and manufacturing industries are more than ever being integrated into US military-industrial complex. The glorification and acceptance of imperialist wars becomes main stream.

Australian people’s contribution to ending imperialist wars is to build a broad people’s movement that unites many strands of peace, anti-war and anti-imperialist struggles to end US-Australia military alliance, remove US bases and troops and promote an independent and peaceful foreign policy, and independence from all big powers.

This will be our contribution to global peace and justice.