What is the logic behind this statement? 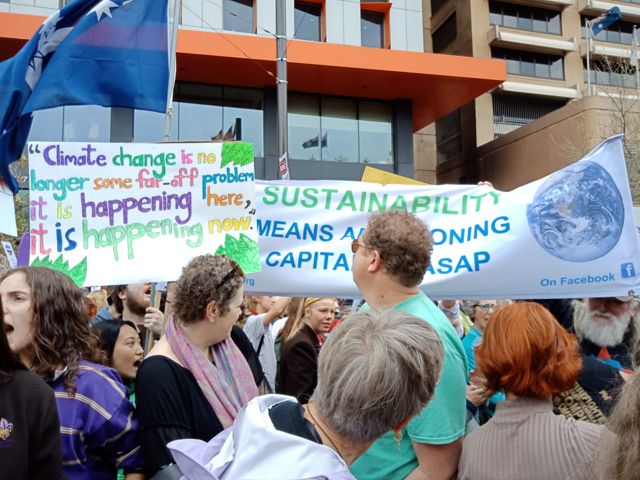 Capitalism is an economic system whose sole basis for existence is to make a profit for those who invest in the process of production. Goods are produced and sold to purchasers who either require those products or have been convinced that they should have them. They are sold at such a price that will return a profit to the producer. If these goods were to be sold at less than the cost of production, the manufacturer would no longer continue to produce these products. Capitalism is not a social service. In order to make products, materials are required as inputs. The materials ultimately come from nature.

A characteristic of capitalism is that there is competition between capitalists and this necessitates that the rate of profit must continually increase if the capitalist is to survive. We often read in the financial literature that such and such a company had growth of only 1% or 3% in the last year, to convey an expression of disappointment, because the investors or shareholders want more profit.

There are many ways to increase profit. One is to create other products whether they are necessary or not. Another is to build obsolescence into the product so consumers must constantly upgrade to a new model (eg mobile phones). Yet another is to create “use once” objects. Or make products that do not last, such as flimsy plastic children’s toys.

In any case, the capitalists develop new products at as rapid a rate as possible so that ever increasing profits can be made. There is no regulation or rather planning about how fast to develop products, it is left up to the “market”.

In this way the capitalist mode of production has an insatiable appetite for material inputs. It exploits nature like there is no tomorrow – quite literally!

Simple mathematics shows that such growth is exponential. For example, let us say that capitalism overall, wants to achieve a modest growth of 2% per annum. Let us also assume that capitalism has been around for about 250 years.

The growth over this period would be (1+0.02)^250. That is, production and materials used have increased by a factor of 140 times in this scenario. If the growth rate is assumed to be somewhat higher at 3% per annum, the figure for the increase in use of materials sky-rockets to 1600 times. This little thought experiment is an oversimplification, but it illustrates the point.

Since the materials are not replenished in any significant way under capitalism, the use of materials continues to go up and up.

The problem is that the materials provided by nature are finite and so they will be eventually depleted.

Of course the other consequence of this, is environmental imbalance (climate change, pollution, destruction of forests, land degradation, species extinction, human displacement and the list goes on). The planet will be irreversibly damaged well before all of its resources have been depleted.

This is why capitalism is incompatible with sustainability.

Capitalism is an exploitative economic system. A different, non-exploitative system is required if our unique and beautiful planet is to survive as we know it. This model must incorporate a high degree of planning instead of the failed practice of relying on “market forces”. Here is just one example – under this model, infrastructure can be put in place which enables the highest possible rates of collection, recycling, recovery and reuse of materials. Research into technology for recovering used materials will take place. Product redesign would play an important role. Once the rate of material recovery is known, this will determine the rate at which products are made, such that material use will be sustainable and meet the needs of future generations. There are many other ideas that can be implemented in such an economic system that cannot be considered under capitalism. Capitalism is incapable of regulating itself in this manner and will continue unfettered to consume every resource on the planet if allowed to.

The constraint we now face is time. The rate at which the capitalist mode of production is causing irreversible environmental damage to our planet means that we as a species must switch from capitalism to a non-exploitative economic system immediately and then start working in earnest to reverse the damage.

Capitalism has served its purpose – and it must be acknowledged that it has been a vehicle which has allowed immense progress to be made in many areas of human endeavour. But this has come at a high price. It is now past its use-by date.  It is now a dangerous hindrance which we and the planet cannot afford.