Speech for the International Day of Peace 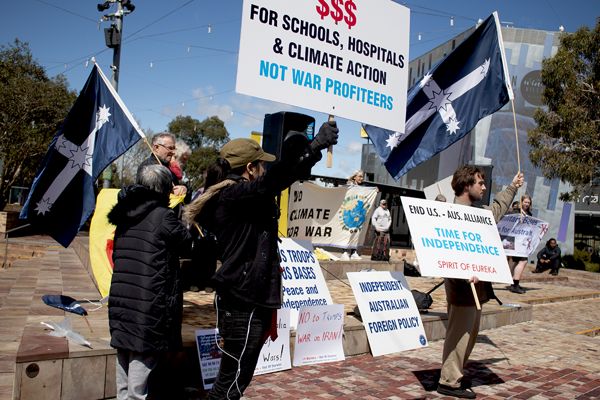 Greetings, friends and comrades. Thank you all for joining me here today. I would like to begin by acknowledging the traditional owners of this land, the Wurundjeri people of the Kulin Nation and to pay respect to its elders, both past and present.

As I’m sure you are all aware, today is the International Day of Peace as sanctioned by the United Nations. It is a day in which the peoples of all nations come together in the celebration of peace and the rejection of war and conflict. However, sadly, today is far from a peaceful day, as countless conflicts continue to rage on around the world right now as we speak.

But why is this? Well, it is certainly not the desire of average working people to perpetuate war. Indeed, I think it is fair to say that the vast majority of us find the idea of war to be sickening and worthy of the utmost criticism and objection. So why, then, does war remain so common in the modern world?

Our current economic system prioritises the generation of profit above all else, and it is an undeniable fact that war is an excellent money maker. In 2017, the world’s top 100 defence contractors sold $398 billion worth of arms to various nations around the globe. This includes Lockheed Martin, the largest defence contractor in the world, which has for years provided military arms to some of the world’s most brutal dictatorships.

Lockheed Martin currently provides arms to Saudi Arabia which has been taking part in a genocide of the people of Yemen. Recently a Lockheed Martin made bomb was dropped by the Saudis on a school bus in Yemen resulting in the deaths of 51 people, 40 of which were children. In 2018 a Saudi-lead airstrike hit a wedding in Yemen in which more than 20 civilians were killed. In spite of these tragedies, corporations like Lockheed Martin and Boeing, aided by corporations such as Exxon Mobil, BP, Shell and Chevron, continue to fund the murder of countless innocent civilians, from Yemen to the Phillipines and from Afghanistan to Palestine, all for the sake of profit.

It is clear, then, that our profit-driven economic system provides more than sufficient motivation for these corporations and governments to continue the perpetuation of war indefinitely.

However, aside from the staggering cost of human life, there exists another terrible side effect of our profit orientated system. In order to sustain such a gargantuan military industrial complex, an equally large amount of fuel is required to keep its war machines running which in turn results in the production of ludicrously high amounts of carbon emissions. In fact just 100 corporations, many with links to the military industrial complex, are responsible for the production of 71% of all carbon emissions. Among this list there are many familiar names, including Boeing, Shell, Exxon Mobil and BP just to name a few.

Not only does our profit-driven economic system lead to the continuation of countless wars resulting in the deaths of thousands if not millions of people each year, but it is largely responsible for the current climate crisis. With this endless cycle of indefinite war and a need to fuel it, it is easy to see how such a relationship will continue to accelerate climate change much further than it already has, continuing to snowball until irreparable damage has been inflicted on the environment.

What is the solution to these problems? How do we end this constant cycle of war and environmental destruction? The answer is to abandon our current profit-oriented economic system and replace it with one the prioritises human need above all else, not the creation of profit. Only then can we strive to make every day like today, a day of international peace.