by Danny O’Reilly  (This article was originally published by Vanguard on January 10, 2019.) 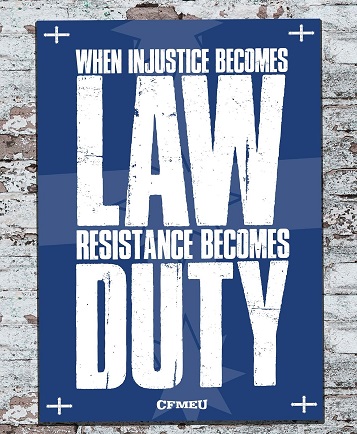 We are told that the law is impartial. That all stand equally before it, and that it arbitrates fairly and with justice. But it doesn’t. Our lived experiences show us that’s a lie.

It was the French poet and writer Anatole France who wrote the well-known words, “In its majestic equality, the law forbids rich and poor alike to sleep under bridges, beg in the streets and steal loaves of bread.” There is a fundamental truth in this quote that demonstrates the real nature of the law as we know it. In a class society like capitalism, the law exists for the benefit of the rich and ruling class while it punishes the poor and working classes all the while holding high the banner of “equality”.

Arising from this contradiction between the self-avowed ‘equality’ and ‘impartiality’ of the law and the reality of the inherent inequality of a class society in which that law is applied, there exists a concept of ‘injustice within the law’.

In 1937, ‘Doc’ H.V Evatt, then High Court judge who later went on to become leader of the ALP, penned the book Injustice within the Law detailing the case of the Dorsetshire labourers, also known as the Tolpuddle Martyrs.

In 1833, six agricultural labourers in the village of Tolpuddle in the county of Dorset in south-east England founded what was essentially a trade union to fight against the lowering of their wages. In doing so, the labourers swore an oath of allegiance to each other and their union. The following year they were sentenced to seven years penal transport as convicts to Australia.

The legal pretext for their sentencing was swearing a secret oath which was a violation of the obscure Unlawful Oaths Act 1791. Of course, their real “crime” was organising a union to fight for their interests, despite trade unions having technically been made legal ten years earlier.

A great popular movement arose in England in defense of the Tolpuddle Martyrs and against the injustice that had been done to them. A petition was circulated which received over 800,000 signatures and a mass demonstration was organised. The popular pressure forced the English government to pardon the labourers in 1836, just two years into their sentence. The case of the Tolpuddle Martyrs became a textbook example of ‘injustice within the law’, of how the law is twisted and manipulated to serve the interests of the ruling class and undermine the democratic rights of the people.

Examples of these ‘injustices within the law’ are plentiful. But they become increasingly obvious in times of economic and political crisis for the ruling class. In the Great Depression of the 1930s in Australia and elsewhere cases proliferated. The real “crime” of the workers and poor was organising and protesting against their starvation, unemployment, and hardship. The crimes they were technically charged with were offensive behaviour, hindering police, obstruction, causing a public nuisance etc. Repressive legislation was passed to hinder the activities of trade unions, and unsuccessful moves were made to outlaw the Communist Party, a staunch fighter for the interests of the workers and unemployed.

Today, at an increasing rate legislation is being passed in Australia that curtails our democratic rights. Some of these include laws that punish journalists and whistle-blowers who try to inform the people of what our government is really up to, laws that remove our rights to privacy in the name of “keeping us safe from terrorism”, and laws that prevent us from holding effective protests and making our voices heard as equal citizens of the country. As the economic crisis of capitalism drags on, and in time worsens, as social inequality deepens and the life of ordinary workers and people gets harder, all of these laws are waiting and available to be used against us to supress our ability to resist and fight back.

Australia already has some of the most draconian and repressive anti-union laws of any advanced economy in the world. But the most militant union and section of workers, the CFMEU and its members, are increasingly the subject of ‘injustice within the law’. The union’s officials are charged with trespassing, blackmail, and now even criminal cartel behaviour. Of course, their real “crime” in the eyes of the ruling class is effective union organising which infringes on the bosses’ profits.

To try and curb the example set by the construction union to the rest of the working class, the ruling class established a political attack dog in the Australian Building and Construction Commission (ABCC), a government body designed specifically to target the CFMEU and its members that dare take a stand for the rights of workers.

More recently, the ABCC has used its compulsive powers to force employers to hand over the personal details of construction workers around the country who attended ‘Change The Rules’ rallies late last year. Workers can now be pursued for taking “illegal industrial action”, which for construction workers can mean an individual fine of up to $42,000, more than three times than any other worker under the Fair Work Act. Equality before the law? Not if you’re a construction worker!

Obviously, all this is another good example of ‘injustice within the law’. Workers are threatened and fined for the crime of illegally striking, but their real “crime” is fighting for their democratic rights, for pay rises to keep their heads above the rising tide of the cost of living, and for daring to challenge the government’s repressive industrial laws that serve the profit margins of the big business ruling class so well.

The hypocrisy is rank! Politicians vote to give themselves massive pay rises year after year, bankers receive huge salaries and bonuses for exorbitantly charging customers (and dead people!), while the workers face almost insurmountable legal obstacles to even have their pay keep up with the cost of living, and in many cases to even be paid the measly legal minimum!

The ACTU’s campaign to ‘Change The Rules’ is a noble attempt to try alleviate the worst aspects of all this, and deserves our support. It’s immensely important to defend the democratic rights that workers have been able to win over hundreds of years of struggle and to fight to extend those rights to give the working class the best chance to organise and improve its conditions in the here and now.

But we should not fall into the trap of thinking that if the ‘Change The Rules’ campaign is able to win all of its demands that would somehow make the law and its courts and commissions ‘fair’ or ‘just’ or ‘independent’ or bring ‘equality’ between workers and employers. The nature of the law under capitalism would not change one iota. Because, under capitalism there can never be equality between unequals, between rich and poor, between oppressed and oppressor, between slave master and slave, between capital and labour.

There’s a well known saying that goes “When injustice becomes law, resistance becomes duty.” When we are clear on the nature of the law and come to understand that it really serves the interests of the ruling class against the workers and common people, then from the stand point of the working class, it becomes clear that the law is always unjust and that resistance is always our duty.

And we can rest assured that as sure as night follows day, as the ruling class attacks on the living standards of the workers deepens and the repression of the people’s democratic rights increases, so will the people’s desire for struggle and resistance, like it has so many times before. So, the only question left to ask the workers of Australia and those who claim to represent them is, are you prepared to do your duty?