The following is Spirit of Eureka’s report back from the recently held 2019 Independent and Peaceful Australia Network (IPAN) National Conference in Darwin 2-4 August. Spirit of Eureka is a founding member and active part of IPAN. 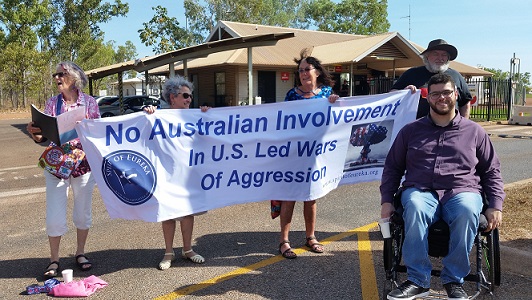 A broad and united movement against war and for independence continues to grow in Australia as US imperialism increasingly tightens its grip over the two subservient major parliamentary parties, to enmesh Australia more deeply with US wars of aggression.

The 2019 IPAN Conference in Darwin 2-4 August, re-asserted calls for a peaceful and independent Australian foreign policy, the removal US military bases and troops and building peace and friendship with people and countries in our region.

The IPAN conference in Darwin helped to build support and solidarity amongst local people in an environment generally supportive of US troop placement there, and recognised by those locals attending.

Several international guest speakers from Asia-Pacific and Oceania participated, sharing experiences of their countries hosting US bases and struggles for independence from US and other big powers.

The Conference called for the removal of US bases and marines from Australia, an end to the US-Australia Alliance and an independent and peaceful foreign policy.

Speakers urged that the billions of dollars of public funds spent on US wars of aggression instead be directed to social and community needs and services for the people. To highlight this, IPAN will be launching a people’s enquiry into the economic and social costs of supporting US wars of aggression and the US “Alliance” to the people, and will be seeking wide-ranging verbal and written submissions. 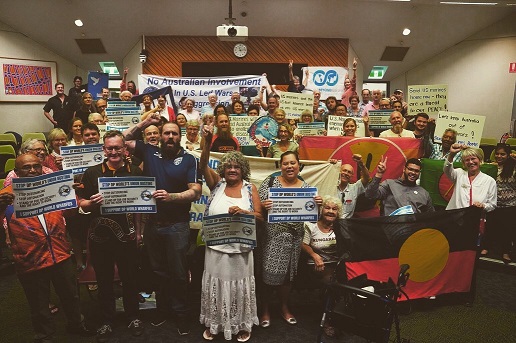 A number of contributions linked the struggle for an independent foreign policy to broader concerns amongst Australian people about the role of global capital and multinational corporations in Australia, pointing to one of the key concerns of Spirit of Eureka.

The Conference passed several resolutions, including a solidarity message to Maritime Union of Australia DP World wharfies fighting to protect their wages, conditions and job security; solidarity with the people of West Papua fighting for justice and independence from Indonesia; against involvement with US war plans against Iran; in defence of Julian Assange; and against the export of arms (Resolutions at the end of the report)

On Saturday afternoon the Conference held a lively protest outside Robertson Barracks where 2,500 US marines are housed, calling on US marines to go back home to America. In the months before the conference, organisers made attempts to arrange a meeting with the US base commander outside Robertson Barracks to present him/her with an old boot mounted on a plaque – to “give ’em the boot”. Unsurprisingly the request fell on deaf ears. 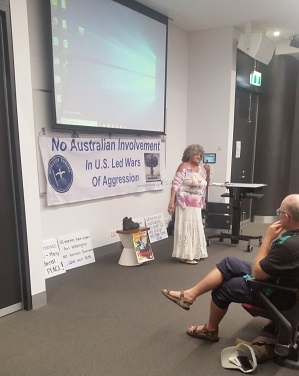 One of the many highlights of the Conference was the participation and strong contributions made by the Larrakia First People, the traditional custodians of the country around Darwin, NT. We learned about the rich culture and history of Larrakia First People’s struggles for justice and sovereignty. Neither the Australian governments nor the US ever sought permission from the Larrakia people to base US marines on their country. Many Conference participants were inspired and moved by the wisdom and generosity of the Larrakia people extended to us.

While anti-war activists in Australia were meeting in Darwin protesting against US bases and the two major parliamentary parties’ subservience to the US and calling for an independent foreign policy, US Secretary of State Mike Pompeo was in Sydney at the high level annual AUSMIN (Australian-US Ministerial) meeting demanding that Australia not only back the US “battle with China”, but also sends warships to assist the US threatening Iran in the Strait of Hormuz.

With the arrogance of an imperialist power, Pompeo floated more US plans for Australia to host intermediate-range missiles in the Northern Territory, close to Darwin. Foreign Affairs Minister Marise Paine rushed in quickly to put the US cat back in the bag by denying any knowledge of such “request” from the US. The Australian government is either kept in the dark by its US masters, or is trying to cover up its complete subservience to US demands in the expectation of strong public opposition.

However, Dr Vince Scappatura, member of IPAN and one of the speakers at IPAN conference, stated that missile launchers brought by the US from Okinawa to the Talisman Sabre military exercises held at the end of July-early August were left behind after the joint exercises ended. These missile launchers will be used by the US marines in Darwin practising and preparing for war with China.

A further escalation of US imperialist agendas is the recently announced US plan for the nearby environmentally sensitive Glyde Point near Darwin to be developed as a navy base for US warships.

A broad anti-imperialist people’s movement is expanding and strengthening.

1.    IPAN message of solidarity to workers at DP World containers and their union the Maritime Union of Australia

This 2019 National Conference of Independent and Peaceful Australia Network (IPAN)  held in Darwin 2-4 August extends our solidarity and support to the MUA and its members at DP World containers terminal ports in Brisbane, Sydney, Melbourne and Fremantle.

IPAN stands in solidarity with wharfies and the MUA fighting to protect the hard won wages, working conditions and secure jobs that benefit working people.

Over the years IPAN has been encouraged by the support from maritime workers and the MUA’s  long history of campaigning for a just and peaceful world for working people.

We wish you all the best in your just struggle.

This 2019 National Conference of Independent and Peaceful Australia Network expresses its solidarity with Julian Assange, its resolute objection to his detainment in a high security gaol in UK, and its complete opposition to his extradition to the USA, for exposing the war-crimes of that country and others to the world.

We call on the Australian government to give him meaningful support and bring him home.

3.    No Australian involvement in US war on Iran

This IPAN conference urges the Australian government to reject pressures from the USA to send our ships to the Straits of Hormuz, adding to the pressures by the USA government to isolate IRAN and destroy its economy.

We reject any Australian involvement in USA war on Iran!

Australia must make its own foreign affairs policies!

This IPAN Conference supports the struggles of West Papuan people for independence.

IPAN affiliates are encouraged to reach out to West Papuan groups to support and publicise their activities.

This 2019 IPAN Conference in Darwin urges Australia to abandon plans to be a major weapons exporter, and instead promote Australia joining with New Zealand in Disarmament and Peace-making together with all geographical regional neighbours.