Yingiya Guyula began with the Djambarrpuyngu dialect of Yolgnu Matha, the language spoken across north-east Arnhem Land to introduce his speech at Garma Festival on August 3. Spirit of Eureka transcribed the rest of the speech he delivered in English. We present it below. 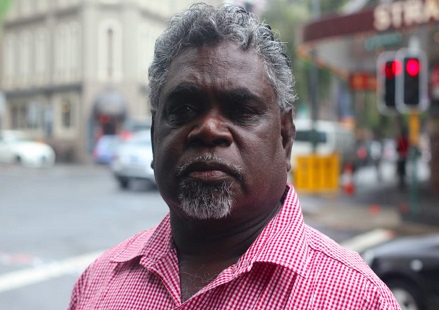 Welcome to Yolngu Country. My name is Yingiya Guyula. I am a Liya-dhälinymirr man of the Djambarrpuyŋu Clan of the Yolngu Nation.

My message today is clear. Our progress must come faster. And when I say progress, I mean a Yolngu vision of our communities and our way of life, and this will only happen when we have control of our future, and our Law and culture and are recognised.

We are a sovereign people. We never ceded our land. We are not conquered and here we stand.

When CDP [Community Development Program, a highly discriminatory work for the dole program] came in, I looked around and saw community leaders painting rocks for their occupation, for their jobs for the council. The Balanda system does not recognise our leaders. You see, our clan leaders, men and women, are managers of their clans, they are like CEOs of corporations. They have the highest level of education within their clan about Country, Kinship, Law. They hold the knowledge for a culture that is more than 60,000 years old. This is their PhD, and this is the knowledge they pass on to the children and the community.

This vision of leaders painting does not add up in Yolngu Law. These are our leaders, but their worth is not seen by Balanda systems, and it is not understood.

When governments engage with communities it is the clans that must be engaged with. Our governance systems must be recognised and traditional decision-making must be at the heart of the engagement.

There is a lot of talks at the moment about a Voice in the Australian parliament. I wonder what that will mean?

Let me tell you about my experiences as an elected voice in the parliament. I am a member of the Northern Territory Parliament, an independent member not aligned with either parties. I was preselected by a Yolngu Nations Assembly, a body not created by anybody else, but one that grew out of the Yolngu system of Law and Governance. I was then voted in by my people.

All of the good words and good actions should have meant that I was treated with respect and people should have been knocking on my door to work with them. Instead I find out about laws to be passed in the Northern Territory Parliament after they have already been drafted. I am briefed on policies that will be implemented or have already been implemented. I am listened to politely by ministers and their advisors during meetings, only for my words to have little effect on things that have already been decided long before talking to me.

I was not invited to the NT Treaty meetings or included in the NT Treaty working groups. When all Aboriginal members of the parliament were included in our Committee for Aboriginal Affairs, I was told, “No, that is only for the government members.” But then they invited Aboriginal leaders across the Northern Territory.

In my own election, organisations have told me they worry if they are working with me they may be reprimanded and lose their NT government funding.

Before this event, my office wrote to the leader of the Opposition and to the Minister for Indigenous Australians and I asked them for a meeting while they were here. Both of their offices wrote back to me to say they were too busy to meet with me.

I say this respectfully. I am a member of the parliament. I understand how busy schedules can be for a member and for a minister, and I know they are only here for a short time. And I hope we may meet in the future.

But I am a Yolngu member of the parliament and I am also a Djirrikaymirr [a judge in Madayin, Yolngu Law]. Arnhem Land is my Country. I am a senior elder, a songman. I speak for my people.

My voice should count. I should be heard and I should be listened to. It should be my door that is being knocked on. It should not be me knocking on doors and having them closed to me.

This frustration I have encountered is symbolic of what’s happening more broadly in communities. We are not being listened to.

This electorate used their vote to say, “Yingiya is our voice,” and they wanted me to continue with the message, Yolngu Ways First, and push forward for Treaty.

This is the message that I bring today. Progress needs to come faster, not by a foreign force of Intervention and the Stronger Futures which have caused great destruction and grief. Not by any foreign force.

Since the Bark Petition in the sixties, we have said, “Come, negotiate with us.”

A video of the speech can be watched here: https://www.youtube.com/watch?v=1wpzBK18k4Y&feature=youtu.be&fbclid=IwAR1me2PleIhTg-TT7kcpWTHnFnkV5XLQZsmcm7t–Kxnr4H4pxcoOZCkhBk