Australia at the Crossroads: Time for an independent foreign policy

Is your IPAN-affiliated organisation sending a delegate or delegates to the Darwin Conference? 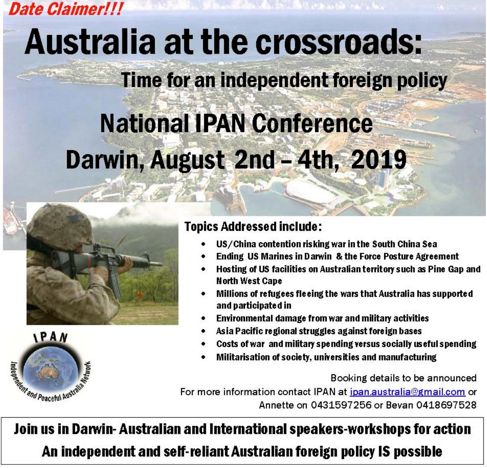 This year’s IPAN conference is being held in Darwin as it is the centre for the most recent establishment of a foreign troop presence in Australia with the numbers of US Marines planned to rise to 2,500 and an undeclared strength of US air-force at Tindal and Darwin and US naval forces using Darwin Harbour.

The conference is being held in the ominous shadow of contention in our region between the US and China which might break out into hostilities at any time; and Australia is currently joined militarily ‘at the hip’ with the US military and their objectives.

Never has there been a more important time for Australia to pursue an independent foreign policy for the economic well being and national security of the Australian people and that of our neighbours.

Let’s keep Australia out of US wars!

Topic areas include:
* Why Australia needs an Independent Foreign Policy
* The extent of foreign military facilities in Australia
* The impact of militarism on the environment
* The costs of militarism to Australians