Speech given by Humphrey McQueen 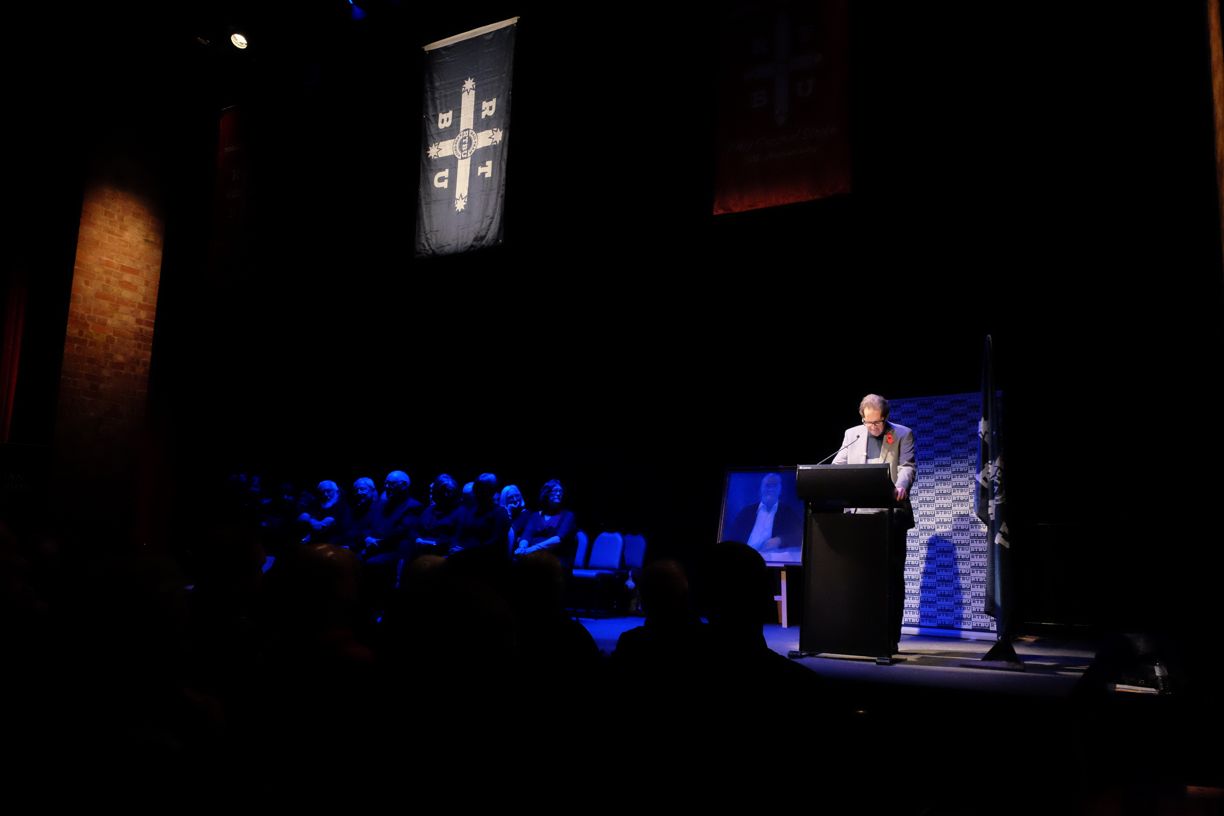 THE WISDOM OF OUR CLASS

Bliss it was in that dawn to be alive,
But to be young was very heaven.

Wordsworth on the French revolution.

And bliss it was in the dawn of 1 February 1968 to wake to the news that the Viet Cong were laying siege to the U.S. Embassy. On and on the Good Times rolled, carrying us through the May Days in Paris and past the Soviet suppression of the Prague Spring, to be buoyed by the on-going Cultural Revolution in China, thrilled by uprisings across Latin America, and transfixed by ‘The Fire This Time’ as Black Panthers brought the war home to the United Mistakes .

That was the year that was 1968 when ‘to be young was very heaven.’

But not only for the young. My father turned 70 in March 1969. He was a union rep in a Brisbane tannery. Recalling the class wisdom he’d acqui red fifty year s earlier from the Wobblies, he stuck up hand-written notices: FAST WORKERS DIE YOUNG.

The sweep of revolution around the globe raised our expectations for radical reform here.

A week before Clarrie’s gaoling, I took part in a four- hour stoppage by Victorian secondary teachers for more pay. But we were also pressing for control of the curriculum and the abolition of inspectors. Worker control spread from the Opera House site to factories facing closure.

At the dawning of 1968, much was necessary for our class while more seemed possible. In January, postal workers held an eleven-day national strike.

At that time, another dispute displayed the militancy that would be sparked into a forest fire by Clarrie’s imprisonment , 16 months later.

In December 1967, the Arbitration Commission increased the Metal Trades Award by $2.00 a week. A win for the workers.

The Commissioners also encouraged the bosses to absorb that increase into existing over-Award payments. A loss for the wage- slave.

On February 6, 200,000 metal workers struck nation-wide in defiance of ‘bans clauses’. A big blow against capital. On February 20, the Commission back-tracked on absorption. Another win for us.

That head- to- head saw qualitative change s in how each of the contending classes looked on the Penal Powers. Victories by the Metal unions did not end them . On the contrary, the boss class intensified its resort to them.

By 16 February, its agent s had secured 52 ‘no- strike’ order s in New South Wales alone; had laid over 200 charge s for contempt, and got the Industrial Court to impose fines totalling $20,000.

Yet, what looked like a win for the bosses spurred our class to end that way of punishing us.

The victory over ‘absorption’ spotlight s three pillars in the wisdom of our class. The first is that every contest over wages and conditions is decided by the relative strength of the contending classes.

To be at our full strength, we have to bind together our creativeness on the industrial, political, intellectual and cultural fronts.

The second pillar of class wisdom is that: ‘We won’t get from the courts what we can’t hold at the gate.’ The state is not our friend. On the contrary, the state organises capital and disorganises labour. 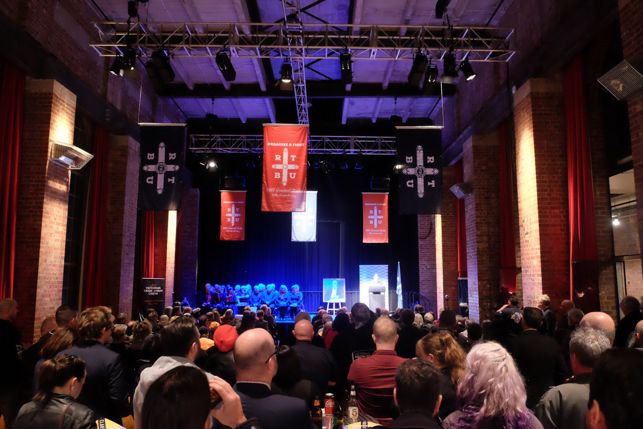 Sometimes, the state disorganises our class by organising us into the ‘proper channels’ of arbitration and the parliamentary road to no where.

At every turn, we struggle under a covert dictator ship of the boss class. That truth was the foundation of Clarrie’s Marxism- Leninism.

He understood why there could be ‘no peaceful transition’ to socialism. Clarrie spotlighted this wisdom in the title he gave to the pamphlet he penned after his release: ‘Worker s’ Power versus Penal Power!!!’

He and his comrade s based their tactics on these strategic pillars of class wisdom. A third pillar is our ability to make a critical analysis of capitalism’s political economy.

For instance, every shop steward could tell you why there can never be a fair day’s pay under the rule of capital.

Even when wages keep pace with prices, the necessity that capitaln has to expand to survive means that we are made to need a wider range of commodities. To give but one instance of what ‘affluence’ meant inside a worker’s home.

We must to cover the mounting expenses for needs that are being induced in us to meet the needs of capital. To do so, we sought over- award payment s and over time, pushed for equal pay, while even two- income households lent on hire purchase.

That double-bind goes some way to explain why teachers and nurses were also striking. And that’s why even bank clerks walked off in November ’69.

And that’s also why tens of thousands walked off in the days after Clarrie’s release.

The labour lieutenants of capital

On 8 March 1969, ‘Lord Monk of Lygon’ announced that he would not re-contest the Presidency at the A.C.T.U. Congress . His preferred successor was ACTU Secretary, Harold Souter, and not its research officer and advocate, R.J. Hawke.

A few days later, in the Downtowner Motel, Carlton, Hawke met one of the three Labour Attaches in the U.S. Embassy, Emil Lindahl. Lindhal came out of their discussion to inform the waiting leaders of the Indus trial Groups that the Embassy would be supporting Hawke, not the lacklustre Souter.

The CIA’s assessment was a measure of how the balance of class forces was shifting. Only a Left personality would be able ride the storm. That assessment is also why ASIO would pay Clarrie’s fines a few weeks later.

We’ve a duty to broaden appreciation of what happen e d in 1968-9 but even more for today’s activists to grasp ‘exactly how.’ Only by making sense of what was then possible and necessary will we be able to draw useful comparisons with today.

O’Shea strikes can’t be conjured out of the air, not even by screaming through a megaphone. Class wisdom is measure d not by brut e strength but by how we sharpen our tools.

Nor can the boss class ever give up. Long before ‘WorstChoices’, the ABCC and Un-Fair Work Australia, the political agent s of capital strove to twist the balance of class forces back to where it hovered before 1968-9.

Their reaction after May ’69 began in South Australia with civil claims against the AWU and then against the BLs for damages. Howard’s 1977 secondary boycotts amendments attacked our capacity to ‘stand truly by each other.’

In the process, they’ve trampled on their ‘new province for law and order.’ We are back to the nineteenth century when unions fell under the Criminal and Commercial Law.

All the way with Clarrie O’Shea 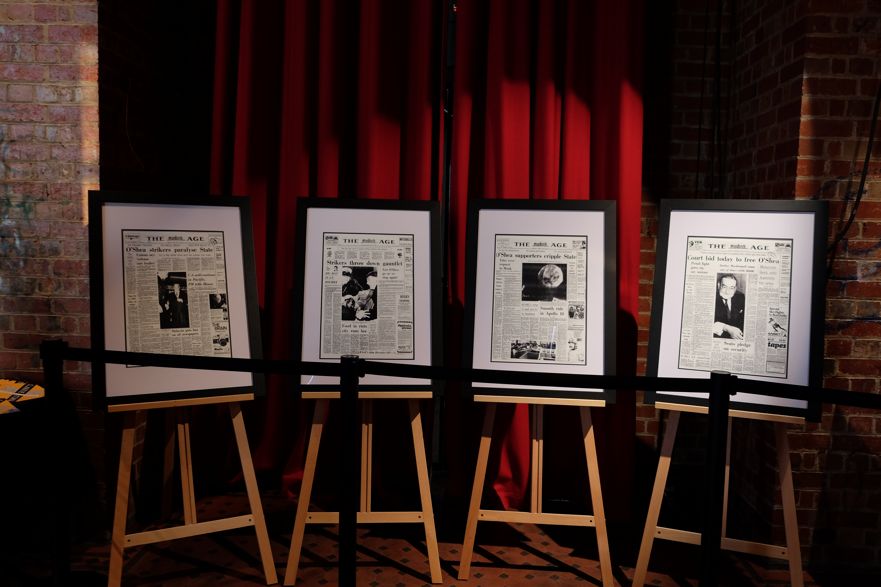 In 1970, I asked a French comrade how they planned to commemorate the Paris Commune of 1871. “We did that in ’68,” he exploded. With a stereotypical French flourish he added: ”To remember only anniversaries is like celebrating a marriage only on the wedding day. It means that love is dead.”

We’ve gathered to recall a famous victory. Yet we know that its finest celebration came in 1998 when we rallied to prove that the MUA is here to stay.

The spirit of standing truly by each other – the spirit of Eureka – swelled again as tens of thousands joined forces to beat back Worst Choices until sold down the river.

Which ever lot wins on Saturday, the result s can do no more than initiate a further bout of the mighty truth that Clarrie had learnt during a lifetime of being steeled in struggle:

There is an irreconcilable conflict between capital and labour.

To the class question of ‘whose side are you on?’ Clarrie’s life was his answer, and it remains our inspiration.