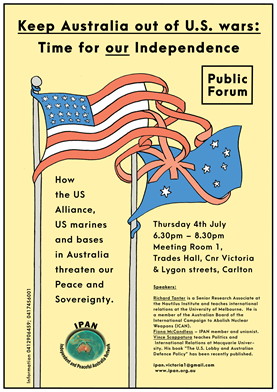 Friends and supporters of an independent Australia are invited to a Public Forum and discussion on 4th July, the U.S. Independence Day.

“Keep Australia Out of U.S. wars:  Time for our Independence from the U.S.A. and all big powers”

It’s time to put an end to the Australian governments’ obsequious support for US imperialist wars, US engineered regime changes and political and military interference in sovereign countries.

U.S. is the most aggressive world power threatening global peace, security and the sovereignty of countries.  It’s time for an independent and peaceful Australian foreign policy not subservient to any big power.