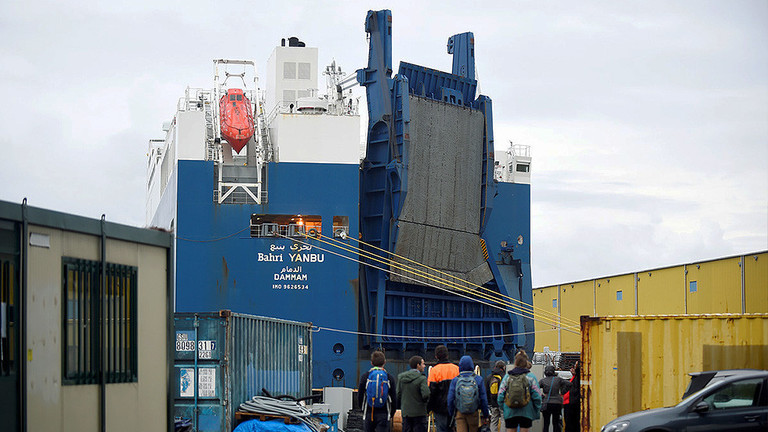 On May 20th, dock workers in the Port of Genoa, Italy, went on strike refusing to load weapons on the Saudi Arabian freighter Bahri Yanbu bound for brutal war on the people of Yemen. Supported by the Genoa peace and community activists, they called on the Italian government to “open the ports to people and close them to weapons.”

And they succeeded, forcing the Saudi freighter to leave the Port of Genoa without the drones and other military equipment to be used against the people of Yemen.

A similar strike by dock workers and community protests at Le Havre Port in France also succeeded in stopping the loading of arms on the Bahri Yanbu from that port.

These actions by Italian and French dock workers embody the international solidarity of working people and drew wide support from many peace and community groups.

This act of solidarity stands alongside the 1938 Dalfram strike in Port Kembla where Australian wharfies went on strike refusing to load pig iron being exported to Japan used for the manufacture of weapons in the war on the people of China, and during the Vietnam War when waterside workers and seafarers refused to load and crew ships to Vietnam.

Below – IPAN’s message of solidarity and reply message from CGIL reciprocating their solidarity with IPAN.

The Independent and Peaceful Australia Network (IPAN) sends warm greetings on your historic act of solidarity with the people of Yemen by refusing to load weapons on Saudi Arabian Freighter Bahri Yanbu to be used in the brutal war against the people of Yemen.

The strike by the Genoa dock workers and your declaration “We will not be complicit with the civilian deaths in Yemen” inspires and gives hope and confidence to millions of people around the world campaigning for peace and justice and against wars of aggression and profiteering by the multinational weapons corporations.

Your successful strike action showed the collective strength of workers and communities working together to stop predatory wars.

We in Australia are also campaigning against the export of arms to Saudi Arabia and our government’s subservience to US global military agendas and multinational weapons corporations.

We stand in solidarity with you and the people of Yemen.

Reply from the Genoa Dock Workers’ Union to IPAN’s message of solidarity.

Subject: I: Solidarity message to Genoa Dock Workers and their Unions refusing to load weapons to be used in the war against people of Yemen

On behalf of my union, FILT-CGIL, I would like to thank you for your warm solidarity letter.

We shared your letter with our dockers all over Italy and it has been really appreciated!

International solidarity is one of the fundamental value in our action, and we would like to return your message by wishing you success for the important and challenging tasks in which you are engaged.

Thank you so much!