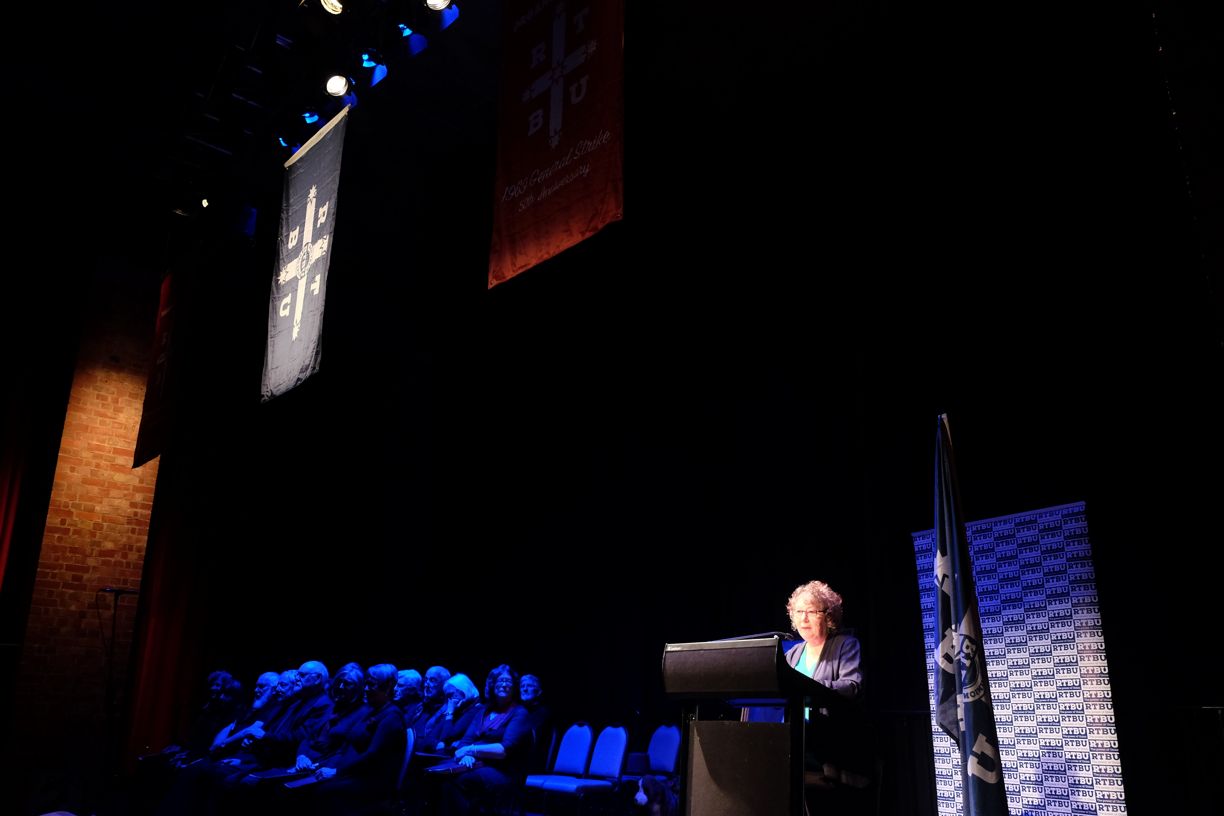 Shirley Winton is a founding member of Spirit of Eureka Committee, established in 2004.

Shirley has been involved in workers’ and community struggles for many years.  She was an organiser with the Communication Workers’ Union – Postal and Telecommunication Division and National Tertiary Education Union.

In 1969 as a young worker and student Shirley participated in the 6 day strikes and protests against the Penal Powers and for the release of Clarrie O’Shea from gaol.  She met Clarrie O’Shea on several occasions.

We have gathered tonight on stolen land of traditional custodians Yalukit willam clan of the Boon wurrung language Group (Wurundjeri People). Sovereignty was never ceded. We pay our respects to elders past, present and emerging and stand in solidarity with First People in their struggles for sovereignty and self-determination.

The 1969 O’Shea Penal Powers struggle continued the fighting spirit and tradition of the great Eureka rebellion.

During the peak of the penal powers struggle in 1969 I worked and studied part time.  My father was a leading shop steward in a large British owned printing company.  For years the penal powers and the need to fight them were discussed frequently at home, with friends, neighbours, in local shops, on public transport and later in passionate discussions with my student friends and in the anti-Vietnam War movement.

In 1950-51 the Menzies Liberal government tried to pass laws to ban the Communist Party believing this would destroy working class militancy and struggle.  But in a national referendum the Australian people soundly rejected the anti-democratic attempt to ban the Communist Party. Defeated, the government and big business turned their attention to rolling out sweeping anti-union Penal Powers.

Between 1951 and 1956 wave upon wave of anti-democratic punitive Penal Powers were rolled out by the Menzies Liberal government attacking workers and unions.

By 1966, after 800 penalties and millions of dollars in fines imposed on 28 militant unions, many became convinced that the Penal Powers could only be broken through mass struggle.  This awareness and willingness to fight the Penal Powers was the culmination of more than 10 years of systematic preparation by militant unions, workers and communists in workplaces and communities across the country.

Preparing for the battle 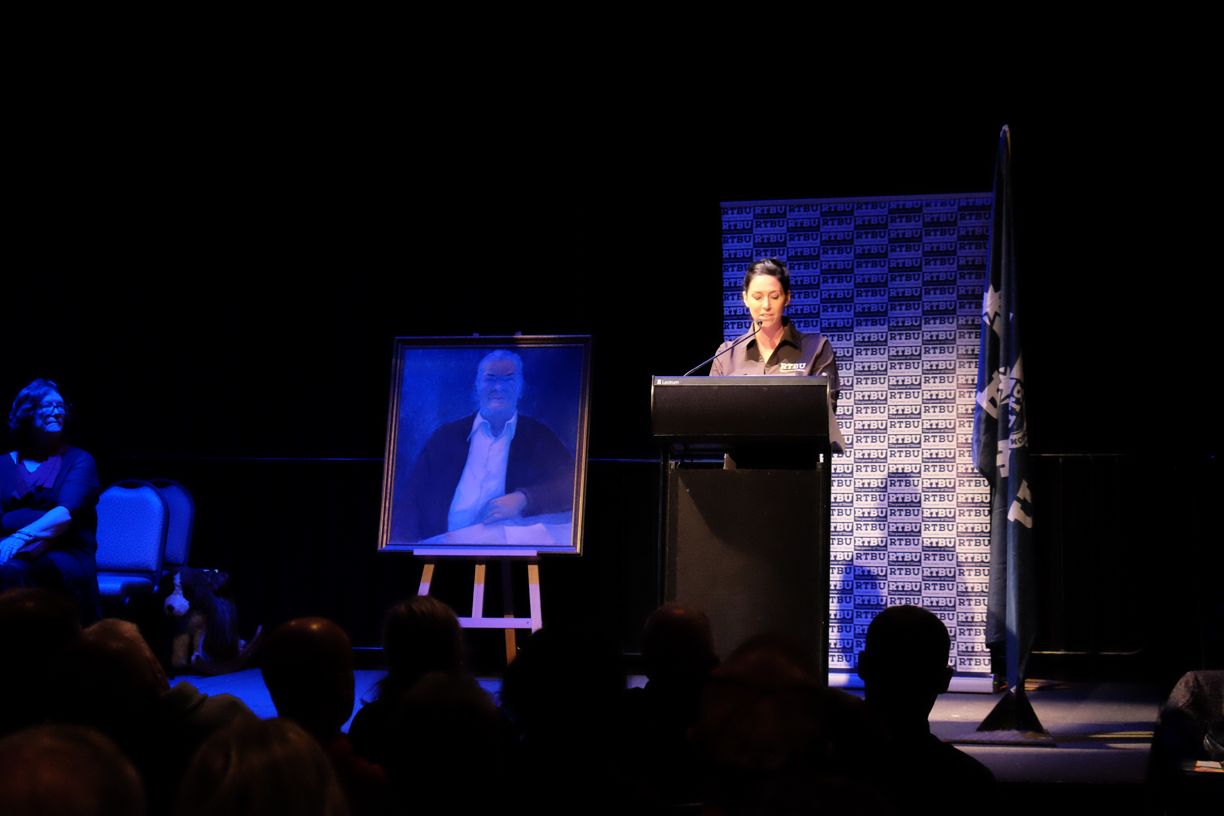 The 15 – 21 May 1969 mass strike and protests by more than a million workers and working people was not spontaneous. It was merely the final chapter in a 10 year battle that took a lot of hard, and often complicated, work.

Led by Clarrie O’Shea and Tramways Union members and other militant unionists and communists the struggle did not simply rely on parliamentary parties and the bosses’ courts to abolish the oppressive Penal Powers.  Rather, it was the power of informed, organised and prepared working class and their supporters that brought victory.

Workers never had the “legal” right to strike, nevertheless this didn’t stop thousands from striking, withdrawing their labour and resisting relentless attacks.

For Clarrie and other militant unionists and communists, landing in gaol in the course of doing your job fighting for workers was the price a militant worker or union official paid. For them going to gaol was never about the heroism of this or that individual – it was always about fighting for your class.

Years of pleading and appealing to bosses, politicians, parliament and the courts by union officials proved to be fruitless, whilst the bosses became more and more emboldened.   Clarrie and his comrades held the view that these were institutions of capital for protecting the bosses’ interests, especially big business. For these reasons Clarrie and others stressed that the working class and unions had to act INDEPENDENTLY of parliamentary parties; and that with patient work in raising awareness and organising at the grass roots it was only a matter of time, discipline and tactics before these laws would be challenged by workers’ organised mass action.

By late 1968 Clarrie, militant trade unions and Clarrie’s communist comrades decided that it was time to challenge the Penal Powers head on.  Clarrie said that someone had to do it and it may as well be him.  Clarrie and his comrades had an unwavering confidence and optimism in the power of the organised and mobilised working people to win this battle. 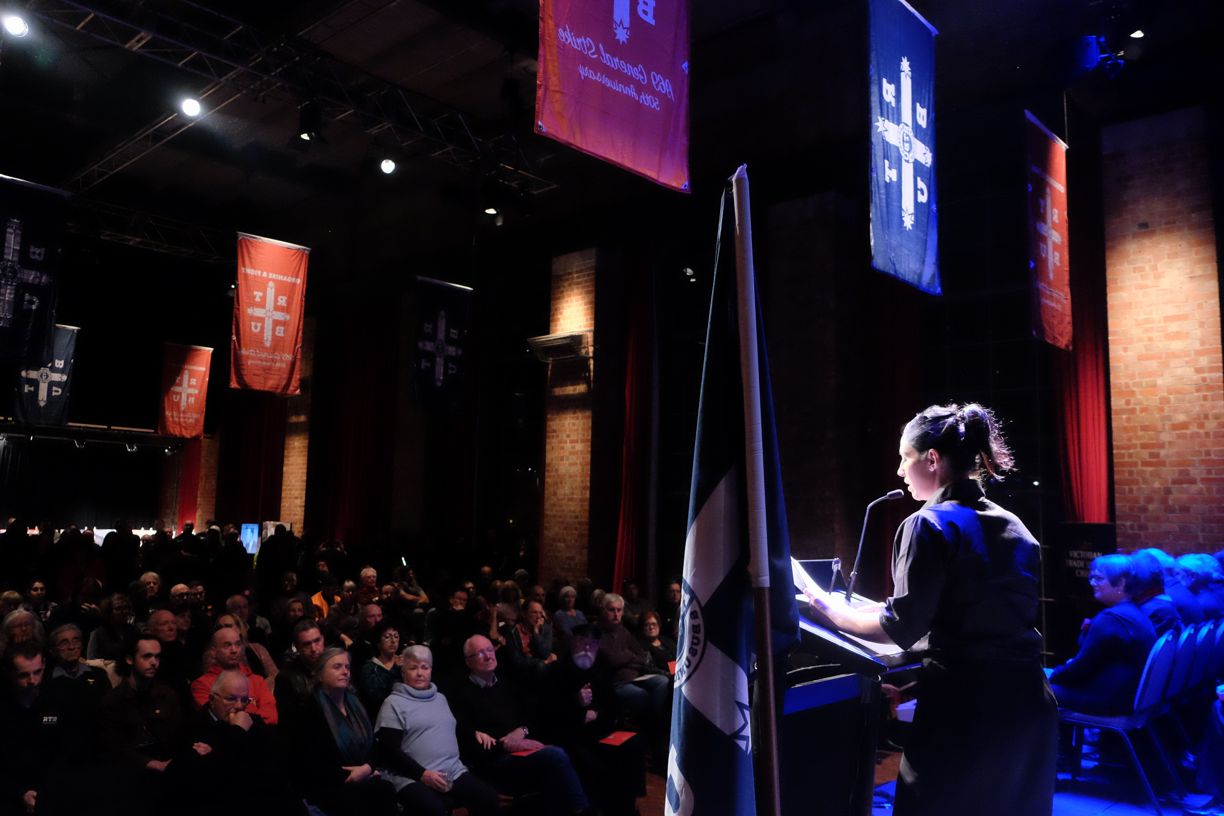 In the months before he was gaoled Clarrie ignored summonses to appear in court for refusing to pay fines imposed on his union. He stated that he was complying with his union members’ instructions not to pay the fines or hand over the union’s financial books to the government or the courts.  As part of the strategy he went into hiding.  The Tramway union’s finances and books were dispersed and hidden in different places, including in a large locked metal box dispatched interstate and buried on a remote farm.  It was then decided that the time was right for Clarrie to front the court on 15 May.

That morning Clarrie attended a packed meeting of 5000 angry workers at Festival Hall.  His fiery speech was met with roars of approval.  Workers and students passionately pledged to fight the Penal Powers and support Clarrie whatever it took; they marched to the courts with Clarrie, chanting “All the way with Clarrie O’Shea”, where thousands more had gathered.

Clarrie was gaoled immediately for an indefinite period.  The sentencing Judge was none other than the infamous John Kerr, who later became the Governor-General who conspired with the CIA to remove the Whitlam government in November 1975.

Within hours thousands of workers across the country downed tools, switched off the machinery, walked out and protested in the streets across the country demanding Clarrie be released and the penal powers repealed. In the next 5 days more than a million across Australia were on strike.  The Victorian economy almost came to a standstill. All public transport stopped, gas and power were running out.  School and university students abandoned classes.  Breweries and pubs closed down.  Thousands of workers, including in the Pilbara and Kalgoorlie, took wild cat strike action and defied instructions from their union officials not to.

It sent a shiver of cold fear into bosses and the government who, in desperation and panic, arranged an anonymous benefactor pay all of Clarrie’s and the Tramway Unions fines.  Clarrie was later told ASIO paid the fines.

Clarrie was immediately released from Pentridge gaol on the morning of 21 May.

Fearing a repeat of mass struggle, the government and the courts dropped their demands on other unions to pay hundreds of thousands of dollars in outstanding fines imposed by the Arbitration Court.

For Clarrie and the 28 rebel unions the legal and parliamentary strategies were only a secondary line of tactics to back up the main mass struggle, not as a substitute or replacement for it.

The road to victory – mass struggle on the ground 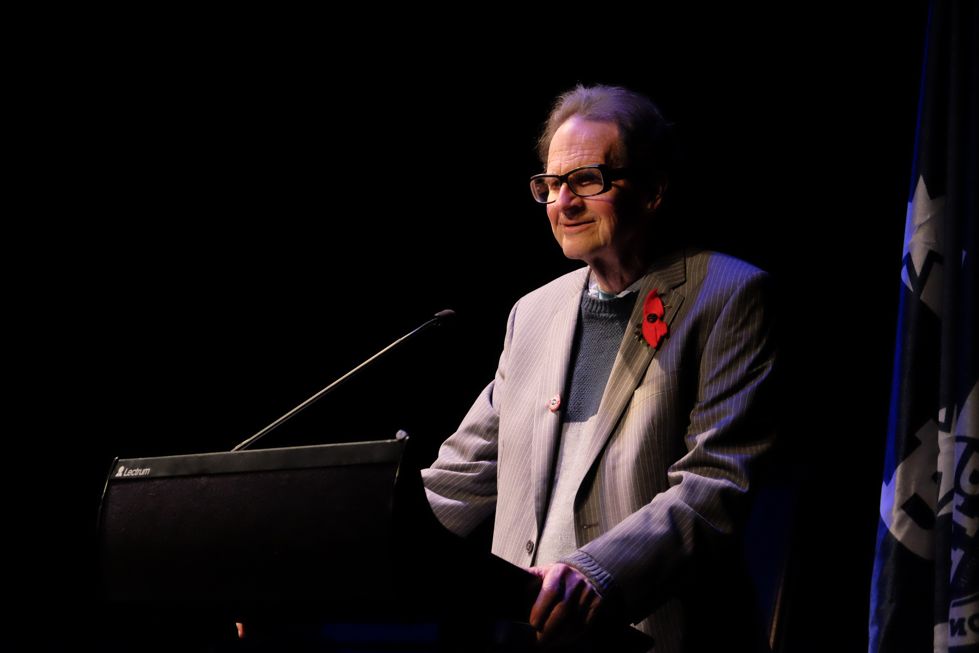 Ted Hill and Lionel Murphy and other progressive and democratic rights lawyers worked closely with Clarrie and the rebel unions advising on legal strategies.  They strongly advised Clarrie and the unions that the legal and parliamentary road should only be taken to supplement the main preparations for mass mobilisation.  That the real game changer is independent mass action and not to be substituted with reliance on parliamentary parties and the courts. Ted Hill was the Chairman of Communist Party of Australia (Marxist-Leninist) and Lionel Murphy later became the Attorney-General in the Whitlam government.

So where did Clarrie get his courage and confidence in the collective power of informed, organised and mobilised working class.  His working class roots and long experiences in the day to day working class battles grounded him deeply with the people.    He always remained loyal to his class and ordinary working people.  I met Clarrie several times. He was refreshingly humble, not arrogant and pumped up full of self-importance, and genuinely dedicated to workers and the working class.  He listened carefully and took advice from workers, offering, but not imposing his opinions and views. He never placed himself above ordinary working people and was highly respected by workers everywhere.  He proudly called himself a Marxist-Leninist Communist and used to say that “being a Marxist-Leninist Communist made me a better trade union official”. He said his politics gave him the understanding, courage and immense confidence in the collective power of working people.

Clarrie was a Communist most of his working life.  At the time of the Penal Powers battle he was one of 3 Vice-Chairpersons of the Communist Party of Australia (Marxist-Leninist).  The other two were Ted Bull (State Secretary of Waterside Workers Federation), and Paddy Malone (then Secretary of Builders’ Labourers’ Federation) who with their members were instrumental in the Penal Powers struggle.

For months and years, the courts, the government, media and employers joined forces in fierce and relentless attacks on Clarrie.  They demonised and vilified him for being a Communist.  He was constantly followed, spied on, threatened and abused by ASIO.  By attacking him and his revolutionary politics they hoped to crush workers’ militancy.  But it was all ignored and laughed off by workers who knew and loved Clarrie as he was, a dedicated and self-less Communist trade unionist working tirelessly for the interests of his class.  Clarrie himself shrugged off the orchestrated vilification.  His revolutionary class insights instilled in him the patience and confidence that the working class will be compelled to end capitalism. He used to say that the science of Marxism-Leninism gave him the tools in the struggle between labour and capital. And this is where he developed his revolutionary optimism in the future of socialism and communism.

Clarrie said many times that the penal powers struggle was much broader than the fight for workers’ wages, conditions and the right to strike.   He, along with others, saw the Penal Powers struggle as a political struggle of the working class.  “Because if workers confine themselves merely to economic questions, they confine themselves in a pretty narrow sphere.  It is necessary to go further than mere immediate economic questions.  For myself, I believe you must end capitalism altogether; it is that system that gives rise to the never ending economic struggles.” 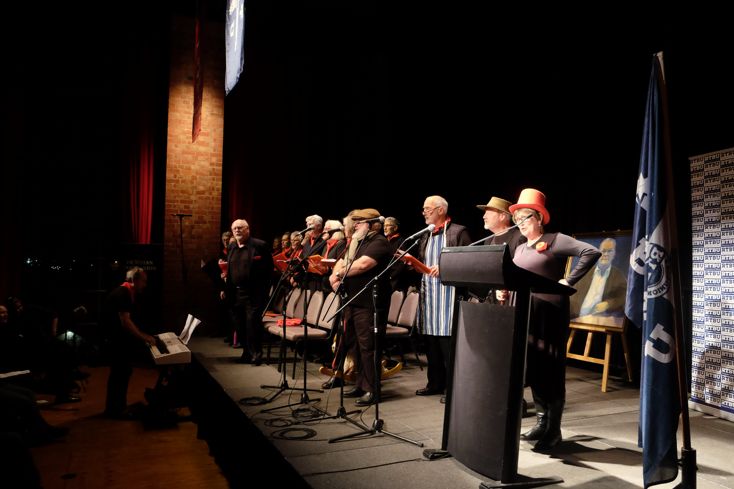 At that time in the lead up to the gaoling of Clarrie O’Shea many unions were involved in the anti-Vietnam war movement and campaign against conscription.  Many unions and workers were inspired by and supported young conscientious objectors who refused to register to fight in US war and went into hiding.  The union movement’s involvement, and leadership, in the anti-Vietnam war inspired broad public support for the struggle against the Penal Powers.

The Penal Powers struggle and the anti-Vietnam War movement inspired and empowered each other.

However, victory against the Penal Powers was short lived.  The Penal Powers were never repealed.  They were just not used against unions for a few years in fear of another outbreak of mass defiance.  In 1977 sections of the Penal Powers were brought back in the guise of the Trades Practices Act and Secondary Boycotts.  For next 40 years the anti-worker laws continued to be strengthened.

In 1977 Clarrie co-authored a pamphlet with Ted Hill, Ted Bull and Norman Gallagher, titled “Resist New Penal Powers” calling on workers to struggle again against the Trade Practices Act and Secondary Boycotts, the booklet states in part– “It was only the action, the struggle, of the Tramway workers, O’Shea and thousands of Australian workers that led to the paralysis of the penal provisions”.

And these words still hold true for us today as we prepare to fight anti-worker laws and change the rules.