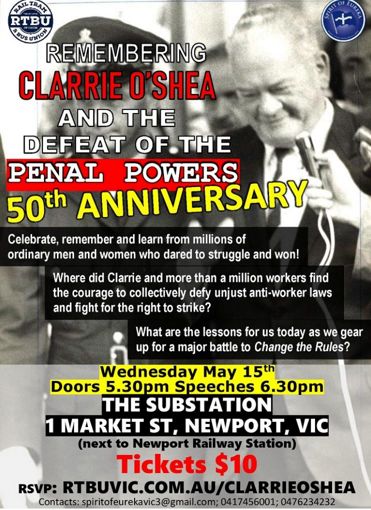 Clarrie O’Shea was gaoled for carrying out his union members’ instructions not to pay tens of thousands of dollars in fines imposed on the union for taking industrial action in defence of wages, working conditions and jobs.

Australian workers never had the right to strike.  Nevertheless, they did take “illegal” industrial action to protect wages, conditions and living standards. Between early to mid-1950s the Menzies government introduced harsh industrial laws, called the Penal Powers.  These industrial laws were designed to prevent working people from exercising democratic rights in their workplaces.  The anti-union laws and the courts imposed millions of dollars in fines on unions for taking “unauthorised” industrial action.  But this did not deter unions and workers from defying unjust industrial laws. The Tramways and Bus Union refused to pay the heavy fines.

For many years unions, workers and communities had organised protracted and broad grass roots campaign against the Penal Powers in workplaces and communities.  Unions and many community organisations worked hard in educating and raising awareness about the undemocratic Penal Powers and why they needed to be removed. A great deal of time and attention was dedicated to explaining, educating and raising awareness amongst working people in workplaces and communities. Clarrie and many workers insisted that only a mass campaign and mass movement could push back the penal powers, not relying on parliament and the courts to do justice.

In early 1969 Clarrie O’Shea was summonsed to attend court several times but refused.  When he did finally front up to court on 15 May 1969 he refused to answer questions about his union members’ finances and pay the fines. He argued that union funds belonged to its members who had instructed him not to disclose the books to courts and government.  He was immediately gaoled for indefinite period.  The sentencing judge was no other than John Kerr who later became the Governor General and conspired with the CIA and the British to remove the democratically elected Whitlam government.

After five days of non-stop industrial action, demonstrations and protests in the streets across the country Clarrie O’Shea was released from gaol on 21 May without him or his union paying a cent of the fines.   The fine was paid by an anonymous person, later revealed to Clarrie, on behalf of ASIO.  The Penal Powers were not used again for several years.

The broad unions and community campaign against the Penal Powers drew support from wide sections of society, including lawyers Ted Hill, and Lionel Murphy who later became Attorney-General in the Whitlam government.

Before and during the Penal Powers struggle many unions were also involved in the anti-Vietnam war movement and campaign against conscription.  Many unions and workers supported young conscientious objectors who refused to register to fight in the imperialist US war occupying a sovereign country.  The union movement’s involvement, and leadership, in the anti-Vietnam war campaign was crucial to building a broad peace movement.  Along with raising awareness about the Penal Powers many unions were also addressing the injustices of conscription and Vietnam War with their members.  They pointed out that it’s the ordinary workers who are used as cannon fodder in imperialist wars.

The union movement’s mass mobilisation and success against the Penal Powers and its involvement and support for the peace movement had inspired and gave confidence and courage to the broad anti-Vietnam War movement.

At the same time, it was the courage and militant activism of many young workers and students in the anti- war movement who actively supported the penal powers campaign that gave courage to workers and many unions to challenge the anti-union Penal Powers.

Clarrie O’Shea was a strong supporter and actively participated in campaigns for Australia’s independence and removing all foreign military and intelligence bases and troops from Australia.

He wanted to be acknowledged and remembered as a life time Communist dedicated to the working class.  He was Vice-Chairman of the CPA (M-L) at the time of the Penal Powers battle.  He said many times that the penal powers struggle was much broader than wages and conditions.  He was very active in the anti-Vietnam War campaigns including the massive national Vietnam War Moratorium on 8 May 1970, 12 months after the successful  Penal Powers struggle and mass mobilisation.