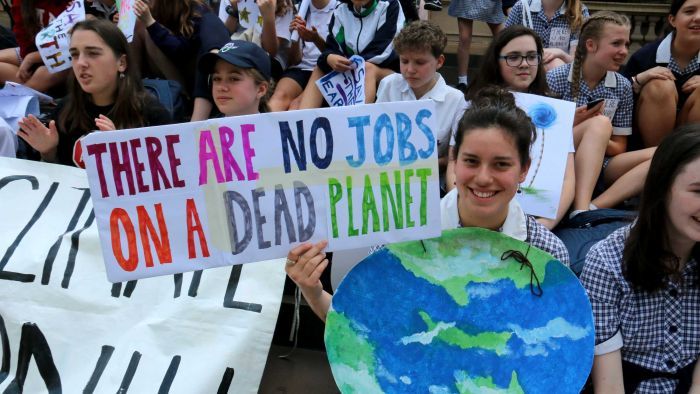 On March 15th I joined thousands of people in Adelaide in the Worldwide Strike For Climate Action organized by our youth. It was a positive and uplifting experience.

The older generation loves to be critical of our young people, ascribing anti social behavior, vandalism, gang violence, drug taking and various other evils to the entire group. The vast numbers of adolescents at the rally were engaged, respectful of the speakers and the crowd, they responded enthusiastically and appropriately to the speeches, followed direction to allow ambulances to get through and were a credit to us all.

At a time when prejudice and intolerance is dividing us, the issue of climate change was a powerfully inclusive one. The crowd included high school students, many primary aged children, families with toddlers in tow, adults who had taken time off work to support the cause and many older people. Hand written banners cleverly promoted their concerns and the teenage speakers one of whom was only 13 were inspirational. Banners that called for action, not talk, that pointed out “There are no jobs on a dead planet.” One anguished banner writer lamented “I cannot fit all my concerns on one sign.” My personal favourite asked “How many people does it take to change the globe?”

In a country where the condemnation of our education system, of the curriculum, the teachers and the students has become a national pastime, this rally demonstrated how much we have to be proud of.  The speeches were thoroughly researched and delivered so effectively, that one wishes our politicians were taking notes. While passionate and sincere, there was no abuse, no profanity or vilification. These were not the apathetic and politically ignorant adolescents the general public deplore, but fervent campaigners making powerful points and demonstrating democracy in action. Our young people reaped the benefits of real applied research, for a genuine cause, not teacher designed hypotheticals. They experienced people power and were making history themselves.

As I walked with them along King William Street the inevitable complaints from delayed shoppers were far from informed, respectful or tolerant. I observed the impatient motorists who seemed unconcerned at the contribution their petrol powered cars were making to global warming.

So on a day that unfortunately coincided with the horrific terrorist attack in Christchurch, we can look to our youth with admiration and confidence to fix up the messes, we the older generation have created.