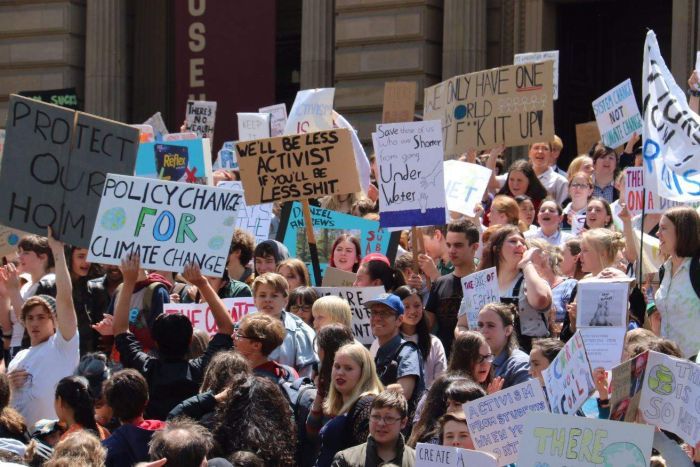 Thousands of Australian schoolchildren abandoned their classrooms on November 30, in defiance of Prime Minister Morrison, to protest the federal government’s lack of action on climate change. This upsurge in Australia was ignited by a young Swedish student Greta Thunberg, who vowed to protest against her nation’s politicians inactivity on the Paris Climate Change Agreements.

This in turn inspired a couple of students from Castlemaine, Victoria to carry out their own protest at the office of Bridget McKenzie, a National Party senator. Which then ignited a nation wide protest by primary and high school students last Friday.

Amazing scenes of student outrage, ingenuity and conviction were wonderfully demonstrated at these numerous protests in virtually all capital cities around the country. One gripping scene took place in Sydney where an organiser asked the demonstrators: “When I say student, you say power!”

The students roared back in unison and all of Martin Place could hear and feel repeatedly, “Student power!” Speakers at the protests criticised the governments lack of commitment to reducing greenhouse emissions and not moving to one hundred percent renewable energy as soon as possible. Students also demanded that there be no new coal mines and opposed Adani mining coal in Queensland.

The school student protests incensed Federal Government politicians who castigated them on the air-waves. Prior to the school walk-outs by the students Prime Minister Morrison admonished them with: “We don’t support the idea of kids not going to school to participate in things that can be dealt with outside of school, we don’t support our schools being turned into parliaments. What we want is more learning in schools and less activism in schools.”

Morrison’s name was brought up in the student protests by many speakers and without hesitation was always booed. He must now bemoan the manner in which he patronised students with the claim of ‘activism’. A clever re-joiner by one student to Morrison’s rhetoric towards the strike was: “If you were doing your job properly, we wouldn’t be here.

Matt Canavan, Resources Minister was not much better. He smeared the demonstrating students on Sydney radio with the appalling comment: “Walking off school and protesting, you don’t learn anything from that. “The best thing you learn about going to a protest is how to join the dole queue.”

No doubt the criticisms by reactionary politicians of the massive students strike for climate protests will be backed up by the right wing radio shock-jocks. Unfortunately for them the school students have little time for climate change deniers and now have discovered their own voice and power.

The political establishment and the fossil fuel corporations, particularly the coal industry, are steadily loosing their grip and influence on the Australian people, with school students being the latest addition. All power to school students for challenging the politician’s inaction on climate change!