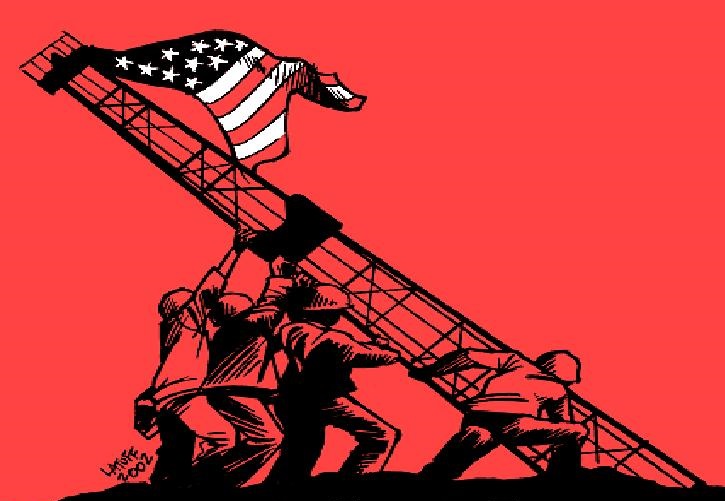 Or, Making the World Safe for Big Oil

Revolution in Berlin, and mutinous troops everywhere, cornered the Allies into offering terms less than unconditional surrender. The German leadership played on the Allies’s fear that the Second Reich would go the way of Czarist Russia and turn Bolshevik.

Having failed in July-August 1914 to block an inter-Imperialist war with the promised general strike, Europe’s working people imposed a cease-fire.

The ‘Peace’ Treaty signed at Versailles in July 1919 did not usher in ‘peace’. The Reparations Clauses were war by other means, as von Clausewitz might have put it.

The $US33 billion debt laid a basis for the inflation of 1923 and its long-term effects on German politics towards the triumph of Nazism in 1933. When the Germans did not meet the payment schedule, the French Army occupied the Ruhr in 1924.

Armies of Intervention in Russia included a clutch of Australian volunteers among British contingents into Arkhangelsk and Murmansk from the summer of 1918.

A more important front opened to capture the oilfields around Baku where Shell financed the White Armies.

Our Japanese ally didn’t withdraw from Siberia until July 1922.

The U.S. Imperialists also sent in troops to support of the White Army, using the Red Cross as its stalking horse, as it had in Cuba after 1898.

Proletarian Councils of Action, especially in Scotland, scared off plans to send supplies against the Reds.

The victors were set on imposing on the Middle East the 1916 Sykes-Picot-Sazanov agreement to divide the Ottoman Empire between the British, the French, the Italians and the Russians after the war.

The Bolsheviks exposed and repudiated its terms which survived as the blueprint for drawing more lines on maps to establish Syria/Greater Lebanon for the French, Iraq, TransJordan and Kuwait for the British, but no homeland for the Kurds.

On 2 November 1917, Britain’s Foreign Secretary Lord Balfour had assured the leader of the British Zionist Federation, Baron Rothschild, of the Empire’s support for a Jewish homeland in Palestine.

Persia had been under British control since 1905 through Anglo-Persian Oil (now BP), initially upon a fortune extracted from the labour of miners at Queensland’s Mt Morgan gold fields.

Encouraged by Britain, the Greeks invaded Turkey and, by August 1921, were poised to enter Ankara.

During their debacle on October 1922, British Prime Minister Lloyd George, asked for Australian support to ‘protect the war graves’.

Billy Hughes replied that the returned Diggers would much rather fight for the Turks than the Greeks whom they thought to be more pro-Hun than their enemy at Gallipoli.

Negotiating Peace Treaties dragged out till 1923 because the rival imperialists could not agree of how to divvy up the spoils but also because the locals had ideas of their own about how they were to be governed.

On 13 April 1919, British troops killed 379 unarmed protestors and wounded around 1,000 more in the Indian State of Amritsar.

The U.S. military pulled back from Europe, with the Senate refusing to endorse the Versailles Treaty or to join the League of Nations.

Isolationism left Washington free for the Marines to intervene across Central and South America, gaining exclusive and highly favourable rights over Mexican, Colombian and Venezuelan oil.

The U.S. Navy prepared battle plans against the Royal Navy over access to Middle Eastern oil. By 1928, Britain had admitted Standard Oil to Iraq and Persia, whereupon the rivals set up a cartel.

As Field-Marshall Earl Wavell put it:

‘After “the war to end war” they seem to have been pretty successful in Paris at making  “Peace to end Peace’.