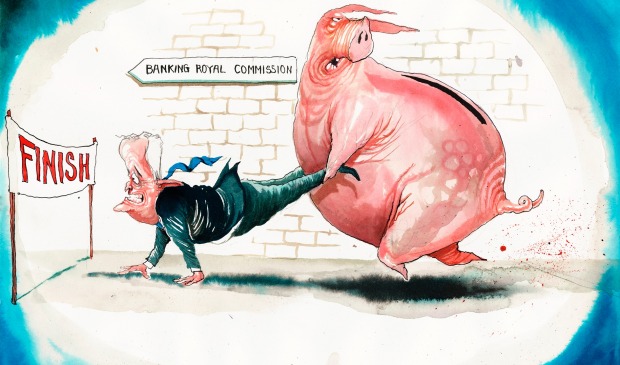 The terms of reference for this Commission are to investigate financial ‘institutions’. The remit for the 1935-6 one was to report on the ‘Monetary and Banking Systems’. Contrast institutions with system. We’ll start by setting out from how limited are the ‘institutions’ in the current case, before showing what an inquiry into the entire system would mean.

The institutions under investigation are the Banks and the Superannuation Funds. Neither functions without a battery of other institutions: accountants, actuaries, auditors, rating agencies, lawyers, lobbyists and Business Schools. Furthermore, all those of auxiliaries are directly engaged in Stock Exchanges, Foreign Exchange and Futures markets. Many are global enterprises. In particular, the banks are locked into foreign banks for fund-raising. The price-fixing scam between ANZ, Deutsche, Citibank and JP Morgan is exceptional in terms of how little money was involved.

An interrogation of financial institutions is not even half-way towards unraveling how the banks and superannuation funds operate if their supporting institutions are ignored. Taken together they are still less than capitalism.

A humble petition to Commissioner Hayne

The more shock-horror headlines tumble out of your investigations into the financial sector, the more we citizens are distraught because our regular consolation is denied us: what’s happened to that One Rotten Apple in the barrel? The best that the system’s defenders have managed is to picture the financial sector as one big rotten apple at the core of an otherwise healthy system of free enterprise.

Paris threw Golden Apples before Atalanta in the expectation that she could not resist stooping to pick up the glittering prize and thus allow him to win the race and the greater prize of Helen. The result was the destruction of Troy. Please, Mr Commissioner, spare us that fate. We shall happily trade all the Golden Apples in Christendom for the comfort of One Rotten One.

Please Mr Commissioner, make the Business Council, the Institute of Directors and their kind restore our faith in the essential soundness of capitalism by giving us back their One Rotten Apple.

Whenever I hear the term ‘bank Kulture’ I reach for my Mauser.

Whichever PR firm came up with ‘culture’ for corporate crime more than earned its million-dollar fee. There’s something ‘civilised’ about having the wrong Kulture. Not like a CFMEU organiser who has to bellow ‘fuck’ in order to get a site made half-way safe.

We are being sold the line that ‘bank Kulture’ is acquired in the same way we do our native tongue, innocently. In truth, corporate culture is learned behaviour. It is inculcated into staff, by bonuses and through example. The gouging of super fees by the retail Super funds run by the banks and the AMP is a meticulously structured operational method honed across decades. To ascribe such habitual thieving to an inchoate ‘culture’ is to revive belief in phlogiston and the aether.

There is nothing unique to banks about a ’Kulture’ of malfeasance. It is but one more expression of the needs of capital to expand in order to persist.

If ‘Kulture’ is to blame, a whack of responsibility must be sheeted home to Universities. The Schools of Business that have displaced Faculties of Commerce and Economics retain one shred of virtue: their label is not deceptive. Indeed, they have cooked up a subject branded  ‘Business Economics’.

Business Schools also offer courses on ‘Business Ethics’, which is more than an oxymoron. Universities train executives in how to get away with it. But should they get sprung, they then enter their pass mark in ‘Ethics’ as a plea bargain.

Transfield’s co-founder, Franco Belgiorno-Nettis, subsidised the visual arts out of the profits he made from exploiting workers while swindling customers and governments. He confessed to his corporation’s official historian that he had engaged in corruption and strong-arm tactics: ‘We cover this with a veneer of civilisation.’ In a class society, each act of civilisation is fed by a piece of barbarism exacted from workers whose creativity and suffering pay for the benefactor’s generosity. Such is the ‘Kulture’ of capitalism.

$700 million is exacted on the Commonwealth bank for more than 50,000 instances of facilitating money laundering over three years.

Had a bikie gang had been up to the same, its members would have had their assets seized.

Had some Muslim facilitated the transfer of funds to Hamas, her house would have been raided by Dutton’s goon squads and she would have thrown in the slammer for several years after a partly secret trial.

If the legal costs of appearing before the Commission, and the PR effort headed by Anna Blight, are tax deductible as legitimate expenses, why not the $700m. fine? After all, both are incurred in normal course of bank business.

The crummy penalty is not a matter of double-standards but of no standards when it comes to corporate crooks. The proof came when CBA’s share price went up on news of the $700m. fine.