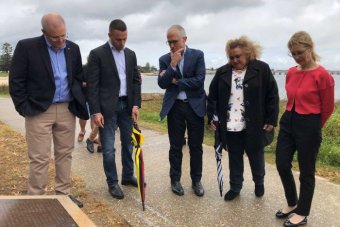 In late April the Coalition government announced another Captain Cook memorial will be built to commemorate the 250th anniversary of his landing at Kamay/Botany Bay. It will be part of a $50 million redevelopment of the site where the English explorer and the crew of his ship Endeavour, first set foot on Australian soil.

An “aquatic monument” of Captain James Cook, a museum, visitors centre and ferry wharves, costing $3million, will also acknowledge Cook’s ‘encounter’ with the First Nations at Kamay/Botany Bay. Prime Minister Turnball, as is his habitat, spoke aphorism’s a plenty to describe the significance that Kamay/Botany Bay has for him.

He opined, “And this is a momentous place, one we need to celebrate understand interpret and reflect on.

“One that has to be deeply understood and reflected and interpreted with wisdom and with empathy.

“It was a momentous occasion in our history.”

As much as Turnball and Treasurer Morrison bleat about the Cook memorial sensitively understanding the meeting of two cultures, their large 250th commemoration for 2020 is flawed. The memorial will not accept or acknowledge the illegal possession of the East coast of Australia by the English, nor their violent dispossession of the First Nations’ country.

Morrison’s explanation of the historical event that took place on 29 April, 1770 are misleading to put it politely. His serene historical representation of the day Cook landed at Kamay/Botany Bay is one of aboriginal canoes unworriedly bobbing out on the water as the English sailors innocuously step onto that foreshore.

This is at odds with Cook’s own journal account of that landing:

As we approached the shore they all made off except two men who seemed resolved to oppose our landing … as soon as we put the boat in they again came to oppose us upon which I fired a musket between the two which had no other effect than to make them retire back where bundles of their darts lay and one of them took up a stone and threw at us which caused my firing a second musket load … and although some of the shot struck the man yet it had no other effect on him than to make him lay hold of a shield or target to defend himself … immediately after this we landed which we non sooner done than the thrower two darts at us this obliged me to fire a third shot soon after which they both made off, but not in such haste but what we might have taken one …

all they seem’d to want was for us to be gone.

This is backed up by the fact that the British Museum has in its possession a stolen Aboriginal shield pierced by one of the shots fired. Those recorded facts are of no consequence to Morrison, who trenchantly states about that the Cook memorial, “The way we intend to implement it would be in a sensitive way, but one that in no way stepped back from acknowledging the national significance of that day almost 250 years ago.”

“It is when that next chapter of Australia’s ancient story began being written and that’s the most modern part of that story… it’s taken us to the incredible country we are today.”

The Coalition government’s sophistry and deliberate omissions about Cook’s landing and the whole English invasion of First Nation’s country is a repugnant, white conqueror’s dog-whistle designed to whip up racism in electorates across Australia, which they calculate will secure their re-election. This fake history that is silent on violent dispossession but loud on colonial aggrandisement has been governments’ tool of trade from the First Fleet through to contemporary parliamentary governments.