In a victory for workers and the democratic rights of all Australians, the attempted ban by the Turnbull government’s Australian Building and Construction Commission (ABCC) on flying the Eureka flag from cranes on building sites has been defeated. 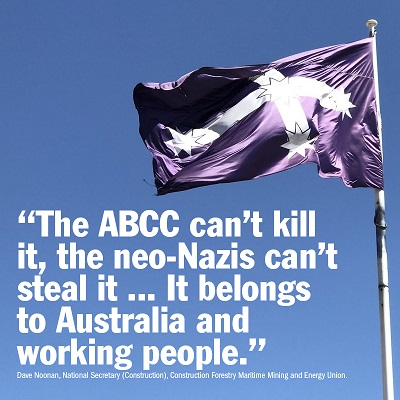 For 164 years big business and their puppets in parliament and the courts tried to kill it, hide it, and smear it with neo-nazi dirt – but nothing can suppress the spirit of Eureka rebellion for justice, democratic rights and an independent Australia.

164 years on and they still can’t tear down the working people’s flag that inspires the struggle for justice, courage, unity and solidarity.

This is a great victory for working people in Australia that was only made possible by the open defiance and show of strength of workers around the country who were determined to fly it anyway in the face of repression.

The following article has been reproduced from the website of The Australian.

CFMMEU’s Eureka flag win a rebuff for the ABCC

The Fair Work Commission has ruled that Eureka and construction union flags can be flown from cranes on building sites, in a rebuff to the Coalition’s building industry regulator, the Australian Building and Construction Commission.

Commissioner Bernie Riordan found that flying union or Eureka flags did not breach the government’s building industry code. The code prohibits any conduct that would imply that joining a building union was anything but an ­individual choice.

Mr Riordan said he failed to see how the flying of the Eureka flag on a building site crane would convey the view to any employee that membership of the Construction Forestry Maritime Mining and Energy Union was anything but voluntary.

“The display of a ­Eureka flag over the course of Australia’s history has been associated with a variety of causes and campaigns,’’ he said.

“I am not aware of the CFMMEU having an intellectual property right over its use and meaning.

“According to Wikipedia, the Eureka flag has been used as a symbol by bikie gangs, the right-wing Australian First Party, the neo-Nazi movement and sporting clubs such as Melbourne Victory.

“It was also used extensively in the 1975 federal election campaign following the dismissal of the Whitlam government.”

Mr Riordan, a former Electrical Trade Union official, said he also failed to see how flying a CFMMEU flag on a crane a few hundred metres above a worksite would cause a worker to form a view that compelled them to join the union.

He said the union flag would be viewed by a small percentage of site employees working on the upper deck, and the overwhelming majority of workers would have minimal exposure to the flag as they performed work “looking down, not up”.

The CFMMEU and builder Watpac had asked the commission to make a “without prejudice” recommendation in relation to the meaning of the code.

Mr Riordan recommended Watpac refrain from issuing directions to employees to remove the Eureka and CFMMEU flags from cranes, and not take disciplinary action against workers previously asked to remove flags.

The ABCC, which was not party to the proceedings, said today its responsibilities to ensure code compliance were not affected by the commission’s recommendation.

“We will continue to monitor compliance with all aspects of the building code 2016, including the use of building association logos, mottos or indicia,’’ it said.

The ABCC dropped probes this year into Watpac and Probuild for displaying construction union flags and posters on building sites, but warned the industry that employers faced bans if employees showed the Eureka flag image.

Dave Noonan, the national secretary of the CFMMEU’s construction division, said the decision showed the folly of the ABCC’s “bizarre ideological culture wars”.

‘The ABCC can’t kill it, the neo Nazis can’t steal it,’ he said. ‘It belongs to Australia and working people.’

ACTU secretary Sally McManus said unions were glad the commission dismissed the “absurd restriction” on the rights of workers to fly the flags.

“The ABCC is a politicised agency that has constantly run afoul of the courts and the commission. Its last director resigned in disgrace.

“It should be abolished,’’ she said.