In opposition to the US, UK and French, 14-4-2018 missile attack on Syria, an urgent protest was held in Adelaide that afternoon. Below is a speech given by a Spirit of Eureka representative. 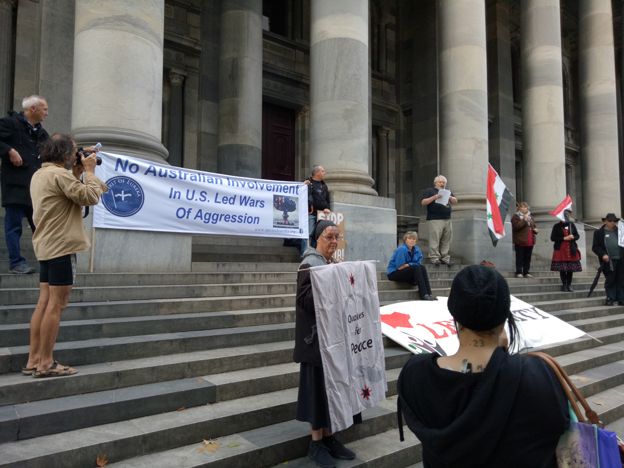 The US, UK and French forces missile attacks against supposed Syrian chemical weapons sites and military installations is a criminal act with the potential to ignite an international conflagration. The US’s unwillingness to wait for an independent investigative team from the Organization for the Prohibition of Chemical Weapons (OPCW), to inspect the site of the alleged attack in the Jihadist-held town of Douma last week more than suggests that the chemical attack was a fabrication.

Remember this imperialist power, the United States, asserted that Iraq had weapons of mass destruction back in 2003, which were never found. This fake news was used to justify the ‘Coalition of the Killing’ to invade and destroy Iraq. The same with Libya. Now both countries are riddled with Jihadist fighters wreaking havoc throughout the Middle East. Ostensibly, the West is suppose to be fighting these Jihadists, but the evidence suggests they actually support them – with help from Saudi Arabia and the Gulf States – and use them to create chaos in Iraq, Lybia and Syria and justify the US’s interference in the region.

The truth of the matter is that Syria and Russia have virtually defeated the Jihadists and the US has no justification for staying inside the country now. So why not fabricate a chemical attack and present images of so-called victims to the world’s mainstream media, moralise opposition to chemical warfare and carry out an attack against Syria and keep interfering in the country.

As to be expected the Australian Prime Minister Turnball and Defence Minister Payne have supported the attack on Syria, moralising against the use of chemical warfare. However they have nothing to say about the US having the largest stockpile of chemical weaponry in the world. But hypocrisy is a well worn art-form for both Turnball and Payne. Back in 2013 when the first alleged chemical attack was reported, UN investigator Carla Del Ponte stated there were strong suspicions that Jihadists in Syria used Sarin nerve agent against Syrian civilians. True to form the Western and Australian media and political leaders just ignored this evidence and continued on with their fake news, that it is Bashar al-Assad government who is the war criminal.

The US bellicose militarist behaviour in Europe, Middle East and the Indo-Pacific is the greatest danger for the world peoples’ today. Australia’s political leaders supine willingness to support both diplomatically and militarily the US aggression will bring great danger to the Australian people. Australia needs to stop being a dependent, client state of the US and strike for a truly independent foreign policy. We say, withdraw from the US Alliance and Yankee warmongers go home!