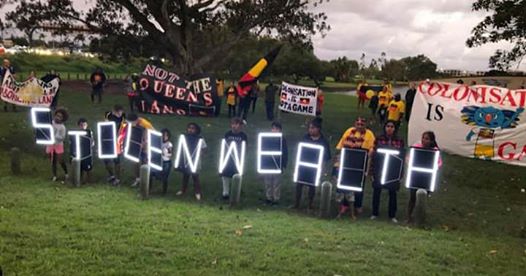 The chasm between the opening ceremony of the 2018 Commonwealth Games (April 4 to April 16) – which presented a performance of 60,000 years of seamless progression from Indigenous to ‘modern Australia’ – and the First Nations’ protest against the “Stolenweath” games outside the Gold Coast Stadium couldn’t be any more starker. The festering conflict involving the Commonwealth Game’s ‘celebration colonialism’ and the First Nations’ resistance to dispossession goes back to the magnificent protests of the 1982 Brisbane Games, continued by the 2006 Melbourne Games and now the 2018 Gold Coast Games.

Establishing a Sovereignty Tent Embassy in Bundjalung Country (the Gold Coast), the Warriors of the Aboriginal Resistance and the Brisbane Aboriginal-Sovereign Embassy mobilised Indigenous activists from NSW, north Qld, NT and WA and their non-indigenous supporters to oppose the “Stolenweath” games. First Nations’ activists successfully mounted a number of creative actions: An opening ceremony protest; a walking protest that blockaded trams and traffic throughout Southport; stopped and delayed the baton relay which caused Prince Charles to be late for the games, where three people were arrested including Dylan Voller, the Don Dale torture survivor; harassed and embarrassed the Channel 7’s Sunrise program for supporting the stealing of Aboriginal children from their families; and a cleansing march on Surfers Paradise beach.

The First Nations’ activist Statement of Reason against the “Stolenweath” games poignantly expressed: “We gather to demonstrate our free sovereign conscience and our rights as a united people, in protest. For many of Australia’s Aboriginal people the past two centuries of Commonwealth colonisation has involved generations of our people being forcefully subjected to undeclared war, genocidal policies and many historical crimes of injustice.

The message came through loud and clear during the “Stolenweath” games that what is called Australia is in fact Indigenous land and its occupation by the British colonisers was and is still illegal. That is why the royalty and the accompanying parades were prime targets for protest by First Nations’ activists.

Because events like the Commonwealth Games opening ceremony, Australia Day and Anzac Day ignore and emasculate First Nations’ history, battles and suffering for their country and their rightful claims for sovereignty and genuine treaties. First Nations’ people have had an enormous struggle to achieve the modicum of recognition and pitiful entitlements they now occasionally receive. Quite often ‘benevolent’ Australia tightly controls and habitually denies First Nations’ people their current rights and entitlements. 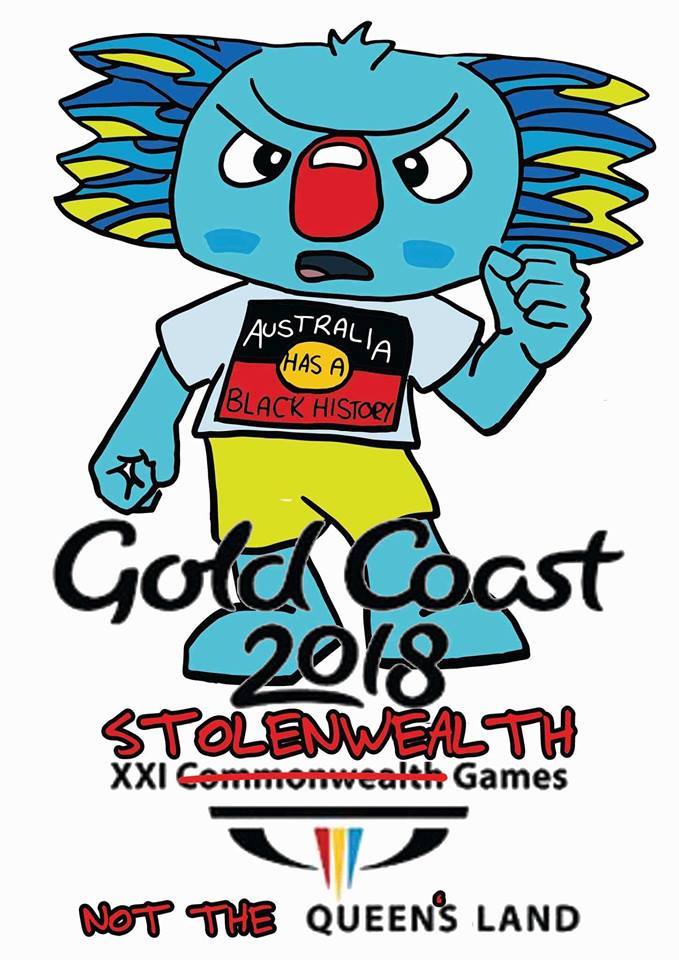 Non-indigenous Australia needs to un-colonise their minds about the facts of this country’s history and honestly acknowledge the truth of what took place for the last 230 years. In fact they could also turn their minds to some of the odious history of the Commonwealth Games.

Back in the 1930s it was called the Empire Games when the mantra was, “Empire above all else, Australia second.” The Empire Games were seen by the “British to their bootstraps” as superior to the Olympic Games.

Some even campaigned for all of Britain’s dominions to merge into a British Empire Olympic Team. British racial superiority reach its height when The Sydney Morning Herald editor of those times suggested that Australian athletes shun contact with foreigners at the Olympics.

In years after the Second World War racism raised its ugly head in the Commonwealth Games, when Australian officials astonishingly campaigned for Apartheid South Africa and Rhodesia to participate in the “friendly games” as they came to be known. Both the 1982 Brisbane and 2018 Gold Coast Commonwealth Games saw the organised forced removal of the unsightly homeless out of these cities.

The holding of mega-sporting events such as the Commonwealth and Olympic Games is to co-opt  a particular city’s population and the peoples around the world in capitalism’s ‘bread and circus’ celebration of itself. The political issues of dispossession, invasion, conquest, exploitation and oppression are conveniently camouflaged and erased on these momentous occasions.

Nonetheless, the First Nations’ have once again successfully pricked the conscience of Australia and demonstrated that this country was and always will be Aboriginal land.