This article was produced by Spirit of Eureka (Sydney) and was handed out as a two-page A5 flyer at the March for Science rally on Saturday 14th April. 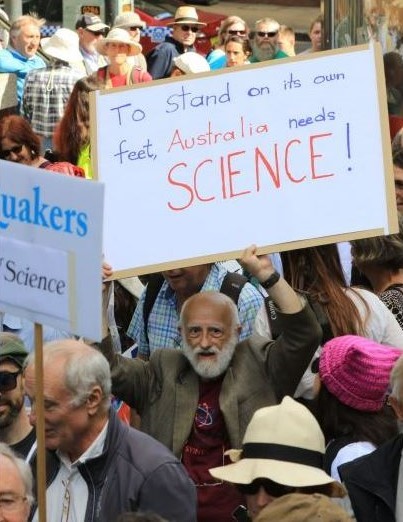 In 2018, the attack on science throughout the Western world is continuing unabated. Massive political interference is rife against scientists and science whose conclusions might reduce multinationals’ profits. In Australia, irreplaceable CSIRO scientists such as Dr John Church, an expert in sea-level rise, lose their jobs.

Meanwhile, the Federal Coalition and Queensland Labor governments line up behind the proposed Adani Coal Mine, a major threat to Australia’s biodiversity, peddling the anti-scientific “clean coal” theory. They willfully ignore scientific research showing that burning fossil fuels—coal or gas—emits toxic and carcinogenic substances into our air, water and land.

In July 2017, a damning report from the Black-throated Finch Recovery Team was submitted to Federal Environment Minister, Josh Frydenberg. Dr Tony Grice, chair of the team, said: “Adani’s Carmichael mine will destroy a large part of the best remaining habitat for the Black-throated Finch… Losing this rich habitat would be a major blow to the chances of the bird surviving.”

Behind the support for Adani stands the Business Council of Australia (BCA)—the chief policy-making body for the hundred plus largest corporations in Australia, predominantly foreign-owned, mainly US multinationals.

In an interview on Country Hour ABC, 7 March 2018, Jennifer Westacott, BCA’s CEO, claimed the debate around Adani is “one of these things that says we are not open for business. It’s one of these things that sends a really inconsistent message to international companies that Australia’s not an easy place or a predictable place to do business.” She added “lobby groups or protest groups in the inner cities of Melbourne and Sydney should not be dictating the opportunities of people in regional Australia” and claimed the Adani proposal “has been through a rigorous environmental approval”. So, we shouldn’t even debate Adani and it’s all environmentally ok. Tell that to the Black-throated Finches!

To view this article as a flyer click here.