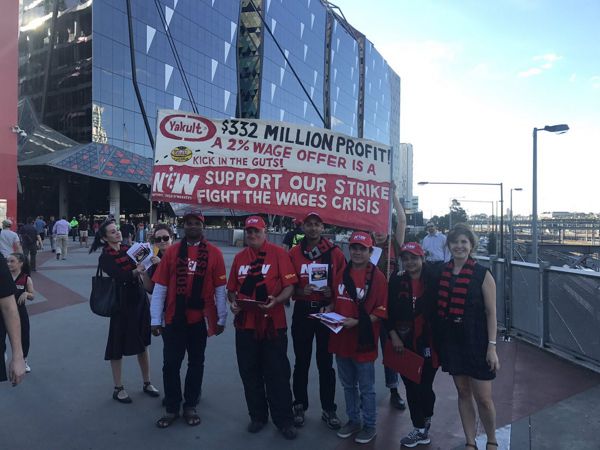 The Australia Institute, a progressive policy think-tank, pointed out recently that: “Over the last two years the average tax paid by the companies calling for the Senate to pass the tax cuts was 12.35%; half of them paid no tax last year.”

As part of the campaign for the company tax rate to be reduce the from 30% to 25% the CEO of the Business Council of Australia together with 10 CEOs of  major corporations (BHP, Fortescue Metals Group, JBS Australia, MYOB, Origin Energy, Qantas, Wesfarmers, Woodside Energy, Woolworths) have ostentatiously declared in The Australian newspaper the following “Commitment to the Senate”:

“…commit to invest more in Australia which will lead to employing more Australians and therefore stronger wage growth as the tax cut takes effect.”

Actually this CEOs commitment is Clayton’s pledge because a close inspection of their wording reveals they are only committed to “invest more”. There are no assurances in their ‘Commitment’ of what level of jobs and wage growth will be achieved, how much they will in fact invest, and what would be the consequences if CEOs failed to deliver on their ‘Commitment’.

In reality there would be no consequences for CEOs if they didn’t deliver on their ‘Commitment’; most of them would be gone (through scandal or moved on to another corporate CEO position) by the time tax cuts were implemented. It also begs the question of how committed the other 122 (92.4%) of the 132 CEOs of the BCA are to investing more to see jobs and wages growth; they remain silent, so one can assume they’ll take the tax cut and do nothing for it.

To impress upon us how much they do for the nation these ‘committed’ CEOs boast they are the biggest employers in Australia. However these 10 corporations employ 493,600 workers combined, which is less than 4% of all employment in the country.

The facts about investment, growth, employment and wages

Because of the slump in the Australian and World economy investment overall is dropping due to the tendency for the rate of profit to fall. This doesn’t mean corporations are not making profits, just that they dropping down and not rising like CEOs expect. Consequently CEOs start investing in speculative capital rather productive capital. In fact Australia has suffered a four-year slump in corporate investment. Expenditure by business on new machinery, equipment and buildings had dropped 2.1% by February, 2017. This was a twofold contraction than was predicted by economists and a fourth straight quarter decline since 2016.
•    New capital expenditure fell overall from about $42 billion a quarter in 2012 to $27 billion per quarter in 2016, a drop of 36%.
•    Mining investment nose-dived almost 60% since its high in 2012, and fell by another 27% in 2016-17; and there has been no rise in non-mining investment.
•    Australia’s dependence on foreign investment looks ominous; annual foreign direct investment inflows halved, to less than $30 billion, between 2013 and 2015.
•    Roy Morgan polling surveys show unemployment and under-employment now affects more than 2.4 million workers, or nearly 18% of the workforce: 1.3 million are jobless and 1.1 million are under-employed.
•    Wages figures continue to show record low growth with average weekly earnings rising just 1.6% in 2016, just slightly above the consumer price index rise of 1.5%. Reserve Bank delusion of a higher wages growth to boost the economy hasn’t come to pass.

Only 8% of the BCA’s member CEOs have offered to increase investment in Australia if there is a cut in the company tax rate. This ‘Commitment’ group of CEOs insist, while they don’t guarantee, that job and wage growth will follow increased investment, although these corporations provide less than 4% of employment combined in Australia.

It is a Clayton’s offer because none of these corporations have paid the full company tax rate of 30% between 2014-16. In fact these “Commitment” corporations paid on average 12.35 per cent company tax over the past two years; that’s their real commitment to Australia!

When we can see the wholesale sackings, insecure employment and attacks on wages and conditions carried out by these corporations, we know their CEOs speak with fork tongues.