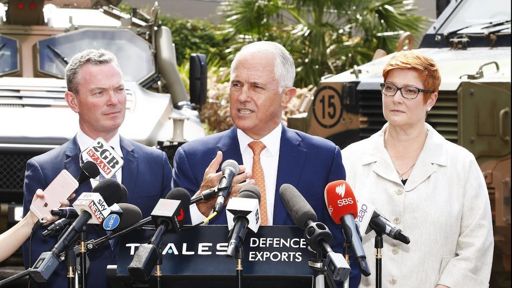 The Turnbull Government’s plan to give weapons manufacturers $3.8 billions of taxpayers’ funds is being blasted by workers involved in the Don’t Buy Into War campaign.

Peace and Justice is Union Business, which includes unions and rank-and-file union members, says offering government support for the arms industry so soon after withdrawing support for domestic auto manufacturing is a cruel joke.

“Apparently government support isn’t allowed for the thousands of workers who relied on work up and down the production line at Holden, Ford and Toyota – but according to Malcolm Turnbull it’s perfectly fine to dole out the dollars to these multinational corporations with no guarantee of jobs.”

“The Coalition said it wouldn’t pick winners. They said every industry must stand on its own two feet. Well, what  else  can  you  call  this  massive  handout?  I  can  tell  you  that  there  will  be  many  angry  former  auto manufacturing workers out there.”

Peace and Justice is Union Business spokesperson Shirley Winton says public money should be spent on health, education and creating sustainable jobs instead.

“$3.8 billion would go a long way in our schools, hospitals and TAFEs. Our government should be creating sustainable jobs that add to the knowledge, health and wellbeing of our people – not to support the production of death machines.”

“It’s a complete fallacy that there will be sustainable, long-term jobs in making weapons of war. The war profiteers will be here as long as they smell public money, then they’ll take off – leaving our communities to pick up the pieces.”

“We know exactly where the bulk of this money will go – to the international weapons manufacturers and
their foreign shareholders.”

“This is a federal government without an iota of ambition for our people. Australia could be leading the world in renewable energy, on finding cures to diseases; but instead their vision for the future of work is of our kids churning out deadly bombs and machine guns for US warmongers and their allies.”

“Australia can do better than being yet another arms dealer to nations addicted to death.”