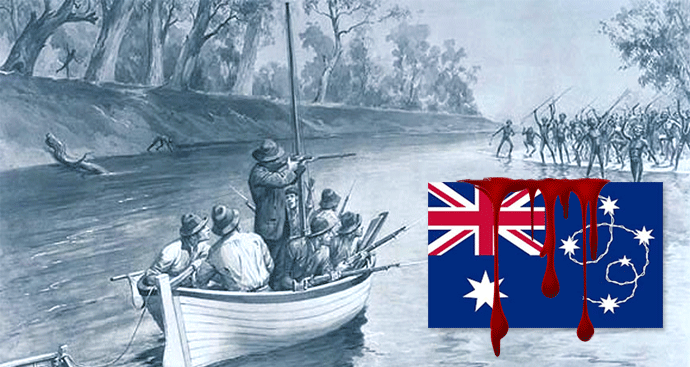 The background image symbolizes the battles to protect ‘country’ throughout the first two hundred years, and the Australian flag symbolizes the ongoing genocide and gross abuses towards First Nations and Peoples by the occupying power – Background image from ‘Sturt’s party at the junction of the Murray and Darling, 1830’ (National Library of Australia)

By Ghillar, Michael Anderson, Convenor of the Sovereign Union, last surviving member of the founding four of the Aboriginal Embassy and Head of State of the Euahlayi Peoples Republic.

I welcome the debate raging over Invasion Day v Australia Day. Truth must prevail. The bottom line is there is nothing to celebrate (not even for the non-Aboriginal majority) because Australia is not an independent Nation.

Unlike most other Nations around the world there is no day when Australia can identify it was given its independent status free of the sovereignty of the British Crown with a new constitution. There has been no day when Australia decolonised so that there is no longer a constitutional obligation for the British Crown (that is the Queen and/or her agents, the Governor-General and Governors) to place their signatures on legislations passed by the parliaments and thereby assent and make them legal. The Governor-General is still Commander-in-chief of the army, navy and air force.

Let me turn quickly to the question of land. If all persons who have title to land pull their title deeds out of the cupboards, banks or wherever they are they will see that in those title deeds they do not own the land legally because the documents actually say they are tenants in common with the Crown of England. It is not true that they have full entitlement and ownership of that land, because Australia’s land grab is based on an ancient feudal land system. 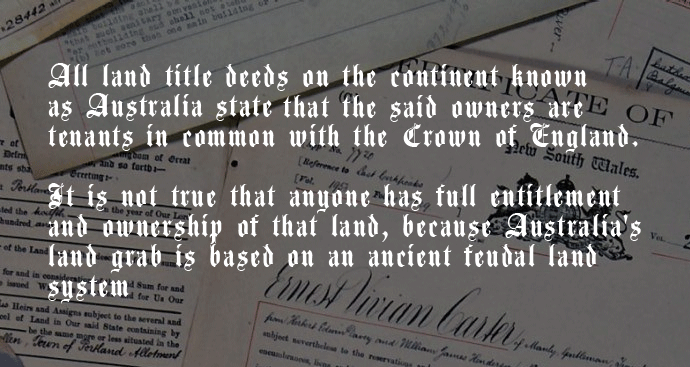 Even the High Court in Joosse v ASIC 1998 Justice Hayne could not identify a single day that Australia could celebrate as a true day of liberation from the British Crown.

“Australia attained international recognition of its independent and sovereign identity when it signed the Treaty of Versailles or when it became a founding member of the International Labor Organisation. Yet treaties made by Australia, including in particular the arrangements reflected in the Statute of Westminster Adoption Act 1942 (Cth), were not registered as international arrangements as was required by those parts of the Treaty of Versailles establishing the League of Nations. Again this is said to lead in some unspecified way to the invalidating of some legislation.”

We do need a day when our First Nations people and the rest can truly celebrate an historic occasion.

It is illegal under international law to celebrate genocide.

Here the situation is different from the African colonial experiences I refer to in Uniting Understanding where the British negotiated trade treaties and used them to falsely represent a legal claim to sovereignty over their territories, but failed. 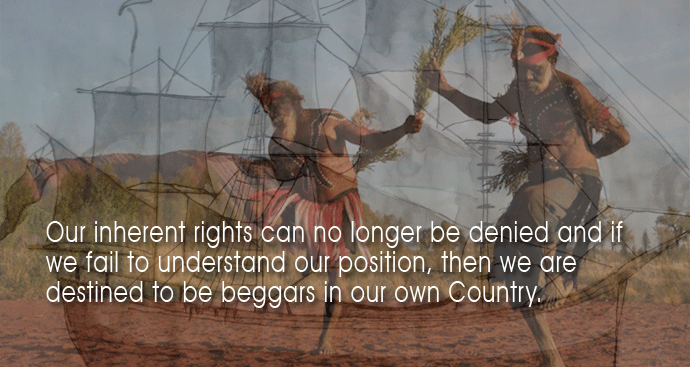 In our case here the British established a perimeter for their penal colony entitled the Limit of Location. It was members of the British aristocracy and business people who went beyond the Limit of Location and invaded our lands. The efforts of these rich aristocrats and those opportunists hungry for land who misused the Crown’s assertion of sovereignty over the land.

The 26 January 1788 is the day when the British formally announced their intention to take the land and resettle their criminals within the Limit of Location. Phillip’s role was to establish a prison system on our lands.

British documents evidence the fact the British authorities never intended for their criminals to ever return to their own country(s). This became a full scale invasion and occupation of our lands.

If we are to take a long hard look at the convicts, we will see that most of them in reality were political prisoners from Scotland and Ireland, with a mix of common thieves who stole for survival out of sheer necessity. 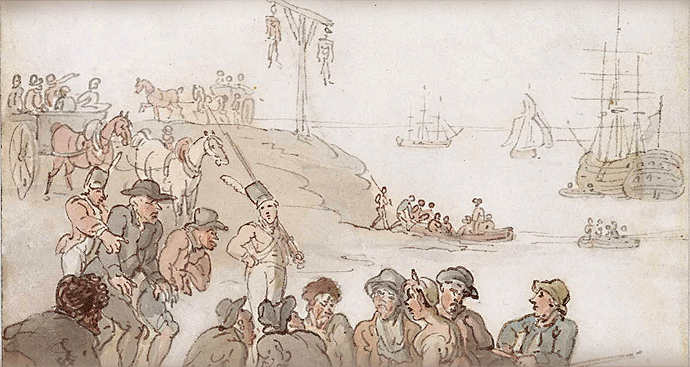 On 26 January 1938, the 150th anniversary of the First Fleet’s arrival, the New South Wales Government officials rounded up some Aboriginal people at the Brewarrina Government Mission Station (members of my family and other Countrymen) and without their consent brought them to Sydney to participate in a cruel Re-enactment of the Landing at Sydney Cove. The relucant Aboriginal participants were not housed in hotels, but rather were housed and fed in the lock-up cells beneath the Darlinghurst courts for 3-4 days. They did not have the opportunity to mix with the whites and others for a drink, or a barbeque.
http://www.youtube.com/watch?v=BfoDVq2LeNs
No, they were brought to Sydney Cove/Farm Cove to do their thing and then were taken back to their cells. No one has explained what happen after that. All we are told was that they were accompanied by the manager of the Brewarrina Mission Station and taken home the same way they came to Sydney, on the train under guard.

When we view the footage of the re-enactment from John Pilger’s documentary Secret Country we do NOT see any confrontations between the local ‘native’ people of Port Jackson and Phillip’s invading group of armed marines.

This historical untruth is deeply embedded in contemporary white Australian tradition and belief systems. The reality is Phillip was confronted with a strong resistance and complained back to England later that the ‘natives’ were more numerous than anticipated. He instilled terror in the locals by instructing Watkin Tench to kill 40 and take their heads. When Phillip ran low on ammunition it was about this time that there a smallpox outbreak amongst Cammarraygael on the opposite side of the harbour from Sydney Cove.
http://www.youtube.com/watch?v=ZDQtUeTIHho
Australian is still a country in total denial of its genocidal past and its racist and genocidal policies of today.

How do we come to these conclusions? Easy, Australia is a country that:

1. does not have its OWN Sovereignty because it rules and governs in ‘Right of the British Crown’ and it is the British Crown that holds an illegal sovereign claim to this country;
2. is condemned by the UN for its racist policies and is still on the CERD’s ‘early warning and urgent action’ procedure;
3. is an autocracy based on its own Constitution. [Autocracy is a form of government where the monarch is unlimited by law. The autocrat has uncontrolled and undisputed authority. Its power is maintained through military or police power.];
4. can never have a legitimate right to become an independent self-governing Nation in its own right without the resetting of relations with the Sovereign First Nations Peoples. 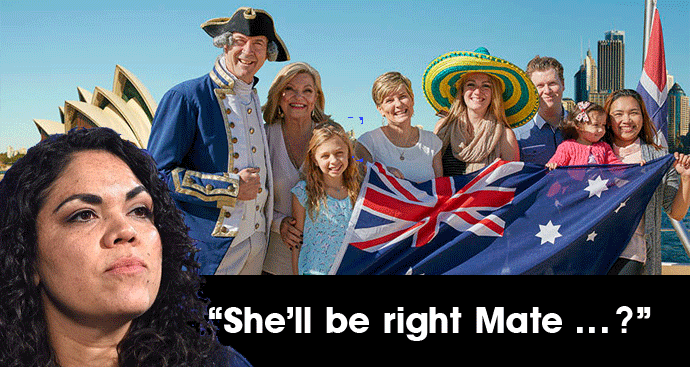 The promotion and funding of Australia Day events are criminal. Australians of today celebrate a day they know nothing about or have little understanding of. But then again the Australian style is to ‘Not give a Damn’ because ‘she’ll be right mate’ and ‘to hell with the rest’. These are the some of the main customary practices of the Australian culture as we know them today.

Unfortunately, new Australians have learnt very well. Don’t get involved in past history, because the situation they come from was so bad that they are grateful for just being here. But, on the other hand, I don’t think they have the courage to think or ask otherwise because they know Australia is a ruthless country; the majority of newcomers realise this fact and do not dare to question, but instead are thankful that they were permitted to immigrate here in the first place.

Australia Day/Invasion Day is a jaunt for most people. Another thing Australian custom dictates is to get a freebee whenever and wherever possible and don’t ask questions, just get drunk and accept the delights on offer and ‘f….’ the rest.

The attached video clip is a brief demonstration of an absolute lie perpetrated in 1938. At least in 1988 our people protested so much that there was no Re-enactment of the Landing for the Bicentenary, but the Tall Ships in Sydney Harbour were still celebrated. I guess this must be the starting point for all those who now call themselves Australian. ‘Get it Right’. They must understand that Australia is an occupied land where the true land owners are demonised and information about us (e.g. that we are lazy and live off welfare by choice) is false. 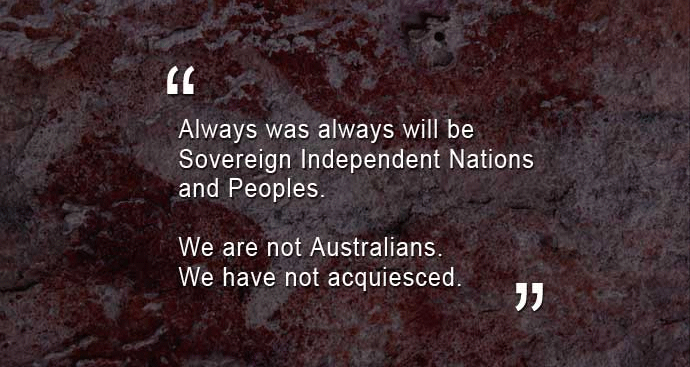 I am not an Australian, I am a Euahlayi/Gomeroi Dthane (Man)

Australia must change and we must lead this change.

Gradually the truth of our complex wise culture is filtering through. The myth of the aimless wanderings of the hunter-gathers is steadily being replaced by an understanding of our highly evolved Law, society and agricultural methods, which operate in harmony with this ancient land and extreme climates. Our methods avoided monoculture and maintained biodiversity – and still do.

The men who wrote the Constitution of Australia gathered in Melbourne from across the continent (colonies). They all shared a vision of one white Australian nation.