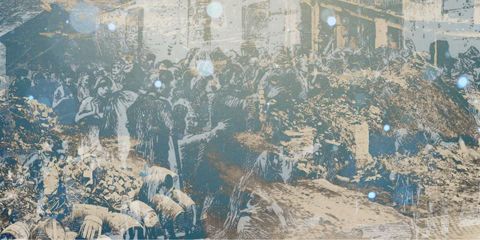 Spirit of Eureka’s Lindy Nolan addressed the Historical Materialism Conference at Sydney University in December 2017. The annual conference brings together academics and others critiquing capitalism. Much of the conference is highly theoretical, and has an international focus. Lindy targeted Australia, specifically the divisive role of the Business Council of Australia in Aboriginal communities. She covered both material from her book ‘Driving Disunity’, her comments (already on our website) at the Sydney and Adelaide launches of the book and more recent research. Her newer material especially on corporate efforts to construct a human face for capitalism, linked to sections from the book, is covered below.

Lindy Nolan told the conference why the BCA was key to corporate policy in Australia, “Peak organisations, representing different industry sectors, or geographical locations, work with the BCA. Founded in 1983, to create a union for corporations, the BCA gradually planned, systemised and policed an overall ruling class position here, supplanting the still important ruling class glue of interlocking directorships, attendance at elitist schools and membership of various elitist clubs.

Lindy repeated the characterisation by a Victorian Elder, of corporate operations with Indigenous individuals as ‘grooming’. “The BCA’s extremely talented people – 965 of them working on Indigenous engagement activity, doing nearly 80,000 pro bone hours with Aboriginal organisations and communities – are as critical as the money, if not more-so, because they create relationships,” she said, though it wasn’t that they were bad people, but rather that they saw “the corporate way as the only way”.

From the 1960s onwards, the disregard, racism and exploitation of Aboriginal Peoples and their lands, particularly by mining companies, shocked Australians.  Their attempts to create “a human face for capitalism” was designed to change this perception.

Lindy told her mostly youthful audience to remember the name Hugh Morgan, Western Mining Corp chief and President of the Mining Industry Council in 1984, “He didn’t help the corporate cause when he pontificated, ‘For a Christian Aborigine, land rights or the proposed Heritage Protection Act is a symbolic step back to the world of paganism, superstition, fear and darkness.’ According to the Sydney Morning Herald, ‘He then equated mining with godliness (which sparked a war of words with the Anglican church) and suggested that any Aboriginal rights to land had been forfeited by past practices of “infanticide, cannibalism and cruel initiation”’.

Lindy reported that the flak threatened profits and that Morgan is now a convert to what she ironically labelled ‘the human face project’.

She stated, “Morgan’s shit hit the fan soon after the BCA was founded. There was some cleaning up to do.” She spoke of the million strong walks for reconciliation in 2000, which made the task more urgent for corporations. She highlighted the particular role of strategic planning multinational, Boston Consulting Group, at the earliest stage of the new strategy, particularly a meeting with Noel Pearson in 2000.  “An Aboriginal fella who’s worked closely with Boston Consulting in Cape York told me it’s particularly ruthless, and never takes a step back,” Lindy said.

“The BCA’s new vehicles and multi-pronged approach took some years to develop, but now its Business Indigenous Network meets at least four times a year. Membership fluctuates, and in 2017 it has 64 corporate members, coming together, as far as I can ascertain, behind closed doors, ensuring a unified class approach. They constantly discuss tactics.”

Aboriginal voices fight to be heard

She spoke briefly about the Garma Festival. “Sponsored by corporations including Rio Tinto, like the BCA it started a year after Pearson and BCG’s meeting, on Yolngu lands, lands fixed in Australian people’s minds for land rights battles, and for the 1991 anthem Treaty! Great PR! Yet treaty wasn’t the business the corporations wanted to go with. Nor was sovereignty. Alongside the prohibitive cost of attendance, Garma is flooded with corporate whitefellas, with BCA members holding court at the Key Forum on Corporate Australia and Indigenous Economic Development, on Constitutional Recognition.

“According to Aboriginal organisation, Sovereign Union, in 1998 fierce constitutional defender, Samuel Griffith Society, advised PM John Howard that Australia’s sovereignty, particularly over mineral resources, was under threat from Aboriginal Nations and their Peoples.

“The Society, is one of four single issue advocacy groups set up with the close involvement of now deceased Western Mining Corporation political operative, Ray Evans. The other groups are the anti-union H.R. Nicholls Society, the climate change denialist Lavoisier Group and the now defunct Bennelong Society, which opposed land rights and Mabo, and supported assimilation. Western Mining was an active BCA member, and Evans’ boss, Hugh Morgan, was BCA President for several years, until the company’s takeover by BHP Billiton in 2005.

“Morgan, a very good mate of John Howard, was the main conduit for the Society’s concerns. Constitutional recognition, which could legally breach unceded sovereignty through a preamble, was Howard’s solution.

“Recognise was created as a mass organisation, with BCA propulsion, so it didn’t look like a politician’s policy. Eventually there were 300,000 organisational and individual supporters, but the BCA’s people were tightly organised within it. It was governed by Reconciliation Australia’s Board. Former BCA Deputy Chief Melinda Cilento, was simultaneously co-chair of Reconciliation Australia and Woodside Petroleum’s board through the James Price Point gas hub dispute that left the Broome region’s Aboriginal Peoples bitterly divided.

“Suddenly, Treaty and sovereignty had to fight to be heard, above the hundreds of millions spent promoting recognition. It immediately excluded anyone who thought parliamentarians should swear allegiance to the people, not the British queen, who wanted a genuinely independent country, who saw the Constitution as the invader’s document. Only Native Title, has been more divisive” in Aboriginal communities, she said.

“Noel Pearson was a Recognise and Referendum Council’s star. Yet grassroots’ Peoples and their leaders were locked out if they challenged recognition. The police were called to remove Lidia Thorpe, now the first Aboriginal parliamentarian in Victoria, from a meeting. Yet grassroots’ determination for Treaty and sovereignty could not be silenced,” she said.

“Corporations moved in behind Uphold and Recognise, which Pearson praised on the post-Uluru Q&A. Its founder Julian Leeser, was Samuel Griffith Society conference convenor for years, and remains its vice president. Uphold and Recognise Chairperson, Sean Gordon is CEO of Darkinjung Local Land Council.”

“Once land is gone, it’s gone”

She then reiterated and updated information about the Business Council’s support of Darkinjung. “Darkinjung is the biggest property developer on the NSW Central Coast and was named 2013 Aboriginal Organisation of the Year. Three years later its land ownership had increased by 500%. Sean Gordon is a current nominee for Australian of the Year.

“Aboriginal Elders speak of the land ‘their mother’.  Now they can sell their land to provide their economic future. This is the core of the Darkinjung path, mapped by the BCA.

“Darkinjung speaks of parcels of land, property portfolios, under the headline, ‘Our land is our asset base’.”

Lindy said, “Aboriginal Peoples have a right to be able to live well utilising their lands. But once land’s gone, it’s gone.

“BCA organisation, Jawun brings many secondees to work with Aboriginal leaders. Among many others, three came from Westpac to ensure environmental caveats were removed from land Darkinjung was blocked from exploiting. Once NSW law was changed, another Westpac secondee created an ‘economic development framework’ and training manual, shared with all 119 NSW Local Aboriginal Land Councils to spread the word.

“No wonder Sean Gordon speaks of corporations ‘driving change into the future’. Their hands are on the wheel,” she said, quoting her book.

Lindy emphasised that she had no right to condemn any Aboriginal People, “How would react if I, my friends, family, neighbours, workmates lived with over two centuries of cumulative, ongoing devastation and traumatic stress, and the richest and most powerful forces in the country suddenly offered help? Aboriginal and Torres Strait Islanders will deal with their own people. They don’t need my two-bob’s worth.

“However, the battle cry of sovereignty has not been silenced down the years. Historical materialists in this country, must take it into deep account. The capitalist class certainly does,” she concluded.