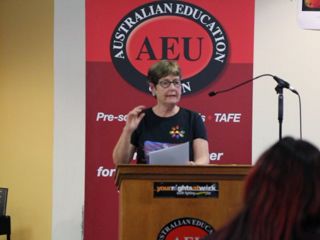 I acknowledge that we meet on Sovereign Kaurna land, and pay respect to Elders, past present and future, and all Aboriginal People present. A huge thank you to Danny and the Aboriginal Education Committee, to John Hartley for his powerful speech and to Spirit of Eureka, especially Mike Willis.

This is an accidental book. It wasn’t one until a draft circulating amongst Aboriginal Peoples, was too big to staple. Noel Pearson and corporate education was my initial investigation, but remains unwritten, by me at least.  What I found instead floored me. I’ve been writing about the Business Council of Australia for years, and here was the BCA with huge, long-term plans being rolled out into Aboriginal and Torres Strait Islander communities. And I’d known next to nothing about it. But Aboriginal voices, like Gary Foley’s, were saying “Someone ought to look at what corporations are up to!”  Land is what corporations are after, and they’re using people to people contact to rewrite their own story, as the good guys.

My 600-word article was called “A new architecture for Aboriginal Affairs”. Later, with leftover material, re-checking sources, I googled the title, and all that came up was my piece. The phrases’ source had disappeared.

‘A new architecture’ now read ‘an innovative new model of administration’… ‘A group of BCA companies has been working closely with Aboriginal leaders across eight regions to develop an innovative new model for the administration of Indigenous affairs. The Empowered Communities model proposes restructuring current arrangements to give Indigenous communities with proven and legitimate governance more power to determine priorities and funding.’

Never mind that Aboriginal Peoples still had to ‘prove’ and ‘legitimise’ themselves.

But “architecture” was key evidence of the BCA structure, and their detailed plans, being aggressively rolled out, now supposedly driven by Aboriginal and Torres Strait Islander Peoples.  I told a friend. “Lindy,” he said. “You know what the BCA is. Do you think they don’t keep track of what’s said about them?”

I have a pretty fair idea what the BCA is. Apart from Mike Willis’s informative preface and a Marcia Langton quote, the book opens like this: “The Business Council of Australia is the executive body of corporate power in Australia. It sets agendas and systematically applies the vast resources of its corporate members to implement them.” Then comes Michael Rose, former head of a BCA corporate law firm Allens, who spent recent years running around with Recognise and the Referendum Council, who says ‘The hundred businesses that make the Business Council of Australia, the largest hundred companies in Australia, have extraordinary influence in the way in which they have discussions with government, but also in the way in which they have discussions with their employees. They employ millions and millions of people. And they can, if they decide to support, for example, constitutional recognition, start to shift the discussion in relation to recognition, shift the discussion in relation to reform.’ And they did, with hundreds of millions spent, usually by Governments. (By the way, Rose wasn’t exaggerating. In 2015, Allens’ clients included 55 of the world’s top 100 companies.)

Rose is a nice person. So is BCA Chief Jennifer Westacott. Her sister is a great Teachers Federation organiser. The sisters grew up in public housing. But Rose and Westacott believe the corporate way is the only way. Their stories and humble demeanour help give organised corporate power, capitalism, a human face.

But why do I distrust corporations?

War best illustrates what they do in their compulsive hunt for super profits. 94% of Australians opposed the US led war on Iraq without UN sanction. Yet our “democracy” marched in. It was clear what would happen: Iraq splintered, a training ground for terrorists created, misery spreading across the Middle East along once minor fault lines between Muslims and secularists, or within Islam itself, split asunder by conflict. Disunity at its most horrific. Raytheon, Halliburton, Boeing and all the weapons corporations reaping untold ongoing billions, no end in sight, growing exponentially. So seeing corporate reps busily at work in First Nations’ communities, saying “Corporations only prosper when the communities where we operate prosper” and asking now pretty discredited governments “to step aside” after stuffing things up and let the corporate saviours in, I smelled a rat.

In Driving Disunity I try to explain what they’re doing, how they’re doing it, and why. 230 years of government policies have supported the invaders against Aboriginal and Torres Strait Islander Peoples, an undeclared war. Suppression served the British and eventually their corporate inheritors well.

But corporations, overwhelmingly backed by governments, ran into trouble when land rights exploded, exposing reality to more and more Australians. In 1988 the largest gathering of Aboriginal and Torres Strait Islander Peoples in this continent’s 60,000-year history marched from Redfern on January 26. By the year 2000, a million mainstream Australians were marching in support. That’s big. That’s trouble for corporations. That year, 2000, marks the birth of a plan, by the BCA, to systematically create that new architecture of Aboriginal affairs, which this book identifies as divide and conquer. There are winners in that process. Some of the programs are much needed. But there are losers. And land is still the battleground, with massive tracts held by Aboriginal Peoples.

Near Sydney, Darkinjung LALC, is a developer claiming and selling land. “Our land is our asset base”, their headline reads. I don’t point the finger –  not up to me. But once land’s gone, it’s gone. A Victorian Elder, used the word “grooming” to describe the way corporations operate with Indigenous individuals.

Garma Festival is a launching pad for the BCA’s agenda, where corporate leaders sing in chorus, the same phrases, the same key points. There’s outcomes they want, and they zero in. KPMG’s Peter Nash describes this, “Corporations begin with the end in mind”. And there was a specific beginning 17 years ago, a meeting including Noel Pearson and Boston Consulting Group – one of the world’s big three strategic corporate and government planners.

I was on the Teachers Federation Executive, when a Boston Consulting Group plan fell off the back of a truck. The Group’s plan for the NSW Labor Government divided the state system into stand-alone schools, and advised to sell the plan with short-term extra funding. The incoming Coalition Government’s ‘Local Schools Local Decisions’, followed the BCG’s strategy to a T, and we went on strike.

Why was their voice so muted on the Intervention?

Why did they not speak up in 2014 when 400 homelands were slated for closure. Gina Rinehart’s Australians for Northern Development and Economic Vision and its “voice for the north”, established the year before was strangely silent. In No Sugar, Nyoongar playwright Jack Davis retold history as he heard and lived it. Billy Kimberly, a conflicted character worthy of Shakespeare, recounts the massacre of his people at Oombulgarri in 1926. It never failed to shock and silence my Drama students.  The first homeland demolished in WA was Oombulgarri…The new terre nullius. Why speak up? Perhaps the BCA did and I missed it. Their outrage certainly didn’t splash across our screens with huge fanfare given to Twiggy’s good deeds or favoured Aboriginal leaders.  Empty lands are easier to exploit.

Truth is important, and complex. On the BCA side, I checked, double-checked and re-checked facts, but the role of the Samuel Griffith Society, set up by mining executives, in Howard’s promotion of constitutional recognition is overstated. Uphold and Recognise, which Pearson praised on the post-Uluru Q&A is more subtle than the Samuel Griffith Society, but founder Julian Leeser, was Society conference convenor for years, and remains its vice president.

I’m indebted to Marlene Hodder from Alice Springs, for correcting errors about the Intervention, apart from those I noticed after publication. The abusive sexual health checks did not continue, after both Aboriginal families and doctors refused to cooperate. In another section, first fleet days, Bennelong’s kidnapping is omitted and despite involvement in a later incident, Bennelong didn’t spear his mentor Governor Phillip.

The e-book, available on Spirit of Eureka’s website, has corrections. Finally, I tried not to stray into judgements on people that are internal blackfella business.

Thanks for listening. I hope the book raises questions and ideas you can share, including with me. I want to learn. I live in love, safety, comfort and community on stolen Aboriginal land, a beneficiary of an ongoing, often hidden holocaust. This book is my first real attempt to pay a bit of rent. Always was, always will be, Aboriginal land.