War, Peace and Independence – Keep Australia Out of U.S. wars 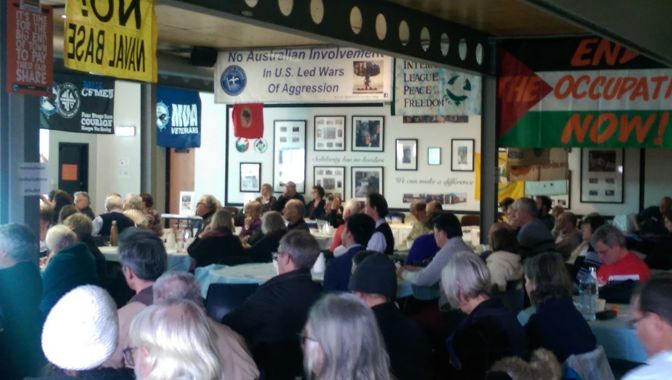 By everyone’s estimate the 2017 IPAN conference was a big success in strengthening and lifting the call for Australia’s independence from U.S., for an independent Australian foreign policy and removing Australia from U.S. led wars.  The conference took a further step in building a broad based anti-war mass movement targeting U.S. global military aggressions, campaigning against U.S. bases and troops in Australia, and de-coupling Australia from U.S. military alliance.

The 230 years long struggles by Australia’s First People were passionately conveyed by Lidia Thorpe and her sister, a member of Warriors of Aboriginal Resistance.

The conference expressed international solidarity with speakers from Korea, the Philippines and the indigenous people of Diego Garcia, who were forcibly evicted from their island to make way for the U.S. military base in the Indian Ocean.

One of the outstanding features of the Conference was the wide range of organisations attending the 2 and a half day conference – faith organisations, different peace groups, community organisations campaigning for more public funding to meet community needs, unions, academics, lawyers, journalists and workers.

The Maritime Union of Australia had a strong contingent at the conference with delegations attending from Sydney, Port Kembla and Victorian branches. Representatives and members from other unions included ETU, NTEU, CFMEU.  The MUA’s support in particular was enormous and IPAN is indebted to the union and its members.

Many speakers expressed concerns with the integration of Australian foreign policies, defence industries and capabilities into U.S. global military agendas and supporting U.S. wars. Many stressed that now is the time to promote widely and stronger the call for an independent foreign policy and build a broad and united people’s movement for peace and independence from U.S.

Many speakers stressed this is an important and urgent time to promote an independent foreign policy widely and build a broad and united people’s movement for peace and independence from U.S.

The success and interest in the Conference and IPAN reflected the growing public concerns with Australia’s subservience to U.S. global military agendas and the dangers of hosting U.S. bases and the drones program in Australia.

The conference took place at a time of increasing U.S. belligerence and provocations on the Korean Peninsula and the build up of U.S. military on the Peninsula, including the DHATT system and joint military exercises.

All speakers’ talks were informative, evidence based and inspired many to join the struggle.

Close to 200 people attended the conference over the weekend.

Conference participants came from around Victoria, Qld, Alice Springs, NSW, South Australia, Canberra, Tasmania and West Australia.  It was a truly national conference with representatives from every state/territory.

Amongst the outstanding speakers two were of particular note:

Sung Hee Choi – peace activist from South Korea and Jeju island spoke passionately and eloquently on the history of U.S. military domination of South Korea and called for the immediate removal of DHAAT system, all U.S. bases and troops from South Korea and  an end to joint military exercises and for U.S. to get out of Korea.  She argued strongly argued for the reunification of Korea. Sung Hee Choi’s presentation were warmly received with the conference unanimously passing a resolution below calling on the U.S. to first remove the DHAAT system and stop joint military exercises

Warren Smith – MUA National Assistant Secretary delivered a passionate and powerful speech on why the struggle against imperialism and for peace and justice are the core of working class struggles.

All speakers’ speeches can be listened to on IPAN’s website,  http://ipan.org.au/conf2017aud io

Thanks to all the participants who promoted the conference to their contacts and networks, attended and helped during the weekend. 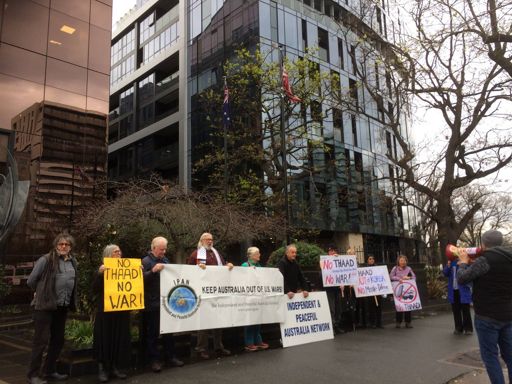 The conference concluded with a protest outside the U.S. Consulate in Melbourne on Tuesday 12 September, calling on the U.S. to remove the DHAAT “defence” system and get out of Korea.

This IPAN National conference is taking place on the traditional lands of the Wurundjeri people.   We acknowledge this country was violently seized from the First People 230 years ago.  We pay our respects to their long struggle for justice and self-determination.  We affirm that true independence cannot be achieved without a just and sovereign Treaty with the Indigenous people of this land.

We have a vision of an Australia that plays a positive and independent role in building peace in our region and beyond through peaceful resolution of international conflicts.

We believe the integration of Australia’s military facilities, defence forces and our foreign policies into U.S. military agendas threaten our sovereignty and security and contributes to global wars.

We believe that the continuing operations of U.S. military bases in Australia, the joint military exercises in North Queensland and the stationing of US marines in Darwin are a threat to the security, safety and sovereignty of the Australian people and integral to U.S. global wars.

We believe Australia can be self-reliant in its ability to safeguard our security and sovereignty.  The Australian people have the skills, knowledge and creativity to design and build our own self-defence industries and strategies, and do not need to depend on any big powers.

We uphold the Australian people’s aspirations for global peace and security and call for an end to escalating militarisation of the world.  We stand in solidarity with the people of Korea, the Philippines, Japan, Guam, and many other countries in Europe and Latin America campaigning against wars of aggression, foreign military bases and troops, and for peace, justice and sovereignty.

In moving towards an independent and peaceful Australian foreign policy:

This Conference welcomes the trade unions’ involvement in the broad people’s movement for peace and independence.  Australian unions have always been at the forefront of campaigns for peace and against wars of aggression.

This Conference calls for building and mobilising a broad united people’s movement against wars of aggression and nuclear weapons; for peace and an independent Australian foreign policy.

Resolution on the Korean Peninsula

This Conference calls on the Australian government to withdraw from joint military exercises in South Korea and work for a peaceful resolution of the conflict on the Korean Peninsula.

To realise a Peace Treaty in the Korean Peninsula requires the following efforts from each side:-

South Korea and the United States should stop all war exercises, refrain from deploying nuclear weapons in South Korea and work for a peace agreement with North Korea.

For its’ part, North Korea should respond by stopping nuclear and missile tests.

Resolution on the Philippines

Whereas a vibrant, inclusive and just social order where human rights and dignity are respected is the best defence against all forms of terrorism employing violence and fear to cower a people; and

Whereas, true peace based on justice can only be realised through building up a just society and not by the way of violence, war and terror; and

Whereas, Philippine President Rodrigo Duterte has promoted extra-judicial killings, violence, and direct attacks on human rights and the defenders of a justice, continuing a bloody heritage of Philippine Presidents and traditional clan based politicians; and

Whereas the Armed Forces of the Philippines (AFP) and the Philippine National Police (PNP) have over the decades used violence and fear to attack human rights and communities promoting justice and genuine development; and

Whereas vast amounts of Australian military aid, and training of Philippine military and police have only increased the violent and anti-democratic nature of the AFP and PNP, and

Whereas Australian assistance and cooperation should be non-military and directed towards building up just and inclusive societies respecting the rule of law and human dignity as the best answer to hate, terror and conflict

WE, the participants of the Independent & Peaceful Australia Network [IPAN] National Conference, 8 – 10 September  2017 in Melbourne, affirm our commitment to justice and peace in the Philippines over violence, hatred and war, and call on the Australian government to:

We call on the Australian government to support the inalienable right of the West Papuan people to independence from Indonesia, to peace and security.

This 2017 Conference of the Independent and Peaceful Australia Network send solidarity greetings to the activists currently blockading and opposing the DSEI Arms Trade Fair in London.

We are here in Melbourne to seek a peaceful and independent Australian foreign policy: commercialisation of war is a major impediment to this.

We stand with you in opposing this trade in death and destruction.