This article was a Spirit of Eureka leaflet handed out at the IPAN (Independent & Peaceful Australia Network) National Conference 2017 held in Melbourne, 8-10 September.

End the US Alliance – an independent, anti-imperialist foreign policy for Australia!

The former Prime Minister Kevin Rudd recently suggested that Australian defence should be bolstered by the purchase of a missile defence shield, in order to protect Australia from North Korean nuclear missiles.

The primary reason for the North Koreans building such weapons in the first place, is the threat they feel from the nuclear armed US.

The US continues to have approximately 28,500 military personnel stationed in South Korea at a cost to the South Korean government and people of some $880 million US dollars a year. They have occupied areas of South Korea ever since the Armistice was signed in 1953.

The threat that the North Korean state feels has been heightened in the last few months with Trump’s deployment of the Terminal High Altitude Area Defence (THAAD) missile shield in South Korea. The THAAD missile shield is viewed as provocative not only by the North Koreans, but also China and will only serve to increase their military spending and lead to the further nuclearisation of the region.

The THAAD missile shield is produced by one of the major US arms manufacturers, Lockheed Martin. It is firms like Lockheed Martin that form part of the ‘military industrial complex’ first spoken about by President Eisenhower in a 1961 speech. Lockheed Martin, Raytheon, Thales and BAE are major multinational weapons manufacturers already entrenched in the Australian defence industry.

The fact that critics have pointed out that anti-ballistic missile shields cannot knock out all missiles launched and are therefore flawed never deters proponents from spruiking the benefits of such overpriced weapons systems.

Such has been the special relationship between Australian and US governments since World War 2 that Australia has not only gone ‘all the way with LBJ’ during the Vietnam War era, but after 9/11, has followed the US into Afghanistan, Iraq and Libya. In the United Nations, Australia shadows the US, both conspicuously absent when 122 other countries endorsed the Nuclear Disarmament Treaty. The dutiful subservient and dependent ally has been the preferred role that Australian politicians from both mainstream parties have sought to fulfil vis-à-vis US imperialism. The current era of Turnbull is no exception. 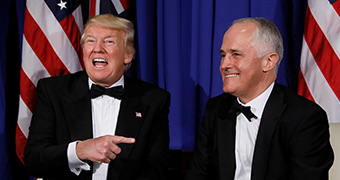 As it is, Australia hosts a number of so-called joint facilities such as Pine Gap, Kojarena and North West Cape as well as the thousands of US marines who deploy on rotation in the Northern Territory. These bases and the ‘interoperability’ of US and Australian military forces not only undermine Australian sovereignty and make Australia a ‘target’; they help to increase tensions in the region.

As Richard Tanter points out:

‘[E]ach of these [Pine Gap, Kojarena and North West Cape] critically important US facilities is capable of being used by the United States in war without Australian consent or control, effectively dragging Australia into war without choice – including nuclear war with China.’

The role of Pine Gap in particular, in providing targeting information for US drone strikes, means that Australia is complicit in any number of war crimes and illegal assassinations carried out in countries where Australia is not at war – Yemen, Somalia and Syria – and possibly the Philippines.

What the ANZUS alliance means for Australia is the constant erosion of Australian sovereignty and the likelihood of being drawn into further US wars of imperialist aggression.

Pulling out of the aggressive US military alliance, asserting Australia’s independence and sovereignty, and building peace and friendship with countries and people in our region will be the Australian people’s contribution to a more peaceful world.

We must fight for an independent and peaceful Australian foreign policy!

We must fight for the closure of all US bases in Australia!

There can be no peace without independence!