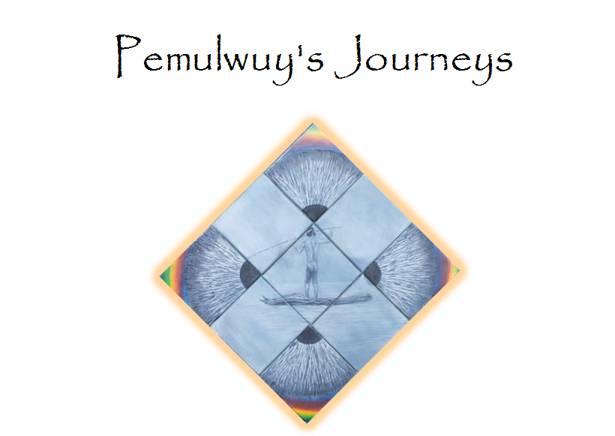 After discovering the story of Pemulwuy, Mick Sagan, a Sydney teacher,  painted scenes of this  black warrior journeys of resistance to British colonialism on his land.  Sagan understood Pemulwuy’s journeys were the pathways of his people’s, the Bidjigal, resistance to the theft of their land. Pemulwuy was a Bidjigal caradhy, a justice man, a clever man. His attacks on the British settlers were punishments for their violations of Bidjigal law.

Pemulwuy’s war began in 1790 with the spearing of Macintyre, the known killer of Bidjigal people. Sagan’s painting of Pemulwuy’s spear symbolises the beginning of his journey. Infuriated by Macintyre’s death, Governor Phillip sent a military expedition to either arrest Pemulwuy and any six Bidjigal or return with their heads. No redcoat could find him. Until his death, Pemulwuy and other black warriors carried out raids on settler’s farms, burning crops and killing livestock.

Sagan’s paintings depict this journey of black resistance. In one raid at Parramatta Pemulwuy was shot and wounded by British soldiers. Arrested, with buckshot in his head and body, Pemulwuy escaped from the prison infirmary. In November 1801, Governor King outlawed Pemulwuy, offerings a reward of 20 gallons of spirits or a free pardon for his capture, dead or alive.

Hunted down and showing no fear, unarmed Pemulwuy was shot dead and beheaded in 1802. His head was preserved in alcohol and sent to England as a gift for the botanist explorer, Sir Joseph Banks. Sagan did not paint this end to Pemulwuy’s journeys. His paintings depict the journeys of a black patriot whose journey of resistance is inspirational.

For most Australians he is unknown. I didn’t learn about him at school. It wasn’t until I read the Builders’ Labourers’ Songbook that I learned about this Eora leader, a Bidjigal born in Kamay (present day Botany Bay).

This exhibition will attempt to illustrate key events from Pemulwuy’s story of resistance to the British colonialists. He was able to travel the Eora lands with ease using canoes (noweys) along the water ways. From Botany Bay to Parramatta and Toongabbie in a matter of days he surprised the colonialists with his sudden appearance.

The time has come to recognise Pemulwuy widely as a patriot and hero who resisted invasion and the depredations of colonialism.

“Until recently (1987), Pemulwuy’s name has never appeared in white Australian history, yet his name lives on in the unpublished records of his enemies and the minds of Aboriginal-Australians”

“The name Pemulwuy means earth: man of the earth. He was born around 1756 and lived in the second half of the eighteenth century. He led the Eora in the first response to the British invasion and fought the British for twelve long years until his death in 1802. Pemulwuy’s history is part of the history of Australia.”

These are the names of ancient Sydney. They show the nations and places using Eric Wilmot’s spelling.

My aim would be to roll back the ugly colonial names and remember the original inhabitants.

Two notables are the Georges River and in particular Port Hacking which is named after Pemulwuy’s killer Henry Hacking – A peculiar example of nominative determinism. Restore the Tucoerah, Deerubban and Tubowgule. And Werrong or Warrane instead of Sydney! 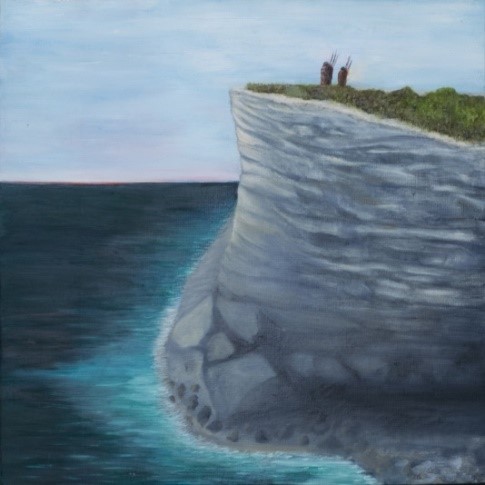 ‘Pemulwuy is clearly one of the first people we know about who actively resisted white settlement. We know that he caused the Government a     great deal of concern. He was listed as an outlaw. There was a price   put on his head. So perhaps as the first in the Sydney region, he has special importance.’ 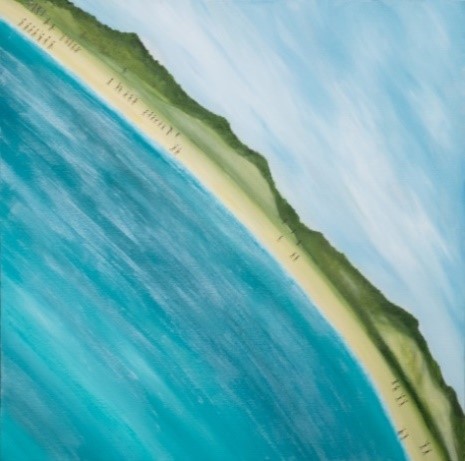 ‘Governor Phillip ordered Watkin Tench to lead a detachment of soldiers to Botany Bay. Tench was directed to put ten aborigines to death on the spot and capture two who would be publically executed at the settlement. Hatchets and bags would be supplied so that the heads of those killed could be cut off and brought back.’

‘Pemulwuy was a Bidjigal man. Bembul means earth; he had that name as a child. When he grew to be a man, he became Bembul Woyan. The earth and crow. And that’s what his name represents, the earth and the crow. And in all reality, intentions and purposes, if he was to return today, he might not recognise me as being part of his clan. You know, because he wasn’t very impressed with the mix of cultures. He preferred that we stayed within our own peoples.

Everyone was looking for Pemulwuy… 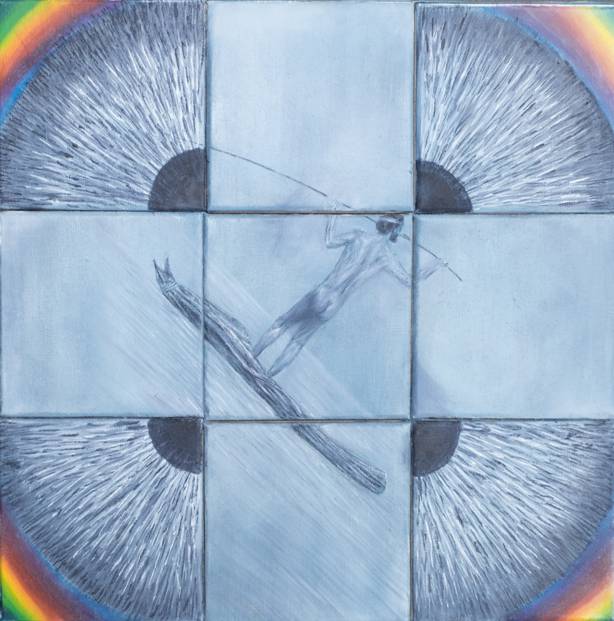 ‘They are to fire on any native or natives they see and if they can, pursue them with a chance of overtaking them. Every means is to be used to drive them off, either by shooting them or otherwise. ‘

Heading up the Deerubbun (Hawkesbury) 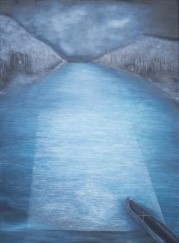 When the first farms were established along the Hawkesbury River, they dug out the yam beds and the yam beds were the staples of the local people along that part of the river. So they were immediately forced to try to find other sources of food and when they took the crops, the potatoes and the corn the settlers were growing, they were seen as stealing what was Europeans’ food and, indeed, it was Europeans’ food. It wasn’t theft from the point of view of the Dharuk people; it was simply taking a new food resource which was growing on what had been their traditional land.’ 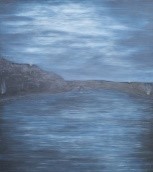 ‘He’d attacked settlements at Toongabbie and he came into Parramatta with approximately 100 men – it’s been suggested that he had 100 men with him. And taunted the soldiers to come and get him. I think it’s one of those situations where he felt that he couldn’t be harmed. He’d been shot at many times before and had always survived. On this particular occasion, many of his people were killed. There was a contingent of the military in Parramatta. So many of his warriors were killed, he was severely wounded and captured. And that, to a large extent, was the last major attack on a settlement as such. There were, later on, attacks on farms and isolated shepherds, but it was the last major attack on a settlement.’

‘The weapons on the British side were two things – diseases, introduced by the British, and the settlers, terribly determined to take this land And on Pemulwuy’s side, a remarkable weapon – fire. A weapon that this country had known since humans began here. And Pemulwuy used it as a weapon. And it was that weapon that did two things. First of all, it terrorised the British and forced them further and further back towards where they arrived at the harbour of Tu-bow-gule or Port Jackson as they call it. The second was it prevented them feeding themselves. If they tried to grow crops, Pemulwuy burnt them. If they tried to grow animals, cattle or, I suppose, sheep, eventually, he’d kill them. And presumably ate them. So it was a war, a strange sort of war, of attrition.’

He passed by here… 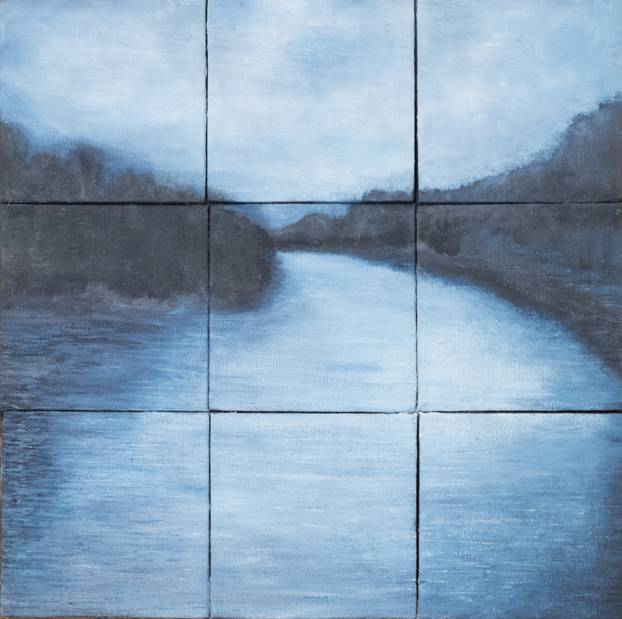 Pemulwuy travelled by nowey (canoe) along the Georges River, Salt Pan Creek, the Parramatta River and the Hawkesbury River.

Everyone knew whose spear it was…… 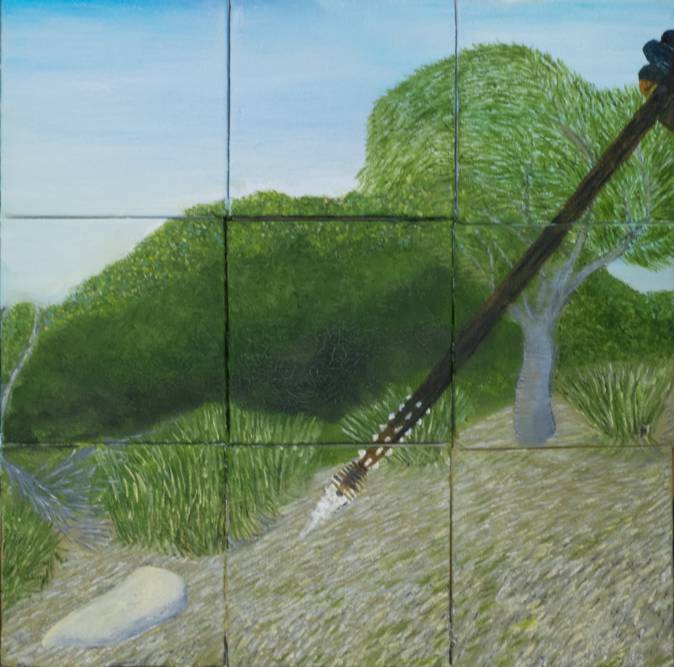 ‘When Colebee and other Eora visited the hospital that day they appeared to know already of the attack (on McIntyre) and accused Pemulwuy of being the spear thrower. They advised against withdrawing the spear. The weapon was a canniduil.’

‘He did that by spearing McIntyre with a death spear which was armed with two rows of barbs, stone barbs, and the idea of the death spear was that when the person was speared, when the spear shaft came out, the stones would stay inside so they’d break off and stay inside. And then, of course, over a period of time, the person who’d been speared would die.’