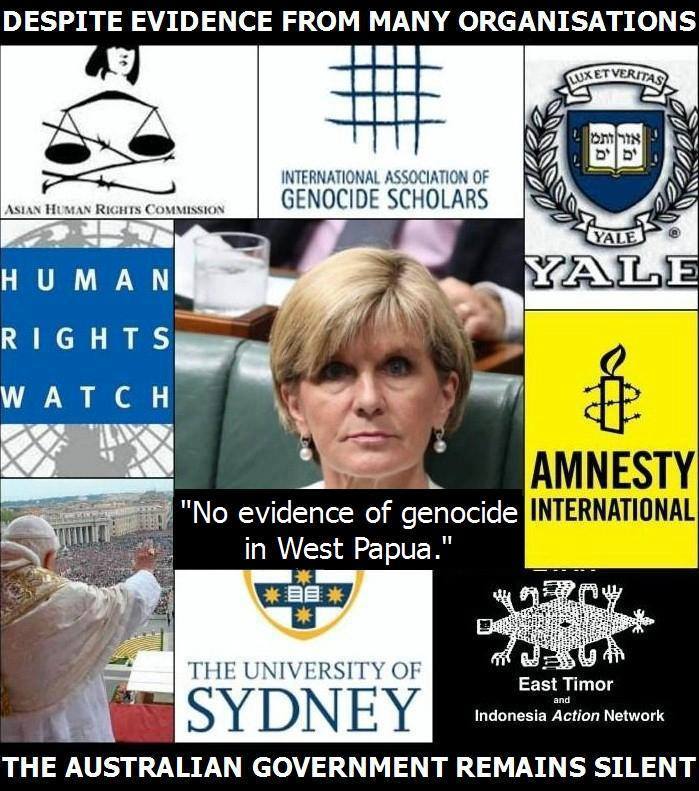 late last year Indonesia temporarily suspended all military co-operation with Australia after a member of the Indonesian Special Forces, known as Kopassus, saw ‘offensive training material’ at the Special Air Service base in Perth.

“All forms of co-operation have been suspended,” Indonesian military spokesman Major General Wuryanto reported to the international media.

The falling-out was sparked by a grievance in November from an Indonesian military officer who was on exchange in Perth to teach Indonesian to Australian special forces.

The grievance comprised the following:

However Australian Defence Minister Marise Payne, quickly came to the rescue and stated there would be a review of the offending materials. The Minister after discussions with the Indonesian Defence Minister Ryamizard, said that the issues would be resolved and that future areas of cooperation would continue.

Unfortunately the terror and atrocities that Indonesia military carries our regularly since the invasion of West Papua continue as testified by the Free West Papua Campaign/Australia Facebook pages. Australia needs to stop assisting the fascist Indonesian military.

The Australian government is publicly apologising to Indonesia over a poster when Indonesia has been torturing, raping, mutilating and murdering West Papuan people for 50 years. Australia should be taking the Issue of West Papua to the highest levels of the UN not helping Indonesia hide what they are doing.

The work of Australian funded and trained KOPASSUS in West Papua.

As reported by Radio New Zealand and West Papua Media amongst others. http://www.radionz.co.nz/…/human-rights-groups-say-victims-…

May 2013.
Disturbing reports are continuing to emerge from Tingginambut, Puncak Jaya, in the West Papuan highlands, detailing evidence of another violent rampage by the Indonesian army special forces (Kopassus) against civilians throughout May.

At least 18 headless, mutilated or amputated bodies have since been confirmed found in roadside ditches and drains, and named as victims from around the Mulia and Pirime areas of Tingginambut, with unconfirmed but credible reports putting the total toll of the “mysterious killings” at over 41 people to date.
Activists from the West Papua National Committee (KNPB) have said that the discovery of so many bodies points to “a covert operation of killing and forced disappearances of indigenous Papuans in Puncak Jaya that has been operating since 1 April 2013 until now”.

West Papuan human rights activists in Puncak Jaya have also reported that women in villages under occupation by the TNI are being regularly raped by soldiers, with at least 12 documented cases since April and unconfirmed reports of many more. Two female high school students among the dead were found to have been brutally raped and beaten in Tingginambut by Kopassus officers.

According to statements from the West Papua National Committee (KNPB), a senior high-school aged youth of class III was arrested in the town area and is believed to have been tortured over a period of 2 weeks after which he was killed and beheaded, with his beheaded body placed in a sack and thrown under a bridge. His family is still hunting for his head, according the KNPB.

“Then victim number 6 is tortured until killed by inhumane way, gunshot victims by Kopassus and cut the legs and head off, and waste (dumped) in different places,” the witness reported
“we found the victims dead, they (perpetrators) had dismembered the head and feet and hands in different places, we gathered all of the victim’s body.” “Once we found them, we made a grave all in one place”

Yerson Wonda – the Secretary of KNPB in the Puncak Jaya region – and KNPB member and high school student Ella Enumbi were also arrested by Kopassus at Ilu TNI post, then killed and their bodies beheaded. The body of Yerson Wonda and the head only of Ella Enumbi were thrown under a bridge in a sack, and their bodies were found on 26 April 2013. KNPB News reported that “It is suspected that for two weeks following the date of their deaths that their bodies were hidden by Kopassus at the place of detention at the Kopassus Post at Purume (Pirime), Mulia.”

Australian Foreign Minister Julie Bishop claims she has seen no evidence of Genocide in West Papua. The Australian government is publicly apologising to Indonesia over a poster when Indonesia has been torturing, raping, mutilating and murdering West Papuan people for 50 years. Australia should be taking the Issue of West Papua to the highest levels of the UN not helping Indonesia hide what they are doing.

Australian Foreign Minister Julie Bishop claims she has seen no evidence of Genocide in West Papua. As Foreign Minister it is supposed to be her job to know everything about foreign affairs.

There is now several academic studies, some from Sydney University, documenting parts of the genocide committed by the Indonesian government against the West Papua people.

Please email or write to Julie Bishop and send her the following reports.

Report from Human Rights Watch about how Joko Widodo’s announcment to open West Papua to foreign journalists was in fact not true.

For a detailed analysis of the Act of free Choice and Indonesia’s illegal and fraudulent claim of sovereignty and territorial integrity over West Papua please read this study from the West Indian Law journal.
https://www.ilwp.org/…/West_Papua_and_the_right_to_self-det…