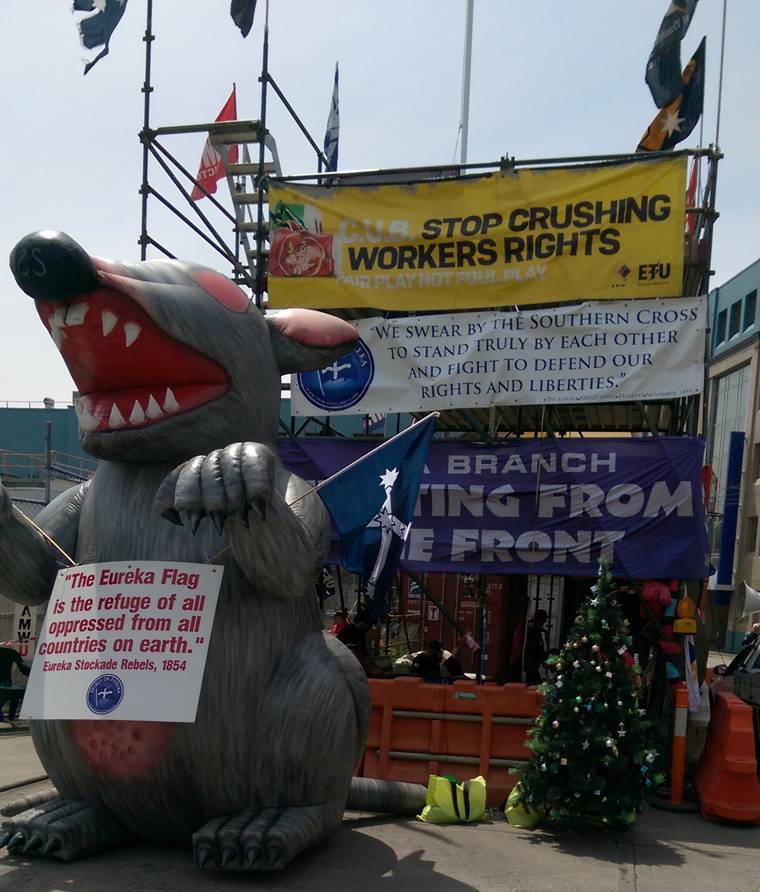 We acknowledge that we’re standing on the stolen land of the Wurundjeri people, the traditional custodians of this land.  We pay our respects to their elders past and present, and the long struggle for justice and sovereignty of this country’s First Nations people.

There’s no better place in Melbourne to commemorate this year’s 162 anniversary of the great Eureka Stockade rebellion, than here at this CUB brewery Abbotsford site of the long and difficult struggle by CUB 55 workers in their Battle of the Breweries.  We honour the 10,000 Eureka rebels, some of whom paid with their lives in the fight for justice and a fair go for all working people. And we pay tribute to the courageous and resolute CUB55 workers who are carrying Eureka’s fighting spirit for justice and fairness for all workers of this country.  The Eureka Stockade is an enduring and inspiring legacy of ordinary people’s struggles for justice, dignity and democratic rights.

In Nov and early December of 1854 thousands of gold miners near Ballarat rebelled against the brutal and oppressive British colonial government; they rebelled against government mining licence fees imposed on the impoverished miners, whilst the rich squatters and aristocrats paid no taxes – sounds familiar?  They rebelled against the extreme poverty, whilst the landed gentry and the rich raked in the wealth from diggers’ licences and the stolen Aboriginal land. They rebelled against the constant and violent police harassment, raids and abuse.  On 28 November, In a courageous and collective act of defiance and rebellion against oppression the rebels burned their licences, raised the Eureka flag and swore the oath of allegiance to each other and the flag.  They built the stockade to defend themselves and their flag and called for Australia’s independence from Britain.

In the early hours of 3 December the Stockade was brutally attacked and smashed by the combined forces of police and the army, but the legacy of the Eureka rebels’ spirit of collective defiance against injustice, and standing up for what is right, has not been defeated and lives in many struggles of ordinary people today.

The government, police and soldiers hunted the rebels, threw some into gaol where they were tortured and charged with treason.  But the overwhelming public support for the rebels cause and outrage at the army and police attack on the Stockade in the early hours of the morning, and the brutal treatment of the rebels, was so great it forced the government to release the rebels without conviction.   No jury would convict any of them.  Public protests and demonstrations drew over 10,000 people every day during the trials in Melbourne.

It was the power of mobilised grass roots mass movement that forced the British colonial authorities to drop all charges, including treason, against the rebels, and concede to some of their demands.

This is what a united people power can do.

The Eureka rebellion is one of the most important and inspiring events in the history of Australia’s working people.  But it was far more than a rebellion against the oppressive government, the police and army brutality and injustice of the courts.  The Eureka rebels put forward a vision of ordinary people for a just, fair, truly democratic and independent Australia.

Eureka gave birth to Australia’s powerful union movement.  To this day it inspires unity, solidarity and courage in the collective fight for workers’ rights across Australia.

For 162 years the Eureka flag has flown above many struggles of ordinary people – in workplaces and communities. It is a powerful statement of ordinary people’s determination to stand up for justice, rights and liberties. It’s a flag of defiance, and resonates in the present day Australia as “where injustice is the law, defiance becomes our duty”.

For past 162 years, from the 1856 battles for the 8-hour working day; the long shearers strike in 1891 in Qld, in the formation of first unions over 150 years ago, and the many workers’ struggles today, Eureka flags fly proudly in many workers’ struggles, inspiring  confidence in struggle and unity of the working people.

Many generations of migrant workers have proudly carried Eureka flags in workplace struggles, and united under the Eureka flag with many other workers of different nationalities, colour and religions.  They have embraced the Eureka flag as the flag of struggle for justice that belongs to all workers, irrespective of colour, nationality or religion.

Australia’s multiculturalism was born at the Eureka stockade in 1854 where more than 20 nationalities – African-American, Asian, Italians, Greek, Irish, Middle Eastern, of different religions, Christians, Jewish, Moslems, Buddhists – united under the Eureka flag and declared their allegiance and solidarity to each other in the fight for justice, equality and real democracy for the working people.  This is the true spirit of Eureka.  It is our legacy to continue the fight.

The Eureka flag is a powerful symbol that unites all working people standing up for justice and a fair go for all, and is as relevant to working people today as it was 162 years ago.

And there are no better examples of why the struggles of Eureka rebels continue today than what’s happening here to CUB55 workers right now.  A huge multinational corporation bloated with super profits, the profits made from the labour of workers, viciously attacks the hard won wages, conditions and the basic rights of all workers to a secure job and livelihood.  They demand workers take a huge pay cut so that a huge multinational can enrich itself even more with bigger profits.   Isn’t that the centuries old story of the rich taking away from hard working, ordinary people?  And that’s what the Eureka rebellion was all about.  Rebellion against the rich taking away from the poor and demanding a more just, fair and democratic country.

And the struggle of Eureka continues today in the fight for workplace rights, health and safety at work, decent wages and secure jobs for working people and fundamental union rights to organise.

That’s why the fighting spirit of Eureka is carried in the struggles against the ABCC and government Inquisitions into unions whilst the bosses are allowed to attack workers’ rights and conditions in the name of bigger mega profits.

That’s why we fight against insecure work, casualisation, abolition of penalty rates and precarious work.

The issues around which the Eureka rebels united are still with us today and yet to be achieved.

The multinational corporations and giant banks pay little, if any, tax, whilst our taxes are being syphoned off from public good – health, education.  Ordinary people’s taxes are subsiding big business profits. How different is that from 1854 where the rich didn’t pay taxes whilst the impoverished gold diggers were being forced to pay for a miners’ licence, hunted down by soldiers and police and gaoled if they didn’t have the licence.

In 1854 the British colonial aristocracy ran the country.  Now it’s the multinational corporations who run this country.

Throughout the union movement and the community there’s a lot of pride in the CUB55 workers.

We dedicate this year’s Eureka anniversary to the courageous CUB55 whose unity, resilience and solidarity is carrying the spirit of Eureka and showing the way forward to all working people in Australia.