This article came from Altmedia, Sydney 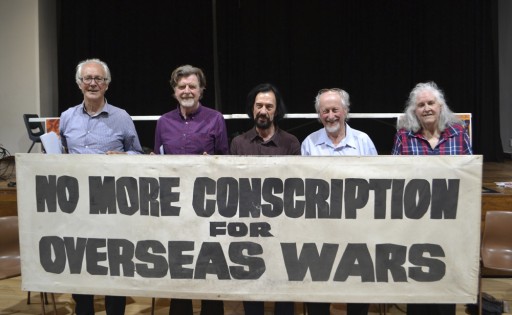 Peace activists gathered at Addison Road Community Centre in Marrickville last week to commemorate the 100th anniversary of the defeat of the WWI conscription referendum.

Two referenda took place under the Prime Ministership of Billy Hughes, the first one in October 1916 and then again in December 1917—both were unsuccessful.

Speaking at the event, activist Hall Greenland said it was “the greatest victory for grass roots democracy in the history of Australia.”
Mr Greenland said the “no” vote defied those in power at the time and that during both campaigns anti-conscriptionists fought hard to battle the strict censorship regulations that were introduced as a war time measure.

“In favour of conscription were five of the six state Premiers, the Prime Minister, all the leaders of the opposition, every major newspaper, every chamber of commerce. Everybody expected conscription would carry the day,” said Mr Greenland.

Historian and author Douglas Newton said it was important to commemorate this unique event.
“When one of the nations involved (in WWI) asked its people, are you willing to give a blank cheque to the generals to fight on as long as it takes, the people said ‘no’.

“They defied all the editorials, the great weight of the press, the emergency legislation and the government and said ‘no’,” said Mr Newton.
Drew Cottle is an historian and senior lecturer at the University of Western Sydney and said the anniversary was a timely reminder to acknowledge the important issues underlying the vote.

“We’re in a period now that glorifies ANZAC and glorifies Australia’s military record but doesn’t consider that Australians in two referenda, in separate years, narrowly voted against military conscription.”

Dr Cottle credited the defeat of the vote to unions such as the Industrial Workers of the World (known as Wobblies) and the Labor Party.
He also noted the important role that women played in defeating the conscription referenda.

Dr Cottle said that despite widespread censorship, “mothers, wives, sisters, aunts were learning of the young men who were being killed at the front.”

Historian and poet, Colleen Burke said women’s groups such as the Women’s Political Association and the Women’s Peace Army were instrumental in rallying for the anti-conscription cause.

“They organised a huge anti-conscription demonstration in Melbourne. It started off with a few thousand people, but by the time they got to the Yarra bank they had between 50 to 80,000.”

Ms Burke said that while it was a peaceful rally, the newspapers at the time reported it differently.

“The Age headline was: ‘Acts of Violence-Wild scenes of disorder attended a women’s anti-conscription demonstration in the city,’” she said.
Hannah Middleton, a lifelong peace activist, said it was important to remember the carnage of WWI in order to understand current worldwide conflicts.

“The loss of life in WWI is an exemplar of just how appalling war is. We should have reached a stage of civilisation in how we resolve matters in other ways. Humanity is precious and we see the destruction of thousands upon thousands of young men, again and again, just for a few yards.
“And as we say it about WWI, about Passchendaele and Ypres, we have to say it about Syria.”

The event also recognised the anti-conscriptionists of the Vietnam War period and an honour wall for peace was unveiled at the entry to the community centre.