Amongst the thousands of people who commemorated the historic Wave Hill walk-off this week were some of the original participants and descendents of the Gurindji stockmen, domestic hands and family members. In 1966 they walked-off the Wave Hill station to protest against the appalling wages, working and living conditions that the British Vestey company enforced on them.

However this protest became more than a civil rights struggle and developed into a fight for the return of  traditional Gurindji land. After a nine year strike the Gurindji won back some of their land, saw the beginning  of a number of land rights acts for other Indigenous nations and inspired the Aboriginal Land Rights movement.

Their victory culminated in the iconic moment when Prime Minister Whitlam symbolically poured soil into the hands of Vincent Lingiari, the Gurindji community leader and head stockman at Wave Hill. One of the first events of the fiftieth commemoration was the opening of the Wave Hill Walk-Off Track, where locals and visitors retraced the steps of the 1966 walk-off on the now national heritage listed tourist trail.

Remembering earlier massacres of their people, the Gurindji walked across country to avoid Vestey’s management. Feared of being shot and horse-whipped by station staff, the striking Gurindji’s armed themselves with boomerang, spear and nulla nullas.

At the opening ceremony of Freedom Day a Bedford truck, the same type that Darwin wharfie Brian Manning used to bring food and blankets to Daguragu (Wattie Creek) during the nine year strike, led a one kilometre walk from Kalkaringi to the Lipanangku waterhole on the Victoria River, one of the spots at which the Gurindji had camped.

Jimmy Wavehill, an elder who had participated in the walk-off as a child, addressed the opening ceremony at Kalkaringi.  He pointed out that Vesteys had always treated the Gurindji badly, however he was thrilled that a large mob had come to the Festival to lend their support. 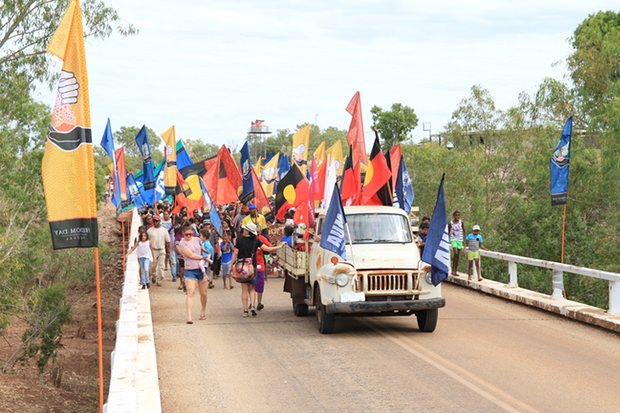 Over the three days of the Freedom day Festival, there prevailed a commitment to continue the struggle for self-determination and sovereignty and a spirit of mutual respect.

Books were launched – the bilingual oral history Yijarni: True Stories from Gurindji Country, and Charlie Ward’s A Handful of Sand; films were shown such as The Unlucky Australians and How the West Was Lost (the latter linking the Gurindji struggle to the massive Pilbara-wide strike by Aboriginal stockmen in 1946); discussion groups at Daguragu focussed on topics like Collective Action, Two Way Law, and Protecting Country Today; and each evening saw great musical performances by the likes of the Lajamanu Teenage Band, the Tjupi Band, Shane Howard, the Mills Sisters, Dan Sultan, the Lipanangku Band, Neil Murray and Robbie Mills; teams from remote communities such as Lajamanu, Yuendumu, Ali Curong played football and basketball.

There was some friction in the crowd when the out of favour Federal Minister for Indigenous Affairs, Nigel Scullion, was challenged by four Indigenous women with their backs turned to him and holding a banner that stated, “No justice, just us!” with a drawing of an Indigenous child looking out from a jail cell. This man, who said he couldn’t be interested enough in the plight of young Aboriginals in custody to bother to watch the Four Corners program exposing abuse at the Don Dale Detention Centre, accused the protestors of turning their backs on the elders on stage and disrespecting the traditional owners of country.

This sparked fury from the audience with spontaneous heckling and interjections and Chants of “Always was, always will be, Aboriginal land” drowning out Scullion’s speech. He left soon afterwards.

The festive mood was best embodied when all of the performers gathered on stage Sunday night, together with the Lingiari family and Celuia Mabo, to sing the Kev Carmody-Paul Kelly song “From Little Things Big Things Grow”.

The walk to freedom continues

From the time of invasion governments, both State and Federal, together with pastoral corporations and big mining companies have fought against Indigenous sovereignty of their land. They have attempted to crush Indigenous self-determination through inadequate health, education, housing, employment services, particularly the malevolent  Northern Territory Intervention and the closure of community out stations.

In the memorable words of Vincent Lingiari, “We want to live on our land, our way” signifies the Indigenous Australia’s just claim to be a sovereign people entitled to control their own country. Will it take another fifty years for non-indigenous Australia to concede the history of invasion, the oppression and exploitation of the Indigenous nations and begin to ‘pay the rent’ and right the wrongs of over two centuries of conquest?