This article came from The Australia Institute 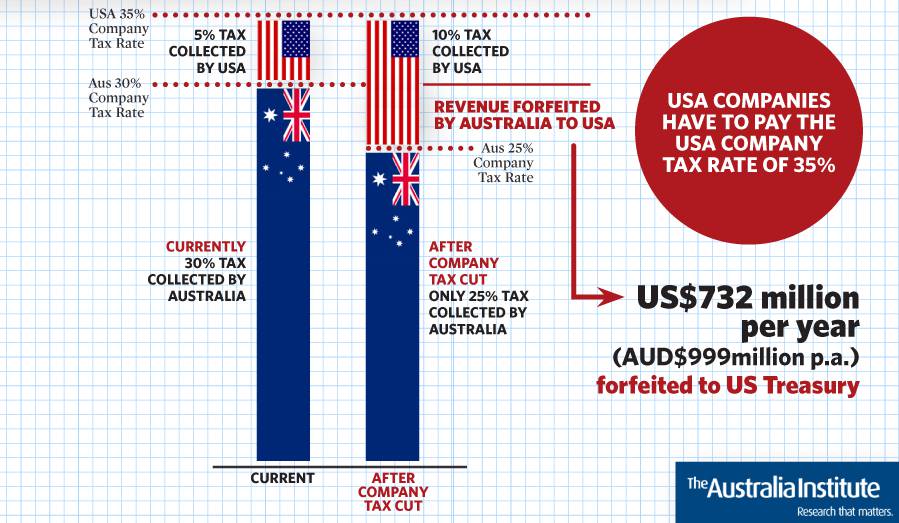 New research, based on US Internal Revenue Service (IRS) data, shows that the proposed company tax cut would see the Australian tax system delivering billions of dollars to the US Treasury.

Australia and the US have a foreign tax treaty to ensure company profits are not double taxed. This arrangement means that companies pay the IRS the difference between the two company tax rates.

Currently the US rate is 35%, while Australia’s is 30%. If that difference grows as a result of a lower Australian rate, the IRS collects more tax at the expense of the ATO.

The cost of this to the Australian tax base will grow through the policy’s introduction phase, reaching and estimated US$732 (approx AUD$999) million per year when fully implemented in 2026-27. In the first decade, once fully implemented the ATO’s gift to the IRS would be US$8.07 billion.

“A key beneficiary of the proposed company tax cuts is the American tax office. Various American companies operating here will not benefit – they will simply pay the difference in the United States,” Executive Director of The Australia Institute, Ben Oquist said.

“American firms operating in Australia will not invest more, employ more or be any more competitive after Australia cuts the company tax – they will simply pay less tax here and more tax in the US.

“The economic case for large company tax cuts has already proven to be poor, with supposed growth dividends within the margin of error and between 10 and 30 years away.  Yet the fiscal price for the tax cut is significant and we know some of the revenue cost is just a gift to the United States government

“It’s important to understand that the US is the largest foreign investor in Australia accounting for over a quarter of all foreign investment. All of those companies will pay the same tax as before, only less to the ATO.

“Previous research has shown that the economic case for cutting company tax rates is poor. Even if we were to accept that cutting company tax did bring ‘jobs and growth’, this is not the case if the company’s tax bill is not cut, but simply transferred to another country,” Oquist said.