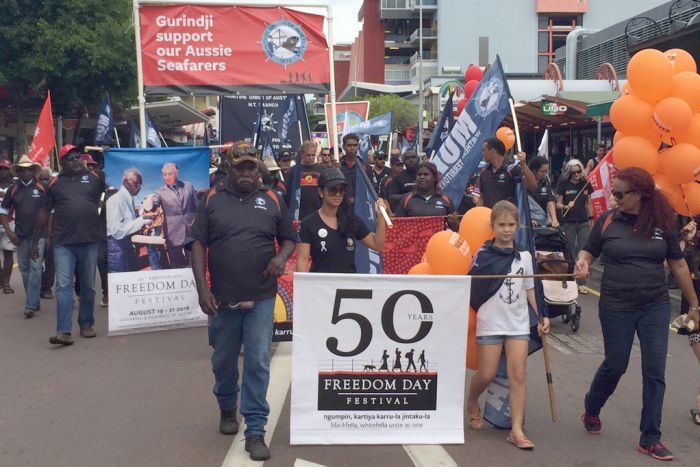 First Nation people who participated in the Wave Hill strike 50 years ago lead this year’s May Day march in Darwin. It was one of the most important Indigenous working class struggles that few know or talk about.

The Wave Hill walk-off started in August 1966 when 200 Aboriginal stockmen, house servants, and family members walked off the job as a protest against poor wages and conditions at Wave Hill Station, about 600 kilometres south of Darwin.

It became a nine-year struggle that eventually saw the improvement of conditions for Aboriginal workers and led to the 1975 land handover to the Gurindji people by the Whitlam Government.

Read below the story of this famous and remarkable Land Rights and industrial struggle. As the song states this event truly was one of, “From little things big things grow”. This outline of the Gurinji people’s struggle came from the Freedom Day History website

The Walk Off Story

In 1966, led by Gurindji leader Vincent Lingiari, the Indigenous pastoral workers of Wave Hill station went on strike, walking away from the stock camp existence they had led for forty years and entering a new period of hardship and negotiation that ultimately changed Australia.

The Walk Off involved families leaving the area of Wave Hill Station, walking along a fenceline toward Gordy Creek, which was found to be dry. The group travelled further to the Victoria River where they established camp. The camp moved, before the wet season of that year and eventually they settled some 30 kilometres from Wave Hill Station at Wattie Creek near a site of cultural significance. 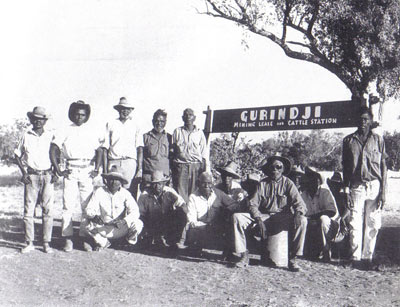 The Gurindji were unwavering in the pursuit of their ideals. Striking initially for wages and living conditions equal to their non-Indigenous colleagues, the struggle of the Gurindji soon spread to include a focus on their own economic aspirations and the more fundamental issue of access to their own traditional land.

After nine years of intense hardship including overt and covert pressure from pastoral and Government-related agencies, they were promised title to their land by the then Prime Minister, Gough Whitlam. In a ceremony in Daguragu in August 1975, the Prime Minister symbolically poured soil into hand of traditional landowner Vincent Lingiari.

The vision and determination of the Gurindji people led to the development of both the land rights movement and a greatly increased recognition of the injustice that characterised the lives of Indigenous Australians, particularly in pastoral areas.

Background to the Walk Off

Gurindji people first encountered Europeans in the 1850’s, when the explorer A.C. Gregory crossed their territory. Several other explorers traversed the area over the following decades until the 1880’s, when large pastoral operations were established. Wave Hill cattle station, which included the Kalkaringi and Daguragu area was first stocked in 1883.
From this period, up until the 1930’s, the Gurindji suffered lethal reprisals for cattle theft. Over time, they slowly moved into the cattle stations, adopting a more sedentary life and working as ringers and domestic staff. In 1914 Wave Hill Station was bought by Vesteys, a British pastoral company comprising a large conglomerate of cattle companies owned by Lord Vestey.

Conditions for the Indigenous workers and their families on cattle stations generally were poor. Pay rates were less than their non-Indigenous colleagues. At this time it was in fact illegal to pay an Indigenous worker more than a specified amount in goods and money. In many cases, the government benefits for which Indigenous employees were eligible were paid into pastoral companies’ accounts, rather than to the individuals.

On Wave Hill Station, there had been complaints from Indigenous employees about conditions over many years. An inquiry during the 1930’s was critical of Vesteys employment practices, but little was done over the decades leading up to the decisive action of 1966.

Recognising the significance of these events

The protest eventually led to the Commonwealth Land Rights Act (Northern Territory), 1976. This Act gave Indigenous Australians freehold title to traditional lands in the Northern Territory and, significantly, the power of veto over mining and development on those lands.

The vision, strength and determination of the Gurindji has been recognised and celebrated in Australian popular culture. Many Australians have become familiar with the story of Vincent Lingiari and the Gurindji through the lyrics and melody of the Paul Kelly and Kev Carmody song From Little things Big Things Grow. Prominent figures including the former Govenor General Sir William Deane, the Administrator of the NT, Ted Egan, and the ‘Father of Reconcilation’, Pat Dodson AM, have helped to reinforce the significance of the Gurindji movement.

A Vincent Lingiari Memorial Lecture is presented each year by a prominent Australian.

In 1998, the Australian Heritage Commission recognised the significance of the Wave Hill Walk Off and associated events, by listing seven of the associated sites on the Register of the National Estate.

1. The area of the old Wave Hill Station known as Jinparrak, and the associated Indigenous living, meeting, domestic and burial areas.

2. The fenceline followed by the Gurindji people in their walk off from this area in 1966.

3. The section of Gordy Creek known as Junarni, where people stopped to dig for water on the walk off

4. The initial camp place on the Victoria River bed, where the Gurindji camped after the walk off.

5. The place adjacent to the Victoria River known as Bottom Camp, where the Gurindji moved to avoid the wet season flooding of 1966-67.

6. The place in Daguragu under a nutwood tree known as First Camp, where the Gurindji camped while waiting for rights to their land and permanent residence

7. The Handover Site in Daguragu Community where Prime Minister Gough Whitlam transferred title to the Gurindji on 16th August, 1975.

In May 2004, a memorial to Vincent Lingiari was unveiled as part of Reconciliation Place in Canberra.